In a scene repeated many times a day, guests have a carriage-eye view of Colonial Williamsburg’s Historic Area. Coachman Dan Hard guides his horses down Duke of Gloucester Street.

Carriage wheels trundle beneath a royal fare on Duke of Gloucester Street. 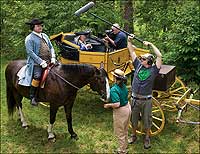 Period authenticity reaches classrooms with a combination of old technology and new in this Electronic Field Trip shoot.

Pounding hooves and rising dust evoke the past for HBO’s production of “John Adams.”

A coach makes the ideal backdrop for a family’s memory of a day spent in the 18th century.

For half a century now, tens of thousands of Colonial Williamsburg guests have opted for a carriage ride through the Historic Area. The horse-drawn drives are a signature experience in the restored colonial capital. Passengers clamber aboard out of curiosity or for the novelty. Passengers like Sue and Jim Rack of Chicago. As he put it: “We just wanted to see what it might have been like to ride around the town.”

Others enjoy the brief celebrity a trip down Duke of Gloucester Street provides. When a coach appears with the horses clopping along, people on the sidewalks stop, look, wave, and snap photographs. The reaction is instantaneous, inevitable, and irresistible.

The Racks said their experience was “great.” They also wondered what it takes to keep these vehicles going.

“You know,” he said, watching the stage wagon head toward the Governor’s Palace, “there must be a lot going on behind the scenes.”

Indeed, there is. At about 10 a.m., three to five vehicles leave the stable just outside the Historic Area and head for a day of touring the colonial community. The drives are the most visible part of an effort that begins much earlier.

“We’re here long before the sun gets up, and we’re still going after it goes down. It’s a long day, seven days a week, 365 days a year,” coach and livestock director Richard Nicoll said.

The routine begins at 7 a.m., when the staff start getting everything ready to roll. That means checking the horses, making sure they’re healthy and fit, feeding them, cleaning vehicles, polishing harness brass, checking leather for wear, and noting whether special events will require extra preparations. The drivers arrive about 8:30 a.m. They groom the horses, get them in harness, make last-minute checks of the vehicle, change into costumes, help put the horses to the carriages, and head for the Historic Area to pick up passengers.

Rides continue until about 4:30 p.m. most of the year, although in summer they can extend until later.

Like a fleet of modern cabs, Colonial Williamsburg’s carriages get a lot of use, far more than their eighteenth-century counterparts did, so maintenance is constant. Iron rims on the wheels wear out, and the blacksmiths and wheelwrights have to repair them. A harness breaks and goes to the harness maker. Carriage steps fail. Bearings wear out. Paint needs touching up. Hay must be hauled and visits by farriers and veterinarians scheduled. And guests are welcomed five days a week when the popular stables tour brings them through the area.

The drivers especially seem to love the work, in part, they say, because it never gets dull. “It’s always changing, it’s always different. People ask me, ‘What’s a normal day?’ We wouldn’t know one if we saw one,” Dan Hard said. He drives the stage wagon, the colonial equivalent of a bus.

Of all they learn on rides, guests seem most surprised by the slow pace of eighteenth-century transportation. A Williamsburg-Richmond trip now takes sixty minutes via interstate highway. In the 1700s, it was an uncomfortable twelve to eighteen hours.

Some days bring special assignments, like appearing in the filming of a Colonial Williamsburg electronic field trip or cooperating with a Hollywood crew. Other times, drivers must deliver interpreters portraying a royal governor or Martha Washington to a program. Then there is the steady stream of dignitaries and celebrities who, over the years, have included presidents and prime ministers, governors, kings and queens, Mr. Rogers of PBS, Wheel of Fortune letter-turner Vanna White, and actors Ed Harris and Richard Dreyfuss. These events require preparation and coordination. Everything must be perfect.

Coachmen have to understand the horses and know how to handle the vehicles confidently and safely. Schedules must be met, tickets accounted for, and emergencies, like a harness breaking, handled.

Drivers must be be good with people, able to make passengers comfortable, and answer their questions, which touch on the animals, Williamsburg, and colonial history. Because the demands of being a driver are so diverse, Nicoll said it is hard to find the right people for the job. “Drivers typically come to us with horse experience but none driving. So we train them. How long it takes to learn depends on the person,” said Karen Smith, supervisor of stable operations.

Training begins with a small vehicle. When that is mastered, would-be coachmen advance to a larger one. The coachman’s art is not just a.m.tter of knowing how to control the horses, a tough skill to master by itself. It involves developing an understanding of how a team works and an intuitive feel for the animals and vehicle.

“On average, it takes two years before you’re comfortable as a driver. But, even then, you realize that it’s a lifetime learning experience,” Nicoll said. “The horses continually are teaching you and humbling you.”

Hard, a coachman since 1991, said, “I’ve probably worked with over a hundred horses in my life. I’ve learned something from every one of them.” Clearly, it takes a lot of time and effort to keep the carriages rolling through the Historic Area. Is it worth the work? Nicoll said:

“If you didn’t have the carriages on the streets, you’d be missing a part of what was eighteenth-century Williamsburg. With them, you get a feel for the animals and the moving vehicles. They’re a.m.st a trademark for Colonial Williamsburg. They add to the historical interpretation. And, for our guests, they add an ambience, an experience, and a real sense of the period.”

See a slideshow of celebrity carriage rides, from Lassie to the queen of England.