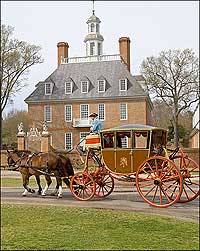 Rolling by the Governor's Palace, the new town coach was built to suit Lord Dunmore, the last royal governor of the colony. (Dave Doody) 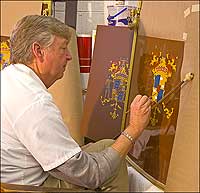 Expensive and elegant, an eighteenth-century town coach bespoke money, position, and privilege. "If a town coach with four horses came around a corner, without a doubt, everyone who saw it knew the owner was a person of substance," said Richard Nicoll, Colonial Williamsburg's coach and livestock director. "In a similar way, today, if a Rolls Royce drew up, you'd know that the owner is wealthy."

Just as people did two centuries ago, Colonial Williamsburg guests are craning their necks to see who the important person is riding in the town coach on Duke of Gloucester Street. The vehicle is the latest addition to a carriage and wagon collection that rolls through the Historic Area daily. Nicoll says it will enhance—just as the others do—the town's 1700s ambiance. "When this carriage goes down the street, it instantly says: 'You're in the eighteenth century.'"

It is a highly accurate reproduction of a European museum original, the product of lengthy research, Old World craftsmanship, and a full appreciation for the prestige of such a carriage. Nicoll has wanted to add one to Colonial Williamsburg's fleet since the 1990s. The effort began in earnest in 2003. An early challenge was determining who in eighteenth-century Williamsburg would have had the need and the means for such an item. The answer appeared in an advertisement by coachmaker Elkanah Deane in the Virginia Gazette of October 23, 1773: "I made, in the city of New York, for his Excellency the Right Honorable the Earl of Dunmore, a coach, phaeton, and a chaise, which may now be seen by any gentleman that has an inclination."

John Murray, Earl of Dunmore, was governor first in New York and later in Virginia. As a symbol of British imperial authority in both colonies, Dunmore would have wanted a vehicle as impressive as his power. He provided the connection Nicoll sought.

As its name implies, the town coach was used on paved streets in urban areas. It was not designed for rugged country roads. It was popular and desirable, expensive, and beyond the means of most people. Buying one started a string of associated costs—bills accumulating rapidly for horses, feed, tack, stables, grooms, drivers, and coachmen. Like modern automobiles, coaches required regular maintenance, not only a good cleaning after a jaunt on a filthy street but touch-up painting and replacement of major parts.

Owners were generally rich or aristocratic or both, and on either side of the Atlantic, the town coach became an icon of status. George III sent a town coach to Virginia Governor Lord Botetourt to ensure he traveled through Williamsburg in a style befitting the crown's representative. Carriage parades were a standard feature of society life in 1700s England. Owners got to show off, and the public got to gawk. Newspapers provided coverage rich in detail—a trove of information for modern researchers.

When he began looking for an original as a model for a Colonial Williamsburg reproduction, Nicoll turned to the carriage collection of the Musei Civici di Palazzo Farnese in Piacenza, Italy. There, he saw an ideal antique, the Berlina di Gala. It was perfect in every detail—styling, features, and age. The next step was to find funding for the project. It came from longtime Colonial Williamsburg supporters James and Maureen Gorman of Maine.

Nicoll now needed a carriage builder. The trade is an all-but-lost craft practiced by a handful of people. One is Florian Staudner, with whom Nicoll collaborated on an earlier, Gorman-funded Colonial Williamsburg coach. Working in a two-man shop in Oberlaa, Austria, near Vienna, he serves museums, carriage collectors, and people who drive coaches for a hobby.

Staudner visited the Palazzo Farnese to study the original. He made photographs and detailed drawings to guide him through the project, supplementing those with his knowledge and experience. 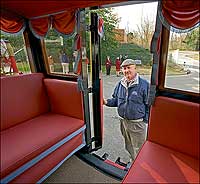 Beginning the work in late 2004, Staudner primarily relied on twenty-first-century tools. It was an accommodation to economic reality; eighteenth-century tools and techniques would make reproduction too expensive and time consuming to be practical. Nevertheless, the Dunmore coach required handwork for upholstery, painting, and some forgings.

Staudner made Williamsburg's town coach look and function like an original. But it had to endure more robust service than such a vehicle would 200 years ago.

"We looked at using this coach in the Historic Area on a daily basis," Nicoll said. "For example, the door will open and close at least thirty times every day. We need to keep that sort of thing in mind, but we don't want to lose an accurate historical appearance."

Nicoll and Staudner stayed in touch throughout the project. Language was not a barrier, although Staudner speaks no English and Nicoll speaks no German. Both men understand how a coach works and how it must be built. They relied heavily on the facsimile machine to transmit drawings as they worked through the hundreds of details that cropped up. Nicoll made one brief visit to the Austrian shop midway through construction to inspect and to approve work, and to plan the final stages of the carriage with Staudner.

The process advanced smoothly to completion in late 2005. Early in 2006, the finished coach was packed into a metal container and shipped assembled to Virginia for a few finishing touches, including the addition of door handles and harness buckles made in Colonial Williamsburg's Geddy Foundry, and the addition of Dunmore's coat of arms to its doors, painted by Phil Moore of Colonial Williamsburg's paint shop. Chris Wright, a Colonial Williamsburg riding-chair maker and vehicle body specialist, researched the coat of arms. He found the Dunmore insignia is two "savages," a wild beast, a knight's helmet, stars, checkerboard patterns, and the motto Furth Fortune, a Latin contraction for: "Go forth and good fortune attend you."

The coach supports historical programs and is available for guests who want to ride in it. It also provides an easy answer to a long-asked question in the colonial capital.

"For years, people have asked interpreters when a coach passed by if that was the governor's carriage. And, for years, we've had to say no," he said. "But, now, well, we can answer: Yes. It is."

Ed Crews, a Richmond-based writer, contributed to the spring 2006 journal an article on Colonial Williamsburg's basketmakers.