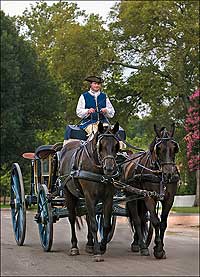 The Canadian horse attracted ardent admirers during the breed’s heyday in the late 1700s and early 1800s. The animals were strong, reliable, even-tempered, hardy, and adaptable. Somebody a long time ago dubbed the Canadians “the little iron horses.” That nickname still applies.

For more than 300 years, they pulled plows and carriages, carried farmers to markets, and took cavalrymen into battle. They played a role in the formation of three well-known breeds—Morgan, American Saddlebred, and Standardbred.

During the colonial period and the early days of the Republic, when horses were expensive, having one that could do many things was a blessing, especially for farmers.

Given its virtues and former popularity, it is a sad fact that the Canadian Horse has all but faded from North America. Today, the American Livestock Breeds Conservancy, which is dedicated to saving endangered domestic animals, has placed them in its “threatened” category, the second-most endangered rating it gives. Estimates of the number of horses surviving worldwide range from 2,500 to 4,000.

Colonial Williamsburg is helping to revive “the little iron horse.” Three work in the Historic Area, being ridden by interpreters and pulling carriages and the riding chair. Visitors notice these eye-catching animals. Adult Canadians typically are about five feet tall at the withers. They weigh about 1,000 pounds. They are well proportioned, and their strength is recognizable in their solid, muscled frame. They typically are black or bay with full manes and tails.

From the brink of extinction, Canadian Horses have come back. In 2001, Colonial Williamsburg added them to its rare breeds program.

“They seem to be intelligent with good personalities,” Nicoll said. “They’ve worked well in our system. I like working with them because they’re sensible animals.”

The Canadian horses that travel the Historic Area’s streets come from a rich, long, and royal lineage. The breed traces to the late seventeenth century. In 1665, King Louis XIV shipped two stallions and twenty mares from his stables to the French colony of Quebec, and sent more in 1667 and 1670. Some historians believe that all of them came from quality stock in Normandy and Brittany.

Louis’ gifts to the colony thrived. By 1720, Quebec had 5,275 horses. The rugged conditions in this northern area shaped the breed’s capabilities, character, and appearance. Natural selection produced an animal that could endure cold climates and thrive on comparatively little food. The horses were energetic, reached maturity relatively quickly, and lived long lives. They also demonstrated the ability to multi task.

Starting in the early 1800s, Canadian Horses developed an enthusiastic American following, especially in New England. A brisk export market arose. This trade exploded during the Civil War when the United States Army bought thousands for cavalry mounts. That greatly depleted the number of these animals in their native land. Crossbreeding also seriously thinned the original stock.

Speaking to an agricultural committee of the Canadian parliament in 1909, Dr. J. G. Rutherford, Canada’s livestock commissioner, lamented the harm done. He noted that soon after the Civil War “short sighted livestock reformers, who, by the introduction of stallions of many different breeds, succeeded in almost entirely destroying the identity of the native strain.”

Others had noticed the problem and acted to rescue the Canadian Horse in its original form. In 1895, a group of concerned individuals had formed the Société des Eleveurs des Chevaux Canadiens to do just that. The government helped with stock standards and selections, and established breeding programs.

The initial effort at Cap Rouge, Quebec, began in 1913. Animals were chosen carefully for breed conformation and such attributes as courage, vitality, and endurance. Six years later, another stud farm opened at St. Joachim, Quebec, and ran until 1940. One other effort at the La Gorgendière Farm School operated until 1981. When it closed, the stock was auctioned.

Despite government intervention, the number of Canadian Horses declined sharply after World War II. “The numbers dipped because of mechanization on the farm,” Nicoll said. “The Canadian Horse was a farmer’s horse. When machines came to the farm, they no longer were widely used.

“People didn’t need horses to do the work. They didn’t even need them to haul a milk cart to a nearby village. As those tasks declined, it sounded the death knell for a lot of breeds.”

“Has the Canadian Horse been a good fit for Williamsburg? Yes. It gives us a chance to talk with visitors about the breed,” Nicoll said. “It gives people a direct contact with these animals. And it’s good for people to see them. We can support the saving of the Canadian Horse by showing them, talking about them, and getting people interested in them. Having them here gives us a chance to spread the good news.”