Colonial Williamsburg's master cabinetmaker studies eighteenth-century furniture, examining the joints, carvings, and finish of a desk or table or chair, frequently marveling at the skills and artistry of the craftsman who made it. "When I look at a piece of old furniture, I often am humbled by the subtleties, thoughtfulness, and refinements I find," Mack Headley Jr. said. "The person who created it tried to make it special and to give it a personality. You can still see these qualities today, more than 200 years after the work was completed."

The son, grandson, and great-grandson of furniture makers, Headley has scrutinized, repaired, restored, and reproduced antique furniture for almost four decades. He began as a teenager during the late 1960s in his father's Clarke County, Virginia, shop. Headley joined Colonial Williamsburg in the late 1970s and heads the interpretive and craft efforts at Hay's Cabinetmaking Shop on Nicholson Street, working with journeymen Kaare Loftheim and David Salisbury, and apprentices Ken Nuttle and David Wait.

"At the shop, we try to rediscover and preserve the eighteenth-century cabinetmaker's trade," Headley said. "This is mostly done by replicating Tidewater furniture. We use antiques as patterns. From them, we learn about the furniture's structure and decoration.

"Eighteenth-century furniture was artistically and structurally more refined than in any period previously or subsequently."

Economics were the primary reason. Before 1650, fine furniture was a rarity in western Europe and North America. Generally, people neither needed nor could afford it. They made do with simple but serviceable pieces. That changed when international trade fueled a business boom and created a middle class hungry for status, comfort, and more wealth.

"The furniture was about more than function," Headley said. "The middle class was networking and socializing. If you wanted to participate in the economy, then you needed certain things to facilitate your success. Furniture was part of the process."

The market's appetite for furniture stimulated the creation of cabinetmaking shops across Great Britain and British North America. Although cabinets were a specific type of furniture, the term "cabinetmaking" applied to all furniture construction. By the mid-1700s, superb products were coming from top English shops, like Thomas Chippendale and Vile & Cobb, which served King George III. Some wealthy Virginia planters imported furniture. Most buyers, however, patronized Tidewater craftsmen. Williamsburg became the colony's leading furniture production center. By the 1770s, the town had six shops catering to merchants, planters, tradesmen, and politicians from across the state, including Thomas Jefferson. Peter Scott and Anthony Hay, among others, had long, successful Williamsburg careers.

Bostonians and Philadelphians liked furniture elaborate in construction and decoration. Virginians, however, preferred their furniture "plain and neat," which implied modest elegance and solid construction. Practical, they wanted attractive yet durable items. Though Williamsburg-made furniture rarely achieved the pinnacle of top British craftsmanship, domestic goods often compared favorably with second-tier British products, like those from the shop of Philip Bell. 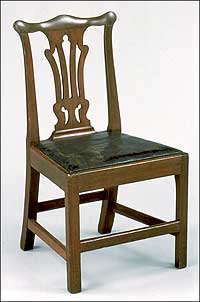 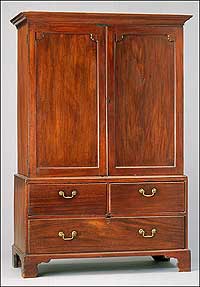 Like their European counterparts, successful Virginia craftsmen had to combine contemporary technology, artistic sensibility, and skill. An apprentice cabinetmaker had to learn much. He had to master such tools as saws, planes, drills, spokeshaves, drawknives, and chisels. Then, he used them to perfect construction techniques—dovetails and mortise and tenon. He also learned how to apply finishes and what kind of finish to apply—high gloss to reflect candlelight, or something understated to bring out a grain. An apprentice with ambitions of owning a shop also had to become adept at reading, writing, arithmetic, geometry, and bookkeeping.

The trade required artistic and aesthetic sensibilities. Masters usually tried to develop these in apprentices by having them practice drawing and study design books about Greek and Roman architecture. Particularly popular were the ten books of architecture by the Roman Vitruvius. Cabinetmakers who learned classical ideas about balance and applied them transcended craft and entered the realm of art.

"I think the most interesting thing about eighteenth-century cabinetmaking for me is the wonderful refinement of proportion and line," journeyman Loftheim said. "And it is probably the area that I understand the least. It's not accidental that the forms of many period pieces still set so well with us today. They understood that attractive physical spaces have a mathematical-geometrical relationship."

According to Headley, the most important knowledge a cabinetmaker needed was a full appreciation of the interaction of his tools and wood. This meant understanding wood growth and how to use it to advantage. Apprentices quickly learned that these properties varied with wood types. Virginia furniture was made from American black walnut, mahogany, poplar, yellow pine, oak, and beech. For all, cabinetmakers had to be aware of how Virginia's humidity made wood shrink and swell, and how to construct furniture to allow for it without splitting.

Of all the items of furniture, chairs could test their abilities most. "Chairs are generally considered the most challenging form in the trade to master," Loftheim said. "There are so many things that have to come together. Many of the skills required are layered on top of skills previously learned. Everything is angled; nothing is simply at 90 degrees. Parts are relatively small in cross-section, and you're supposed to be able to sit on it."

Cabinetmakers also had to work fast. In a preindustrial age, the slowest cabinetmaker was often the least successful. Speed was affected by materials, size, finish, and ornamentation. A fancy desk with an attached bookcase might take 600 hours of work. Most of that was in planing and sawing. A simple chair might require thirty to thirty-five hours.

Although eighteenth-century cabinetmakers could create beautiful furniture in a comparatively short period, individual craftsmen could not compete with the quantity or price of mass-produced goods made in factories during the Industrial Revolution. Handmade furniture all but disappeared by the 1850s.

Today, the cabinetmakers at the Hay's shop are recapturing and preserving eighteenth-century skills. The shop is filled with workbenches and tools. Wood shavings litter the floor. Sunshine streams through large windows, providing good natural light for detail work.

Here, Headley and his colleagues labor on projects designed to expand their knowledge of Tidewater workmanship. Recent projects have focused on the furniture of Williamsburg's Peter Scott. Modern apprentices are getting in-depth experience, replicating some of his chairs. Other projects ahead include a bureau table, a writing table with inlay work, and a tall case clock, which will be studied at Colonial Williamsburg's 2004 woodworking program.

The shop is on a quest for knowledge and mastery of the cabinetmaker's art. That means building reproductions, studying antiques, and, every once in a while, seeing in them the still-living craftsmanship of an earlier age.

David Wait clamps a piece of wood into a vise on the workbench.

David P. Salisbury adjusts a vise to hold a piece of wood.

Quicktime video excerpts from Colonial Williamsburg's "The Art and Mystery of the Cabinetmaker Crafting a Card Table" video.

The master cabinetmaker uses a handmade saw to work on details of the card table.

Mack Headley Jr. uses a razor sharp chisel to make a cut for a hinge.

Richmond writer Ed Crews is the author of a long-running journal series on colonial trades. His story on carpentry appeared in the spring 2003 magazine.