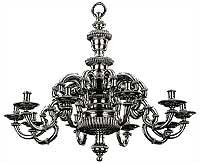 Commissioned by William III, the Garnier chandelier hangs in Colonial Williamsburg's DeWitt Wallace Decorative Arts Museum. The other remaining chandelier of the group is in Hampton Court Palace.

One of the gulfs between the colonial experience and our own is that we can turn night into day at the flick of a switch. It is something we take so much for granted we barely give it a thought. Unless it fails. Colonial Williamsburg guests seem to spend little time pondering this—though nearly all register delight when entering a candlelit building at night. That experience seems to many like a romantic vision of the past come alive. Others react to the aesthetics of it more keenly than when they have seen the same building by day.

Something of the same contrast marks visitors' responses to the elegant objects fashioned in the past to hold the candles. Finely displayed as they are, important lighting devices in the DeWitt Wallace Decorative Arts Museum seem not to arouse much admiration unless they are pointed out and their virtues explained.

They were statements of social position.

Compared to earlier times, huge numbers of objects were made in the eighteenth century to light interiors and add grace to them by their felicity of design. Far more of them have survived than earlier ones. In addition, candles became more affordable, wax and whale oil, or spermaceti, types being cleaner and longer burning than the earlier tallow. To the ever-increasing number of eighteenth-century consumers it must have seemed that impenetrable darkness was at last retreating before the forces of modern life. Candlesticks, candelabra, chandeliers, and lanterns proliferated, fashioned from expensive materials like silver or silver-gilt, from novel substances like porcelain or colored stone, or from brass, pewter, or tin.

These devices ranged from the simplest, such as oil lamps, to the socially spectacular. The latter were meant to attract attention, and they did, with comments like "magnificent," "luminous," or "splendid." In their number, material, newest fashion, or lavishness, they were statements of social position or ambition.

The pattern for this was set, as in much else, by Louis XIV, particularly in his Galerie des Glaces at Versailles. Built between 1678 and 1680, this Hall of Mirrors was the largest of a suite of three galleries, lighted by dozens of massive silver chandeliers and candelabra. Hundreds of candles reflected and re-reflected in the mirrored walls, creating an effect that appeared, to many who witnessed it, "stupendous." They understood that this was also what they were meant to think of the man who'd commissioned the objects—the king of light. But candles lasted only a few hours, and the elaborate silver devices lasted only ten years before they were melted down to pay for the king's wars. Hall and monarch lasted longer.

In the following decade his arch-rival, William of Orange, recently become King William III of England, ordered similarly grand silver chandeliers, though in a less profligate manner. Five were listed in a 1721 inventory, some of which may have dated from the reign of his successor, Queen Anne. Two of the five are known today, one hanging at Hampton Court Palace, near London, for which it was made. The other was created for St. James's Palace in London. This is now at Colonial Williamsburg. It is something no other museum or collector can claim.

Splendid and rare as it is, the chandelier hung in the Governor's Palace at Colonial Williamsburg for almost thirty years before its identity was discovered. When it was disassembled and examined in the mid-1960s the marks of goldsmith Daniel Garnier were found in the form he is known to have used from 1691 to 1697. This proved that the piece was fashioned in London and was clearly one of the chandeliers recorded in the royal collections a few years later.

William III commissioned the piece from a recent refugee from Louis's repressions of religious dissent. A Protestant, Garnier was one of many so-called Huguenots who fled to England after their rights were revoked in 1685. These immigrants included highly skilled craftsmen, conversant with the latest French styles that then led all Europe. Through his patronage of Garnier and other compatriots, which unsettled the native-born English tradesmen, William made a political statement.

For his new sovereign, Garnier created a highly refined object. In style it shows the classical development of the late baroque in France, which quickly spread to Holland and England. In size it is imposing—more than two feet tall and three feet in its spread, weighing 721 ounces of silver, in addition to the iron core that holds it together. 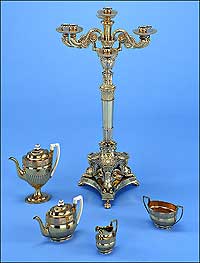 Another piece in the Colonial Williamsburg collections, a gift of the Harry Coon family, this silver-gilt candelabrum belonged to the Duke of Cumberland, George III's youngest son. Three feet high, it displays winged sphinxes, reflecting the taste for "Egyptian" style of the early nineteenth century.

Ten "nozzells" and elegant arms spring out from the complex baluster shaft. The arms are shaped into a curve and reverse curve, or cabriole, form—a basic element of the baroque—and the shaft is boldly articulated with expanding and contrasting rhythms, and further defined with gadrooned bands of different widths. The same gadrooning appears on nozzles and arms. Light from each candle reflected in pinpoints on the hundreds of individual gadroons, and more broadly on the plain surfaces. The total effect is brilliant.

Louis XIV's chandeliers went to the melting pot, and Garnier's masterpiece nearly did too, though not for another hundred years. In 1808, when the Prince of Wales separated from his wife, a number of large silver items from the royal collections were de-accessioned and sent to the royal goldsmiths, Rundell, Bridge, and Rundell, to be turned into a cash settlement for the princess. The goldsmiths seem not to have been quite precise in the way they carried out their orders. They quietly sold the items to some of their best clients.

The chandelier reappeared in public view in 1924 at a Christie's auction in London of Sneyd family heirlooms. It had graced the family's Staffordshire estate, Keele Hall, for decades. The top bidder was the American magnate and obsessive collector, William Randolph Hearst. It was on the market again in New York fourteen years later, when John D. Rockefeller Jr. bought it for Colonial Williamsburg. It soon adorned the newly reconstructed Governor's Palace, where it was seen by millions during the next forty years.

At the time the ailing and exasperated George III was trying to come to terms with the profligate ways of his eldest son, the Prince of Wales, his youngest son, Ernest Augustus, was indulging in some conspicuous consumerism of his own. Colonial Williamsburg owns an item from his buying spree of 1806—a majestic silver-gilt candelabrum in the latest fashion. It bears the royal arms for this son, the Duke of Cumberland, and was one of a larger set, perhaps four or six, perhaps twelve or more.

This new fashion was the Egyptian style. Piranesi, the Italian designer-draughtsman, was influential in its introduction into European culture during the last quarter of the eighteenth century. By the 1790s it was the rage. In the first years of the new century the really affluent developed a taste for examples of massive display plate in this style, especially from the royal goldsmiths. They commissioned most of these pieces from the firm of Digby Scott and Benjamin Smith, whose mark is on this royal candelabrum, with the date letter for 1805-6.

Roman elements—sometimes of the kind discovered by archaeologists in Egypt, sometimes made up—figure among more obvious Egyptian motifs like winged sphinxes, but the overall effect is clearly more exotic than classical Roman designs. Even with this yard-tall object, the impression is one of complex detail and richness. Deeply sculptured lion's feet and masks, eagle's wings, human feet and masks, anthemions, acanthus, gadrooning—all are of differing scale, yet all are coordinated and harmonious.

With so much ornate, gilt surface, the reflected candlelight from the six branches and the central nozzle is dazzling. Imagine the effect of a row of them on all the silver and gold cutlery, the china, and the glass laid out on a huge dinner table.

A perfect illustration of the Georgian "Rule of Taste" 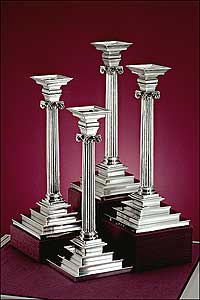 Emblem of the Wallace Museum, these silver candlesticks were made by Paul de Lamerie in mid-eighteenth-century London. The classical symmetry and simplicity of form reject the ornateness and complexity of the baroque and rococo.

Smaller in size but equally impressive in quality is a set of four candlesticks made by the renowned silversmith Paul de Lamerie in London in the mid-1740s. While columnar candlesticks appear in the late seventeenth century, and proliferate in the later eighteenth century, this set, we believe, is unparalleled. What sets it apart is when it was made and how.

In contrast to the taste of the 1740s and '50s—the rococo, which we associate with the designs of the cabinetmaker Chippendale and with de Lamerie's own ornate work—the craftsman fashioned these sticks in a refined classical style. The purchaser, Kenrick Clayton of Marden Park, Surrey, probably had something to do with their form, though that is not proven. His and his wife's coats of arms are engraved on each piece, but nothing more is known of them.

Each fluted column is slender and fine, and the Ionic capital neatly detailed. The fully delineated entablature above is extraordinary. Complete and architecturally correct, in miniature, it is this feature combined with the broad stepped base that makes the candlesticks so distinctive, and indeed masterful. The emphasis on classical antiquity, in the midst of the anti-classical rococo, and on the foundation of classical correctness and harmony—namely, the column, its base, its few variant capitals, and its entablature—makes the set a perfect illustration of the Georgian "Rule of Taste."

This was a philosophy as much as an aesthetic. It was underpinned by a broad knowledge of the classical world, including its architecture. And it depended on understanding how the measurements and proportions made that architecture, in the opinion of the time, the most perfect expression of man's creativity. It guided, perhaps dominated, the Augustan Age, and provided the constant background against which the baroque and rococo styles were relatively minor expressions.

Chippendale's great pattern book, The Director, now considered the touchstone of the rococo in England, features the classical orders as its first illustrations. The author said that without fully understanding the orders, and the ability to draw them, craftsmen would never create designs of worth or validity, nor get them on paper convincingly enough to explain them to others, including prospective patrons.

It is doubtful if king, duke, or knight considered their lighting devices works of art. Their definition was narrower, focusing on ancient art, architecture, and old master paintings, not on the furniture and household wares that seem so splendid to us now. Each would have been mindful, though, that they represented a sizable investment, even melted down. Each, I believe, appreciated the virtuosity that went into the fashioning of them, and understood how they represented a superior attitude towards social position, tone, and fashion.

For us, with our broader definitions of what constitutes a work of art, each of these items is a singular expression of a period and a style, a visual lesson in protean magic of form and rich sparkle of surface, and an experience in perceiving beauty of line and detail and color. 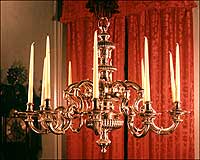 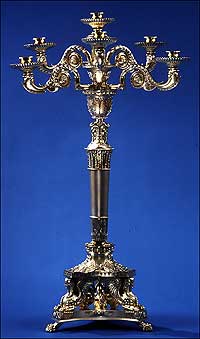 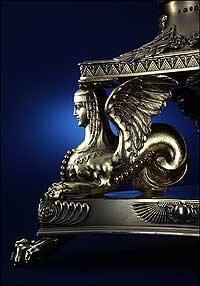 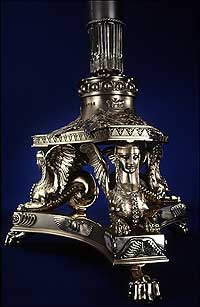 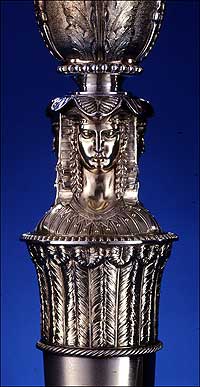 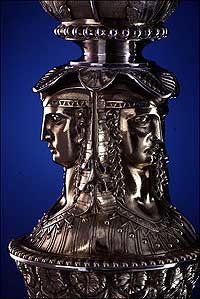 Graham Hood, Colonial Williamsburg's vice president for collections and museums and Carlisle H. Humelsine Curator until his retirement in December 1997, writes from his home beside the Chesapeake Bay. He contributed to the summer 2004 journal an article on the Tompion clock.