« Back to main article “The War” 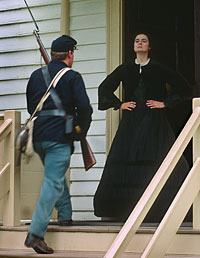 The Betrayal of Captain Bolling

Denizens of occupied Williamsburg bequeathed to their descendants memories of indignity and martial law during the War of Northern Aggression. The Williamsburg Garden Club collected some of the recollections for A Williamsburg Scrapbook, published in 1932 by The Dietz Press. Among them was this tale of double-dealing.

During the Civil War and for many years afterward the house next to the Tucker House was occupied by Mr. Montague Thompson, his sister Mrs. Sully living with him. Both are famous characters in Williamsburg legends.

In the Tucker House during the last days of the war there were only Mrs. Beverley Tucker and her youngest daughter, Zettie. Even the servants, many of them trusted family friends all their lives, were infected with the prevailing restlessness, and one at a time disappeared until there was almost no one to run the big rambling house for the two ladies.

Zettie, her mother said in a letter written at this time, refused to be depressed and made "a joke even of the sweeping of the endless floors."

One morning while engaged in making up the great four-poster in the east room where she and her mother slept, Zettie called to Mrs. Sully, who appeared at one of the west windows of her house, and a jesting conversation was carried on across the intervening garden.

"Tell Captain Bolling," called Miss Zettie, "that he had better be more careful. I saw him down at the back of the garden yesterday in broad daylight. If he isn't more careful, the Yankees will get him."

The next morning Mrs. Sully awoke to find her house guarded by Federal sentries, and she was informed that she must report at the Headquarters of the provost marshal.

Mrs. Sully obediently reported to the officer and was told that she was suspected of concealing a Confederate soldier in her home; and Miss Zettie Tucker's warning, which had been overheard, was quoted to her as evidence. Mrs. Sully made no denial of the accusation, but when asked if she would give Captain Bolling up to the Federal authorities, she quietly agreed to do so. She was escorted down the street and across Court Green back to her house by a detachment of soldiers ordered to arrest the captain.

Entering the front door, Mrs. Sully went right through the hall to the back porch, where she took a pan of corn from a shelf and went out into the yard.

"Chick! Chick-chick-chick-chick!" she called, to the bewilderment of her guard; and as the poultry scrambled around her, she said, "There is General Lee," pointing to a handsome rooster. "That other one is General Magruder; and that fellow," pointing to a "frying-size" cockerel who hovered, hungry but shy, on the edge of the group, "is Captain Bolling. You can have him if you can catch him."

« Back to main article “The War”