Smart as an Ox 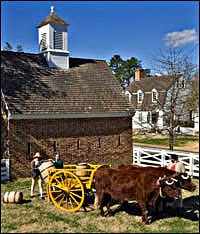 Darin Tschopp stands by Red and Rusty, his team of Milking Shorthorns, while Eric Hunter, left, and cooper Jonathan Hallman loads barrels onto an oxcart. One team is capable of moving loads of several tons, hauling bricks or clearing downed trees.

An oxcart driver at Colonial Williamsburg for five years, Darin Tschopp doesn't get the expression "dumb as an ox" anymore. The longer he works with these cattle, the less sense the cliché makes to him.

Of course, Tschopp may be prejudiced. He likes and understands these gentle giants. He knows their personalities, preferences, and capabilities. He talks about them by name, often pairing them in conversation, as he does at work, in two-animal teams, like Red and Rusty, and Timer and Tuck. Working together, Tschopp, the oxen, and fellow driver Eric Hunter have pulled loads of brick and wood in the Historic Area and plowed fields and moved downed trees at Great Hopes Plantation. Tschopp's experience has taught him that these "dumb beasts" can outsmart a human.

"Whoever came up with 'dumb as an ox' never worked with them. These are bright animals," Tschopp said. "In a way, they're just like kids. They'll see what they can or can't get away with. They'll test you. They'll look for ways to get out of work. They need to know you're the boss, or they'll take advantage of you."

Despite their size, oxen don't need tough handling, he said. They follow commands given in a whisper. Yet they do need handlers to give clear instructions and to set firm boundaries. If you can do that, Tschopp said, it's amazing how much the animals can accomplish.

Like Williamsburg's modern oxen, their colonial counterparts had the size and strength for heavy tasks. It's what made these animals valuable in the European settlement of North America.

"During the colonial period, oxen were critical," Tschopp said. "They provided the power for big, heavy jobs. They were the trucks, tractors, and bulldozers of their time."

Oxen were commonplace in British colonies starting in the 1600s. Plantation owners and small farmers relied on them for all sorts of tasks as well as for milk, meat, hides, and fat. During the Revolutionary War, oxen hauled supplies; they were links in the Continental Army's logistical network. In September 1781, Williamsburg citizens saw what was probably the largest assemblage of cattle in the town's history when George Washington's supply column passed through on its way to the Battle of Yorktown.

Oxen remained the main beasts of burden until late in the nineteenth century, when horses and mules replaced them.

Colonial Williamsburg has used oxen in historic interpretation for more than four decades. Holsteins came first in 1963 for "Life on the Street" programs. Over time, the Holsteins were replaced by two rare breeds.

The Coach and Livestock Department has eight oxen—Milking Shorthorns. It has also used Randalls. The American Livestock Breeds Conservancy recognizes the breeds as endangered. By caring for and using these animals in educational programs, Colonial Williamsburg is helping to preserve their bloodlines.

The Milking Shorthorns are one of the oldest recognized breeds in the world. They came to the United States, Virginia specifically, in 1783. Their forerunners apparently existed during the 1500s in northeastern England.

Milking Shorthorns spread rapidly across the United States. Farmers in the North and Midwest readily accepted them, and the first herd was established on the west side of the Mississippi River in 1839. During the nineteenth century, American farmers admired the animals for their strength, the quality of their meat, and, most important, their milk. But by the early 1980s, Milking Shorthorns were in dire straits. Thanks to a concentrated twenty-year rescue effort, about 10,000 of these red and white cattle now exist worldwide. 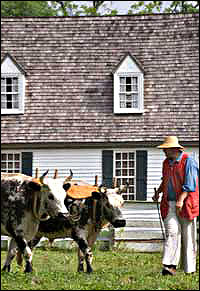 Darin Tschopp with a team of Randall oxen. Their numbers have grown to about 200 from a low of twenty in the 1980s.

Much is known about Milking Shorthorns, but relatively little information is available on the Randall breed's history. These black and white cattle originated in New England, and are named for the Randall family of Vermont, which had a herd of them throughout the twentieth century. The breed's lineage is unclear, but experts believe it may include cattle from Holland, Britain, and France.

By the early 1980s, the Randall breed had dwindled to a handful of animals. Cynthia Creech of Jefferson, Tennessee, heard about the situation and brought Randalls to her farm—the start of the breed's rescue. Progress has been slow, and the breed remains in a critical situation. About 200 of them now exist, up from the twenty or so animals alive two decades ago.

The Milking Shorthorns and the Randalls are a perfect fit for Colonial Williamsburg. They're docile, undisturbed by crowds, strong, and easily trained. Their education begins early. Youngsters involved in 4-H projects begin working with the oxen when they are calves, getting them used to being handled and guided by humans. Then, they move on to commands. The animals can learn about twenty. They begin with the simplest.

"You start by teaching them 'forward' and 'stop.' Once they have these commands down, you go on to 'gee'—right—and 'haw'—left. Eventually, you teach them to back up, but it's tough because it isn't natural for cattle to walk backwards. They don't like it because they can't see what's behind them," Tschopp said.

After oxen have learned commands, they can work with light loads until they reach maturity around age four, when they can handle heavy jobs. An ox typically can work with loads two to three times its weight. A two-animal team usually can manage several tons.

Thanks to their size and strength, the oxen are the stars of the show whenever they appear in the Historic Area. Guests cannot resist seeing them up close.

"Everybody loves them," Tschopp said. "When we go down the street, people actually run out of buildings to look at them. Guests never have seen an animal this large up close."

"It's really important that we use the oxen because it keeps them in the public eye, and that helps preserve the breed," Tschopp said. "It's really satisfying for me to get people interested in these animals. I'm always hoping that a child will see the oxen, become intrigued, and help preserve them by getting involved in a 4-H program with them."

Smart as an Ox Slideshow