Animal labor—beast and human—was the only way to produce food in the age before machines. Colonial Williamsburg interpreter Ed Schultz drives the ox team while colleague Wayne Randolph guides the plow for a planting of corn. 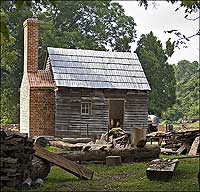 The kitchen is the first of the outbuildings at Great Hopes Plantation. 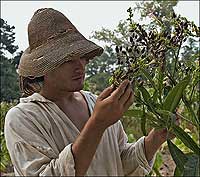 Dave Nielsen looks for worms in the seed head of a tobacco plant. 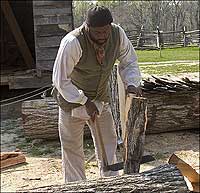 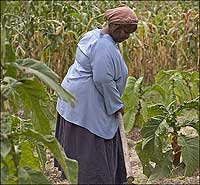 Emily James wields a hoe on a row of tobacco plants.

Master, mistress, child or slave, if you lived on a middling Virginia plantation in the eighteenth century, you had chores to do—and plenty of them. Wayne Randolph, agricultural specialist at Colonial Williamsburg, says, "The chief quality of life on a Virginia farm in the 1700s was work, work, and more work."

Work ebbed and flowed with the seasons, but it never stopped. From tending crops to butchering livestock to cooking, cleaning, or mending fences and tools, there always was something to be done.

Colonial Williamsburg guests can see and sample eighteenth-century farm life at Great Hopes Plantation, the museum's latest venture in historical interpretation. There, the willing volunteer can pitch in and hoe in a tobacco field, trundle a loaded wheelbarrow, or stack firewood.

A short walk from the Visitor Center, the site is designed to portray work and society on a middling plantation. It requires a diverse interpretive team to tell colonial agriculture's sometimes complicated story. The farming experts include Ed Schultz, rural trades supervisor; David Nielsen, agricultural interpreter; and Randolph. Because slave labor was an integral part of plantation life, members of the African American interpretive unit work here as well.

Great Hopes does not show life and work on the period's grand estates, like Carter's Grove or Berkeley. Those huge plantations had armies of laborers. Middling plantations were smaller and more numerous. They typically covered 200-800 acres and required a workforce of about nine adults. Despite their relatively small size, these farms offered their owners a bright economic future.

"These middling plantations were the path to wealth," Schultz says. "If you view the work that occurred on them simply as drudgery, then your view is off."

Also wrong is a perception of these planters as subsistence farmers. A middling planter could achieve a good life and a respected place in society. He could provide for his family and enjoy luxuries. Success, however, did not come easily. Middling planters were hard workers and hardheaded businessmen. They could read and write, and do arithmetic. They needed a sophisticated appreciation of market behavior and of calculated risk.

Thomas Jefferson admired these farmers for their skill, sobriety, industry, and contributions to their communities. He had them in mind when he wrote, "Those who labor in the earth are the chosen people of God." Middling planters were the workhorses of the community, Randolph says. They often served as constables, jurors, surveyors of roads, estate appraisers, and tobacco inspectors.

Farm women—wives and daughters of the planter—worked, as might be expected. Nielsen says, "They cooked and preserved food. They tended sizeable gardens." On the frontier, they produced clothes for everyone to wear.

The planter's slaves knew the farm only as a place of bondage and labor. They could not advance in society or amass a fortune. Many of them took pride in their work, despite that. The vastly different aspirations of master and slave, however, frequently led to tensions between the two, Schultz says.

Eighteenth-century farms had no machinery in the sense that we think of it. Laborers used simple hand tools. With them, eighteenth-century Virginians focused their greatest attention on three cash crops—tobacco, corn, and wheat.

Tobacco, grown for export, was the king of Virginia's rural economy. It had been since the 1600s. In the early 1770s, annual shipments amounted to seventy million pounds. Tobacco was labor intensive. Its growth and processing cycle lasted roughly from February to early spring. Corn and wheat tended to require short but intensive work during critical times in the growth and processing cycle.

Besides cultivating cash crops, farmers grew peas, beans, oats, potatoes, turnips, pumpkins, cabbages, carrots, melons, and other fruits like apples and peaches. They also raised cattle, swine, sheep, and poultry. These foodstuffs were consumed on the farm, although some surplus might be sold locally or exported.

Colonial Williamsburg guests can see interpreters cultivating some of these plants using eighteenth-century techniques, and Historic Trades carpenters using eighteenth-century tools and techniques to raise buildings typical of a middling plantation. Already up are a kitchen and slave quarters. To come are a master's home, a smokehouse, a corn house for storage, and a tobacco house for curing. 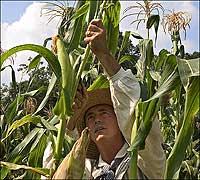 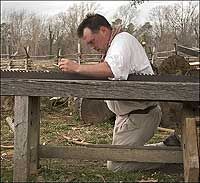 Carpenter Will Gore sharpens a pit saw for cutting timber into lumber. 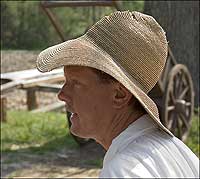 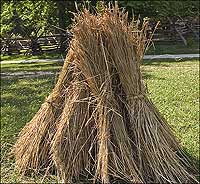 Wheat sheaves are set out to dry in the sun before being stacked.

Randolph refers to farming as "an ancient dance between man and nature." He says he likes the out-of-doors, and the nurturing qualities the dance requires.

Nielsen says, "I love farm labor for the endurance it creates in the laborer. I enjoy working with tobacco, because the plant requires perfect care, and its socially suspect nature rarely fails to find an emotion in our guests."

For Schultz, historical farming has a clarity of purpose not always found in twenty-first-century work. "I like the directness of this life," he says. "Its very simple and straightforward. It's not abstract. And every day you can see the results."