A Feast for the Eyes and the Palate 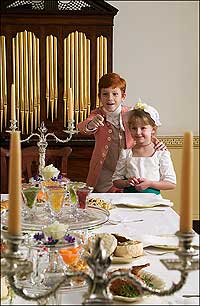 The children of John Murray, Governor Dunmore, eye the sweet things awaiting holiday guests at the Palace in Williamsburg. Lydia Dean is Lady Susan Murray, and Michael Shield is the Honorable Alexander Murray.

Dessert cake sits on the table in the Peyton Randolph dining room. 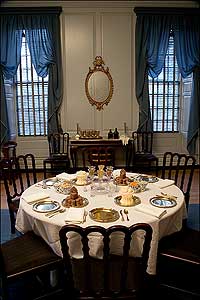 Ice creams and small cakes—cookies—on the table in the Palace dining room. 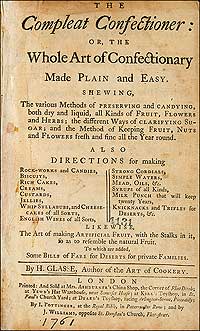 "Milk Punch that will keep twenty years" was one of Hannah Glasse's recipes. 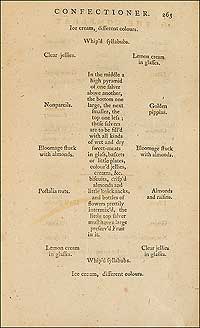 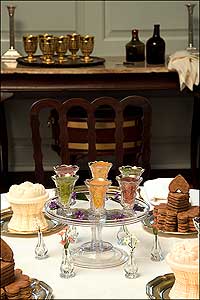 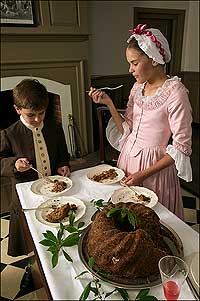 A trio of them anchor the holiday table at the Palace.

A colonial Christmas celebration focused on food. For Virginia's landed gentry, that meant a lavish presentation of meats, game, fowl, and preserved fruits and vegetables crowding the dining table alongside preparations of fish and seafood taken from Tidewater rivers and the Chesapeake Bay. There were baked goods too, large cakes and small cakes—called cookies today—and a variety of sweetmeats, a term that encompassed jellies, candied fruits and nuts, marzipan, and other sugary delicacies.

The main meal was served in the mid afternoon on an elaborately arranged table dressed with a fine white linen or damask cloth. At an important dinner like Christmas, two courses of desserts would usually follow two courses of meat and vegetables, the main visual difference being the absence of a table cloth for the dessert couses. Between courses, guests retired to another room while servants or slaves cleared the table and set it again. At a Chrismas ball, guest would be treated to an evening "dessert table," a feast for the eyes as well as the palate. Obsessed with symmetry in architecture, garden, and decorative arts, colonial Virginians were no less mindful of their tabletop design—each dish of food was precisely balanced with a similarly sized dish on the opposite side of the table.

THE DESSERT PYRAMID, a decorating staple since the seventeenth century, could be found in one form or another on most colonial tables in the better sort of houses. A careful stacking of fresh fruits, small cakes, or sweetmeats into the shape of a cone or pyramid, this table decoration was meant to be consumed. Larger fruits like apples or pears could be balanced on top of one another, perhaps with a little sugar icing or a couple of plates of graduated sizes inserted between layers to keep them from tumbling off the table. Smaller fruits like berries or cherries could be poured into a tin mold shaped like a cone or pyramid, where they were cemented with icing before being turned upside down onto a serving dish and topped with sprigs of greenery. The custom of the dessert pyramid originated in Europe, where it was standard banquet fare, gracing tables in castles and palaces from the German states to the French court at Versailles.

The hostess's reputation—indeed, the entire family's social standing—rose or fell according to the number of elaborate dishes on the table. Twenty or thirty was not considered excessive for a single course. To make matters even more challenging, custom required the number of dishes to remain constant throughout the meal. Elizabeth Raffald, the "Miss Manners" of her day, minced no words in her household guide: "As many dishes as you have in one course, so many baskets or plates your dessert must have." It was an era of conspicuous consumption, when quality meant quantity and presentation mattered more than taste. In his 1726 Cooks and Confectioners Dictionary, cookbook author John Nott told hostesses to aspire to perfect symmetry in design and color. Make sure, he said, that the pyramids were "erected of an exact Proportion: So that the same Sorts of Comfits, and the same Colours may appear on every Side at the opposite Angles."

A third sort of dessert pyramid appeared on American tables about the middle of the eighteenth century. This centerpiece was built of stacked salvers—flat serving plates raised on a pedestal, usually made of glass in graduated sizes—and loaded with sweetmeats. English author Hannah Glasse describes an example in her popular 1760s recipe book, The Compleat Confectioner:

In the middle a high pyramid of one salver above another, the bottom one large, the next smaller, the top one less; these salvers are to be fill'd with all kinds of wet and dry sweet-meats in glass, baskets or little plates, colour'd jellies, creams, &c. biscuits, crisp'd almonds and little knickknacks, and bottles of flowers prettily intermix'd, the little top salver must have a large preserv'd Fruit in it.

THE FASHION FOR DESSERT pyramids in England and America faded somewhat during the nineteenth century but never disappeared. An illustration of a confectioner's shop in The Young Tradesman; or, Book of English Trades, published in 1839, depicts a professional confectioner making a fruit pyramid for his customer. Dr. James Rush of Philadelphia, son of the Dr. Benjamin Rush who signed the Declaration of Independence, welcomed guests to his new home in 1850 with a table decorated with fruit pyramids. In her Civil War memoirs, Constance Cary Harrison, wife of President Jefferson Davis's secretary, recalled a Richmond dinner at which there were "many little iced cakes and rosy apples in pyramids."

American domestic diva Catharine Beecher, a writer no less renowned in her day than her sister Harriet Beecher Stowe, author of Uncle Tom's Cabin, gave a new twist to the sweetmeat pyramid in her Domestic Receipt-Book of 1854. In Martha Stewart fashion, she described an ornamental pyramid made with a cone of stiff paper, buttered, and covered with a boiled sugar paste.

Set it on a table, and begin at the bottom, and stick on to this frame, with the sugar, a row of macaroons, kisses, or other ornamental articles, and continue till the whole is covered. When cold, draw out the pasteboard form, and set the pyramid in the centre of the table with a small bit of wax candle burning with it, and it looks very beautifully.

By "kisses" she meant dollops of meringue. The candlelight from inside the pyramid would have glowed through the sugar icing.

The Englishwoman who wrote the classic Book of Household Management in 1861 illustrated her dessert instructions with pictures of fruit pyramids on a "tazza or dish with stem," which is "now the favourite shape for dessert dishes." Young Isabella Beeton's book sold two million copies during the next few years, and after her death at twenty-nine, the publisher revised and reprinted it until the middle of the twentieth century. No English Victorian homemaker was without her "Mrs. Beeton's" to guide her in the management of her servants, her children, and her kitchen. Beeton's leave-nothing-to-chance approach to food preparation described how to prepare a strawberry pyramid:

Put in rows pyramidically, with the stalks downwards...The fruit should be gathered with rather long stalks, as there is then something to support it . . . the finest to crown the top.

As late as the 1923 edition, fruit pyramids are still in style.

The fruit looks best when arranged a little from the edge of the stand and piled pyramidically . . . red and white currants may be mixed with good effect: they should be piled in alternate layers to form a pyramid.

A FEW YEARS AFTER Beeton's 1923 edition appeared, John D. Rockefeller Jr. began Williamsburg's restoration. To furnish the 1700s buildings with correct and appropriate antiques and reproductions, historians set out to learn everything they could about the eighteenth-century Virginia lifestyle. When the decision was made to limit modern decorations at Christmastime, historians sought out authentic colonial-era methods to decorate Williamsburg's dining room tables.

Fruit pyramids were then, and are still, the most popular of Williamsburg table decorations. Because they were used most often during the holiday season, when the town bulged with visitors, they came to be associated with Christmas when, in the eighteenth century, stacked fruit pyramids were a year-round feature subject only to the availability of fruit. To make the pyramids sturdier and the arranger's job easier, a Colonial Williamsburg carpenter pounded nails into a conical shaped block of wood. No longer would the slam of a door or the accidental bump against the table send apples or lemons bouncing to the floor.

So many visitors asked about the wooden form that Colonial Williamsburg began passing out directions for fixing finishing nails into a tapered block of wood. Nevertheless, many people, it seems, were unable or unwilling to make their own at home and requests for the finished product continued unabated. In 1956, Colonial Williamsburg began reproducing the forms in two sizes and selling them at its Craft House. Since then, more than 50,000 have been sold.

Although many kinds of fruit can be used to make a festive pyramid, the wooden forms have come to be known as "apple cones." The red and green apples do bring those favorite Christmas colors to the table or mantel. With these nail-studded cones, today's decorators can easily create fruit pyramids worthy of a Christmas dessert table at a royal governor's banquet.

A Feast for the Eyes