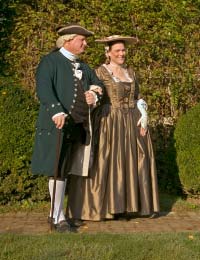 Charles Redd and Carolyn Wilson as Peyton and Betty Randolph. The Randolph brothers split between patriot and loyalist sides.

Editor’s note:
An installment in a series of first-person, question-and-answer interviews with historic figures interpreted in Colonial Williamsburg’s Historic Area.

The American Revolution tore apart families, among them the Randolphs of Williamsburg. Tory John Randolph took his family to England. His rebel brother, Peyton Randolph, stayed in Virginia. The separation probably was painful for their wives. Carolyn Wilson portrays Peyton’s wife, Betty Randolph, in the Historic Area. Speaking as Betty might, Wilson discusses her brother-in-law’s decision in summer 1775 to leave America and its impact on her family. Wilson also reveals how far apart the brothers stood on the major issues of the day. Her observations reveal the difficulty of decisions the cause of independence presented principled people. Wilson’s comments have been condensed and edited.

Mrs. Randolph, you seem upset.
I am indeed upset, sir. I just learned that my husband’s brother, John, is preparing to take his wife, Ariana, and their two daughters to England. His support for King George III has made it unsafe for them to remain here. Politics have wrecked our lives. So they are leaving Tazewell Hall, their home here in Williamsburg, and they are leaving us. This is a tragedy. Ariana and her children are my family. She is closer to me than any sister I have. I have played with her children and walked with them many times on the path between our homes. They are like my own, if I had ever had any. When I reflect on happier times at parties, meals, and other gatherings, it only deepens my sadness.

Might your brother-in-law change his mind?
No. He fiercely supports King George III. John also is extremely close to Lord Dunmore, Virginia’s royal governor. John is bright and well educated. He attended the College of William and Mary, and studied law at the Middle Temple at the Inns of Court in London. Yet, for all his intellect, John simply cannot see why others would feel differently on this matter than he does.

Have his views affected your husband?
Understand, please, that John’s views have affected his relationships with everyone in Williamsburg, even—and perhaps especially—his brother, Peyton. Though my husband loves and respects his brother, their political viewpoints are so different that they can barely speak. I cannot express fully how painful it is to watch the two of them. We have tried to keep things pleasant, but it has been very difficult.

Your husband is equally firm in his views?
He is. His concern about our rights is long-standing. You know he wrote to the king in 1764 to protest the Stamp Act. Peyton also served as chairman of the Virginia Committee of Correspondence, which worked to improve communications between the colonies. Last year, he served as president of the Continental Congress. The English consider him an enemy. We hear his name is on a list of American leaders subject to arrest and execution.

Has Williamsburg reacted to John’s decision?
I am mortified by their behavior. John’s life has been threatened. His property has been destroyed. His wife and daughters have been verbally abused. A poem in the newspaper called Ariana a rattlesnake. I cannot believe my neighbors have acted this way. I would have hoped that Williamsburg would exhibit the height of civilized behavior. John has a right to think what he wants. He has—I believe—a right to be wrong. Others should respect that.

You have not mentioned Ariana’s son, Edmund.
Edmund is one and twenty years old. He is a man and, therefore, has his own opinions. In this case, he supports the colonies. Ariana tells me that Edmund and his father fight about the subject constantly. Their arguments ruin every meal they take together. His parents are confused and upset by his views. They are irritated at Peyton for encouraging him. Ariana says Edmund is just a puppet of Patrick Henry, Richard Henry Lee, and Congress. Though I support Edmund’s position, Peyton and I also believe he must respect his father. Edmund is brave. I believe there is every possibility he might end up fighting against the British army. The thought of him being in danger bothers me greatly.

Will John, Ariana, and their daughters return?
No. Life here has changed. The supporters of the king are unsafe unless they go now to be with other loyalists. If the colonists win, they can never return. I fear that I will never see John or his family again. Never.