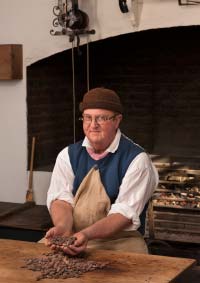 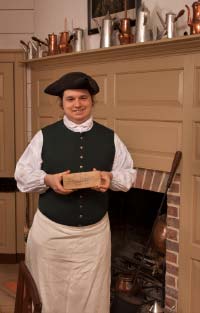 Alan Ramsey holds a pressed cake of chocolate wrapped in paper, a common form it was sold in the eighteenth century.

A Cup of Hot Chocolate, S’good for What Ails Ya

Conquistador Girolamo Benzoni, one of the first to taste the spicy Aztec beverage called cacahuatl, wrote, “It seemed more a drink for pigs than a drink for humanity. I was in this country for more than a year and never wanted to taste it, and whenever I passed a settlement, some Indian would offer me a drink of it and would be amazed when I would not accept, going away laughing. But then, as there was a shortage of wine. . . .”

Benzoni, a sojourner in Mexico, was forced to relent. The taste he found “somewhat bitter” and noted “it satisfies and refreshes the body but does not inebriate.”

Making cacahuatl was a tedious affair that involved roasting the cacao seeds—also called nuts or beans—to a precise degree of doneness, removing the shells, grinding them on stone to a paste, mixing that with other dried and ground ingredients like chili pepper, vanilla, flowers, and spices, dissolving the results in water, and pouring it from one vessel to another, back and forth, until it developed a foamy froth. The Aztecs drank it at room temperature.

Other Spaniards shared Benzoni’s opinion of the Aztec beverage but grasped its benefits: “He who drinks a cup of this liquid, no matter how far he walks, can go a whole day without eating anything else.” An “anonymous gentleman” in Hernando Cortes’s party proclaimed the nutritious liquid food “the healthiest thing.” The Spanish noted that the beverage stimulated the senses in general and, they believed, one sense in particular—it was widely considered an aphrodisiac. Still, they didn’t like the taste. But, sweetened, they served it hot with breakfast for its energy boost.

Of concern to Catholics was chocolate’s definition. Was it a food or a drink? This had serious religious implications: if it was a food, it could not be consumed on fast days. Theologians and popes debated the question for two hundred years.

Yes, one drank chocolate, but then again, so many foods could be added to it, including bread crumbs, eggs, and milk, that it functioned more like a food than a beverage. And there was no denying that the highly caloric drink alleviated hunger pangs. Complicating matters was its reputation as a sexual stimulant, something that seemed doubly sinful on a holy day. In the end, those who judged it a beverage prevailed. Protestants and Jews did not share the Catholics’ concerns.

The first recorded instance of chocolate in Spain came in 1544 when a gift of cacao seeds was presented to King Philip II. The steady stream of priests, soldiers, and aristocrats back and forth across the Atlantic for the previous five decades makes it likely, however, that it reached Spain earlier than that. The Spanish kept the ingredients to themselves for almost a century, but calling chocolate a closely guarded secret, as many sources do, seems overly dramatic.

Initially, all the chocolate was consumed by the Spanish aristocracy, not re-exported, so few people outside Spain and Portugal came into contact with it. As supplies of sugar and cacao increased, chocolate drinking spread gradually throughout the courts of Europe and became the preferred beverage of the rich and royal.

Only the rich and royal could afford it. The drink was time-consuming to make, and its exotic ingredients—cacao, sugar, and spices—had to be imported from faraway continents. All were labor-intensive crops that required large plantations with many slaves. Increased demand spurred the Spanish to spread cultivation of the "chocolate nut tree" throughout their ballooning empire, from the West Indies to the Philippines.

Chocolate drinking got a boost in 1660 when the Spanish Infanta Maria Teresa married the Sun King, Louis XIV. At the time of her arrival, chocolate was frowned upon at the French court, although evidence shows certain aristocrats—among them Cardinal Richelieu’s brother and Cardinal Mazarin—drinking it in the 1650s for their health. The queen and her ladies-in-waiting indulged in private until the wind changed. By the 1680s, everyone who was anyone in European royal circles drank the frothy hot beverage.

The first Englishmen to encounter chocolate were pirates, or, more politely, privateers, commissioned by the English monarch to prey on Spanish vessels. They didn’t know what it was at first. On at least one occasion in the 1500s, English privateers burned a shipload of valuable cacao seeds, having no idea what the ugly little brown things were worth. Chocolate reached England in the middle of the seventeenth century, just as two other exotic beverages—coffee and tea—were making their debut.

It was no coincidence that these beverages were all consumed hot and sweet. “Hot melts sugar,” says Jim Gay. He’s Colonial Williamsburg’s Historic Foodways journeyman cook and an authority on the history and manufacture of chocolate. “All these beverages were sweetened with cane sugar. The British didn’t start growing sugar on Barbados until the 1640s. First comes sugar, then comes chocolate and coffee and tea . . . all of them introduced to the British in the late 1640s.”

The first known English recipe for chocolate called for sugar, long red pepper, cloves, aniseed, almonds, nuts, orange flower water, and, of course, cacao. “The hotter it is drunke, the better it is,” said the recipe’s author in 1652. Unaware of the Aztec custom of drinking it cool, the recipe said that “being cold it may doe harm.”

Chocolate was usually sold ground and pressed into cakes wrapped in paper. In England, the cakes were small, two or four ounces, because of the high cost of the product. In America where it was cheaper, the one-pound size was more common. By the start of the eighteenth century, the British were drinking chocolate with water and brandy, with milk, and with port or sherry. All three versions used sugar and spices and were frothed with a chocolate mill, or molinillo in Spanish, rubbed briskly between the palms. “You may likewise put in a slice of white bread or bisquet and eat that with the choc,” said the recipe. Other embellishments included lemon peel, eggs, musk, and ambergris.

Once it snatched Jamaica from the Spanish in 1655, England had its own island with flourishing cacao plantations. Chocolate became widely available, although still expensive. Making it more so were the import duties levied on all chocolate brought into England. In the Atlantic colonies, however, the duties were lower, putting the cost of the beverage within reach of more pocketbooks. Perhaps that explains why, at the time of the Revolutionary War, there was one commercial chocolate maker in Britain and nearly seventy in the thirteen colonies.

Some historians think that chocolate drinking spread from England to its North American colonies, but it seems more likely that it came directly in ships that plied the trade routes from the West Indies to the major colonial ports of Boston, Philadelphia, New York, and Newport, Rhode Island. Whatever the route, chocolate arrived in English North America at about the same time it arrived in England. It was available as chocolate nuts, as shells, and in processed “chocolate cakes,” lumps of grated powder and sugar ready to be stirred into boiling water, mixed with whatever ingredients one preferred, and frothed with the little hand mill.

Those who bought the cacao seed had to roast and grind the chocolate themselves or, more likely, have their servants or slaves do the tedious job. Those who, like Martha Washington, purchased the cacao shells, steeped them in hot water to make a thin chocolaty drink that was easier on the stomach than oily chocolate.

According to Gay, most chocolate was processed in the northern colonies, in New England, Philadelphia, and New York. It was sold in its various forms in general stores and grocers’ shops. In pre-Revolutionary Williamsburg, unsweetened chocolate went for about two shillings sixpence per pound, slightly more than a free unskilled laborer or sailor earned in a day. Obviously, few of those men drank chocolate. Prices fell, however, and by the nineteenth century, it had become cheap enough to be given to slaves.

Its perceived medicinal value made chocolate a natural product for apothecary shops. It was considered nourishing for the sick as well as an aid to digestion and was believed to promote longevity, help lung ailments, energize the body, cure hangovers, suppress coughs, and, as mentioned, stimulate the libido. For that reason, the Virginia Almanac of 1770 cautioned women against it, warning “the fair sex to be in a particular manner careful how they meddle with romances, chocolate, novels, and the like,” especially in the spring, as those were all “inflamers” and “very dangerous.”

“This was very much ignored,” Gay says. “Women were the main consumers of chocolate. Children were denied chocolate because it was a stimulant.” But it was this sexy reputation that caused chocolate to become associated with love, Valentine’s Day, sinful pleasures, and decadence.

Ben Franklin recommended chocolate as a cure for smallpox in Poor Richard’s Almanac of 1761; Doctor Benjamin Rush did the same in his medical texts. Thomas Jefferson thought chocolate would overtake tea and coffee as the American beverage of choice. In a letter of November 27, 1785, to John Adams he wrote, “The superiority of chocolate, both for health and nourishment, will soon give it the preference over tea and coffee in America which it has in Spain.” In this he was mistaken. Chocolate drinking would soon decline in favor of chocolate eating.

By the late eighteenth century, a very few, very wealthy Americans were eating chocolate as food. Not the creamy sort of milk chocolate candy bars we know today—those would not exist until the nineteenth century—this rather gritty chocolate was shaved and cooked into puddings, pies, and tarts and served as a side dish at dinner. It was also mixed into creams and ice creams and almond-shaped candies and served at the finest tables as part of the dessert course.

North America’s first cookbook, printed in 1742 in Williamsburg by William Parks, publisher of the Virginia Gazette, contained but one chocolate recipe: “chocolate almonds.” The list of ingredients included no almonds; the word merely reflected the shape of the chocolate, which was mixed with sugar, orange flower water, and a binder. Today we might call it a chocolate drop.

Gay’s research turned up other Virginia chocolate recipes in manuscript form, sometimes written by an unknown housewife. One of these mixes sugar, chocolate, and almonds, then directs the cook to use cochineal to color them red, saffron for yellow, “Stone blew” for blue, and “the Juice of Spinage” for green. Gay calls this “the eighteenth-century ancestor of M&Ms.”

Chocolate did not really become a food until the middle of the nineteenth century. The pivotal date was 1828, when a Dutchman, Casparus Van Houten, invented a machine for manufacturing powdered low-fat cocoa. Chocolate beverages became easier and cheaper to make, leading to what some have called the democratization of chocolate.

In 1847, an English chocolate maker that had been in business almost a hundred years, J. S. Fry and Sons, developed the first molded chocolate bar. A Swiss, Henri Nestlé, figured out in 1867 how to make powdered milk by evaporation, and another Swiss, Daniel Peter, came up with the idea of blending Nestlé’s powdered milk with chocolate in 1879. The milk chocolate candy bar was on its way.

The cocoa fruit, or pod, comes from central and South America and holds the seeds that will provide drinking or cooking chocolate.

The cocoa seeds, or beans, are ready for the next production step.

Frank Clark removes the shells and debris from the cocoa seeds. 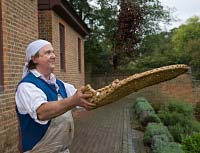 Jim Gay uses a winnowing basket to free the seeds from the chaff.

Pounding of the cocoa seeds produces fine particles that provide the chocolate aroma and flavor.

Chocolate particles are ground with a roller on the heated stone to produce the chocolate “butter.” Sugar may be added to sweeten the taste.