Mortality marked the record of Jamestown’s early years. Graves swallowed the condemned, the starved and the sick. 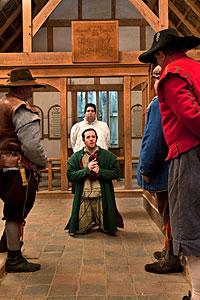 Begging forgiveness in the church at Jamestown Settlement

Upon Paine of Death

The Lawes Divine, Morall and Martiall

In Virginia’s “new found land,” this demi-Eden, into which the seventeenth-century English landed, picking the flowers in one’s neighbor’s garden could be punished by death. That was Article 31 in the Lawes Divine, Morall and Martiall, written and established by the colony’s Lieutenant General Sir Thomas Gates in the spring of 1610. More followed when Lord Delaware arrived and became governor a few weeks later, all carefully transcribed by the colony’s secretary, William Strachey.

Much has been written about the prevalence of the death penalty as the price for relatively minor infractions in this era. In truth, its purpose was to frighten would-be transgressors into behavior unlikely to cause conflict between private individuals or government. The intent was to shape the colony into a family of docile, law-abiding citizens.

That was more easily ordered than accomplished. The first colonists were not a well-disciplined lot; indeed, they were seeking either profit or degrees of freedom denied them in their mother country. Half the first arrivals were classed as gentlemen, or “Persons of Quality,” and the rest as “the other sort.” The need for law and order applied to both, though the avoidance of it differed not one whit from common transgressions in England. Gentlemen committed crimes from behind a screen of education and superiority, while the others exercised venal instincts as old as mankind.

The first set of Virginia Company of London instructions to the leadership it sent to the colony was written in April 1606, well before the ships sailed. This, the First Charter, signed by James I, was primarily concerned with geographic locations for planting two footholds, one in Virginia to be named the Firste Colonie and the other the Seconde Colonie in New England. Specifics of the rights of the colonists were vague but reassuring. All the king’s subjects were to “enjoy all the liberties, franchises and immunities … as if they had been abiding and borne within this our realme of England.” The established common law of England would remain the yardstick employed in America.

Needless to say, the lawyers and politicians who framed the First Charter had not the slightest idea of what the settlers would find or need when they reached Virginia. They were content to export the status quo in the assumption that something more definitive could be written later. In the autumn of the year, however, the king’s lawyers got more specific. In November, again in his name, they created a set of Articles, Instructions, and Orders to help his Majesty’s “loving people” properly conduct themselves and be advised by a blue ribbon, stay-at-home council of twenty-three knights, two lawyers, and one doctor of divinity.

In the space of three years, the Virginia Company received three charters, but it was the sets of instruction given to each successive governor that addressed specific potential problems. In essence, all three charters gave the governor the authority to do as he thought best. If he said do it, you did. Arguing with him was thought nigh unto treason and placed one in “paine of death.” The use of the word “paine” suggests a possible mitigation, but in the seventeenth century it meant punishment by death with no ifs or buts. The instructions, however, did not define the method of execution. That was up to the governor. Article 16 in the instructions of 1611 made it clear that “the life of souldier, or a laborer, belongs to none to take away, but to the Lord Generall” or his deputies.

Stranded by a hurricane in Bermuda as he made his way to Virginia in 1609, Governor Sir Thomas Gates was faced with a mutiny that carried with it the pain of death. Two men were sentenced, one pleading for forgiveness and pardoned, the other condemned to be hanged. But being a gentleman, he asked to be shot. His request was granted, and he was dead before the day was done. By coincidence, his name was Henry Paine.

In Virginia, too, when sentence was passed, the penalty was swiftly paid. There were no postponements or appeals. With the criminal condemned, it was best to brook no delays that could lead to more disorder in the colony. Besides, there was no well-guarded penitentiary to house either condemned or lesser malefactors. Consequently, long-term prison sentences were not included in the governor’s instructions. The penalty for most paltry offences was public whipping that could continue for “four and twenty hours,” or be repeated across days and even weeks. The perpetrators of more serious infractions could find themselves “committed to the gallies” for six months or as much as three years. In reality, the fledgling Virginia colony had no oared galleys and so had no means of imposing that punishment.

Military punishments were more readily inflicted and commonly related to the illegal use of weapons. Thus Article 22 stated that “Hee that draweth his sword upon the Court of Guard, shall suffer death by the Armes which he weareth,” while any soldier who should draw his sword in a town or camp “shall lose his right hand,” the presumption being that men with swords were right-handed. That punishment was somewhat self-defeating, however, for a one-handed soldier was not worth his bread.

Openly cursing an officer called for a punishment known as “passing the pikes,” whereby the intemperate soldier was forced to run between ranks of his fellows, who whipped him and slashed at him as he passed. We may assume that the severity of both depended upon whether the man was liked by his comrades.

At all times a colonist had to be careful of what he said to whom. Any use of “disgraceful words” risked the punishment of being tied head and feet together in the guardhouse for the space of a month. Saying something uncomplimentary about God—taking His name in vain—would earn an unspecified “severe punishment” the first time, a bodkin through one’s tongue for the second, and a third would be one’s last.

God played a much greater role when everyone was required to be a believer, and those who failed to loudly and clearly say so could have one leg in the grave. It fell to the preacher, therefore, to be God’s messenger. Article 6 called on everyone from governor to goat herder to repair to the church to hear divine service and listen to the preacher read the entire document of Lawes Divine, Morall and Martiall just to be sure that no one could claim to be unfamiliar with the articles—all fifty-one of them. Anyone who failed to hold the preacher in high regard could expect to be thrice whipped. These and other imposed penalties were read out in front of the congregation, and minor miscreants were required to beg forgiveness on their knees in front of all their fellows.

The notion that most punishments should be imposed in public was very much a part of the procedure and was a warning to others to resist temptation. In Virginia, where the population was very small, it probably had the desired effect, but in England, public executions had already become a spectator sport.

The standard words of condemnation uttered by the judge were so graphic that they would make a modern jury cringe. Richard Langhorn, a Catholic lawyer accused of complicity in the Popish Plot, heard them in 1678:

That you be conveyed from hence to the place from whence you came, and from thence you be drawn to the place of execution, upon a hurdle; That you there be severely hanged by the neck; that you be cut down alive; that your privy member be cut off; that your bowels be taken out and burned in your view; that your head be severed from your body; that your body be divided into four quarters, and your quarters be at the king’s dispose. And the God of infinite mercy be merciful to your soul.

And the crowd applauded, neither knowing nor caring that Langhorn was innocent. In Virginia in the previous year, participants in Bacon’s Rebellion met a comparable fate, and the probable evidence of it would be found by archaeologists in a Jamestown well.

Regardless of such penalties as were actually exacted under Governor Gates, in 1610 the newly arrived Governor for Life, Lord Delaware, found the surviving colonists in something less than parade order. As he brought with him a small army of soldiers, the new administration was equipped to wield a bigger stick and had no need for carrots. Illness, however, forced Delaware to leave, to be replaced by Sir Thomas Dale, who arrived in May 1611. What he found was not encouraging, the colonists lazy and undisciplined, and “at their usuall works bowling in the streets.”

When Dale reissued the Lawes Divine etc., some colonists deserted and went to live with the Indians, who were becoming more aggressive as the colony weakened. When some of the absentees were caught, Dale made a public example of them, and colonist George Percy allowed that they were executed in “a most severe mannor.” He described the methods:

“Some he appointed to be hanged, some burned, some broken upon wheles, others to be staked and some to be shott to death.” Hungry men who robbed the store were tied to trees and left to starve to death. All this Dale ordered “To Terrefy the reste for Attempteinge the Lyke.” Breaking on the wheel had medieval origins and involved stretching the criminal on a wheel and tying his arms and legs to the spokes. The wheel was then slowly turned while the executioner broke the victim’s bones with an iron bar.

In the reign of Catholic Queen Mary, from 1553 to 1558, clergymen whose views were considered inimical could expect to be burned at the stake, and burning was still an option in the mind of Lord Delaware, who was prepared to burn the queen of the Paspehegh Indians. It says much for the humanity of colonist Percy, who said that “to Burne her I did not howlde itt fitteinge.”

Barbarous though such forms of punishment may be to us today, in the seventeenth century they were accepted hazards of life. The colonists of seventeenth-century Virginia had a while to wait before humanity trumped the Lawes Divine, Morall and Martiall.

Even relatively minor miscreants could expect to be branded on their cheeks or have their noses slit, or their ears cut off or nailed to the pillory—a device whose use was not abandoned until 1837. In England the last to be pressed to death died in 1828, and the last women to be publicly whipped suffered its pain and humiliation in 1831.

By November 1794, however, one John Stedman could write in his journal that

Our civil laws are altered for the better of late. No malefactors to be crushed to death for want of pleading, and no more women to be burnt for coining as formerly, but to be hanged as men. This certainly is an amendment.

Williamsburg’s Ivor Noël Hume contributed to the spring 2010 journal a story about a rapid-loading Revolutionary War rifle. The University of Virginia Press last autumn published his autobiography, A Passion for the Past: The Odyssey of a Transatlantic Archaeologist. ISBN: 978-0-8139-2977-4, hardcover $29.95.

Jamestown-Yorktown Foundation interpreters in the church at Jamestown