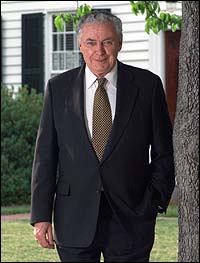 These are uncertain days. Our nation, our world, is beset with worries of war, terrorism, rising unemployment, falling markets, rampant poverty and disease. Our troops are mobilized far from home. Old allies squabble. Old enemies grow bold. It is hard to know where to look for hope for our future. Unless it is to our past.

America's history is a chronicle of adversities overcome, of problems solved, and of applying the lessons of the past to the difficulties of the present. The times that tried men's souls, in Tom Paine's phrase, were the times from which we emerged the last, best hope of earth, to borrow the bittersweet utterance of Abraham Lincoln.

To meet the tests of his time, Lincoln turned for inspiration, example, and analogy to America's precarious creation. That's why the Gettysburg Address opens with a reference to the Declaration of Independence.

As our "new nation, conceived in liberty and dedicated to the proposition that all men are created equal" entered its darkest passage, Lincoln said, "Fellow-citizens, we cannot escape history. . . . The fiery trial through which we pass, will light us down, in honor or dishonor, to the latest generation."

That "fiery trial" proved the nation's resolve, and its steadfastness. That trial showed our determination to bind up our wounds and to continue the great American experiment in democracy. Those are among the qualities that fourscore and seven years before helped transform thirteen struggling colonies into what became the most powerful, most prosperous, and most just nation in the world.

The situation of our nation today surely is dangerous and troubling, but its history instructs us neither to falter nor to despair. To be sure, America's is not a perfect past, but it is a past fashioned from principles, among them freedom, peace, resolve, and reason. Principles upon which we always have, and always may, depend.

Thomas Jefferson said: "We are alarmed here with the apprehensions of war, and sincerely anxious that it may be avoided; but not at the expense either of our faith or honor." Jefferson also said, "We . . . owe it to mankind, as well as ourselves, to restrain wrong by resistance, and to defeat those calculations of which justice is not the basis." And he said: "Continue to go straight forward, pursuing always that which is right, as the only clue which can lead us out of the labyrinth."

The past, like the present, was a maze of danger, trouble, and doubt. Colonist and Native American, black and white, slave and free, the men and women of the past struggled to find the way to liberty, tranquility, and prosperity. They bequeathed to us the idea of America, an idea for all people, for all time. They made our nation the hope of the planet. In these uncertain days we are confident of one thing at least: that the future may learn from the past.