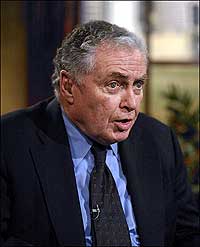 Colonial Williamsburg is a remarkably thorough restoration of an eighteenth-century British-American city. That in itself is a signal accomplishment. But it is more. It is a place where our guests may wander among the dwellings and down the streets of a colonial English community revived and alive with the people of the past. Yet, for all of its 301 beautiful and historic acres and its enormously able interpretive staff, Colonial Williamsburg is about something larger than the re-creation of an antique village of periwigged Englishmen, enslaved workers, and talented tradesmen. Much larger. It is about how we became Americans.

Those values not only are important to all Americans in terms of the quality of our lives; they also are crucial to the well-being of our country. That's why it is so vital that all of our citizens understand those values that underpin our republic and accept them as their own. Knowing why they were first articulated, why they are central to the American experiment, and how they have evolved as the nation has developed, adapted, and prospered, contributes immeasurably to that understanding and acceptance.

The times we live in, the convulsive world situations in particular, put enormous pressure on and make enormous demands of our democratic system. When sacrifice is called for, it is critical that we all understand what's at stake, why we may be asked to forgo our self-interest for the greater good. These are times to focus on first principles. Where better to do that than at Colonial Williamsburg? What place offers a richer contribution to our understanding of who we are as a people, as a nation?

Colonial Williamsburg's programs, on-site and in classrooms across the country, reflect our commitment to helping ensure that the first principles debated and fought for here are understood, that their relevance to our current condition is fully appreciated, and that they are never neglected or taken for granted. It is the idea of America, nourished by those first principles, that has guided and sustained us as a nation since those early days in Williamsburg. It is an idea for all people, for all time.