Lighting and its Effects on Virginia's Tradesmen

Last night after I had put out the Candle and gone
to bed I was obliged to get up again and put
on my Cloaths and sit up all night by reason of a
snake having got under my Pillow, which made me
afraid I having no light to clear the bed of him.

The predicament of John Harrow, an indentured servant making a long black passage through a sleepless night in 1770s Virginia, throws a light on the life of those days. Without a candle, you made do with the dark. Then, as now, the availability, and the nature, of illumination determined the rhythms of the day—particularly the workday. But in the eighteenth century it took more than a flip of the switch to brighten a room, which is why colonial people thought about light in a manner we do not. Then, the availability of light controlled man; today, man controls the availability of light.

Artificial or natural, eighteenth-century light was limited. When that limit was passed, you waited for the sun to rise again, or supplied yourself with the best flame you could, minding the expense. The limits of light figured not only in the domestic chamber but in the farm fields and the calculations of business; if a man couldn’t see, a man couldn’t work. Part of a tradesman’s job was to mind the differences between natural and artificial light and try to take advantage of both. Whether to supplement the sun with a flame meant deciding whether the work was worth the candle and something as simple as working by daylight still required forethought. 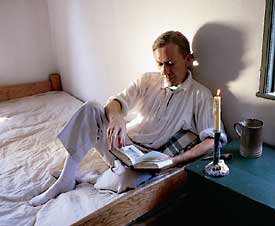 Interpreter Richard Frazier reads by the light of a bedchamber candle as evening falls.-- Dave Doody

One consideration was how much sunlight reached the workbench. Joseph Moxon, who in 1683 wrote the first book in English on the art of printing, said a printer should take care that the workroom has “a clear, free and pretty lofty Light, not impeded with the shadow of other Houses, or with Trees.”

Buildings needed to face straight in the direction of the compass that best exposed the windows to the sun. In general, that meant structures aligned north and south with plenty of windows on the east and west.

Indirect sunlight was also important. Dormer windows were more than architectural adornments. Not only did they allow light to enter a pitched roof, the dormers’ interior sides helped reflect and amplify it.

William Pain’s Builder’s Companion and Workman’s General Assistant, published in 1765, gives a method to ascertain the amount of window surface necessary to produce “proper Light for the Room, and not glare too much, nor be too dark.” Pain says: “The Proportion of Windows for light to Rooms, multiply the length of the Room by the breadth, and multiply the Height by the product of the Length and Breadth, and out of that Product extract the Square Root, which is the Light required.”

Tradesmen, however, rarely had the opportunity to design their workspace from the ground up. They were often tenants who could not afford to build their own shops and had to adapt their workspace as best they could.

One of the simplest and most durable ways of improving illumination in a room was to paint it a light color. Dark walls reduce light in a room by absorbing it instead of reflecting it. Light colored walls allowed the conservation of what illumination occurred naturally before resorting to the expense of artificial illumination.

The way a room was arranged could also allow more efficient use of light. In almost all surviving eighteenth-century prints, work occurs directly under windows. Activities that required little

light usually are performed away from windows, it being easier to move your work to the light than the light to the work.

Occupations that required close attention to detail, like copper engraving in the production of illustrations, demanded a maximum amount of light at all times. Brightness was crucial. The only way to judge the quality of an engraving before printing was to view the reflection of the surface. Direct sun was too brilliant to use on clear days, and cloudy days could not provide light that was consistent.

Diffused light was best for this work, and the use of oiled paper screens over windows was common. They spread the light evenly and reduced the glare on the engraved surface making small details more apparent. Oil lamps were used also, with smaller screens between the flame and the copper plate.

Just as there were occupations that demanded steady and therefore artificial light, there were trades that used sunlight exclusively. Men making gunpowder or fireworks, for instance, could not risk an open flame. In the face of limited competition, some colonial tradesmen may have been less inclined to suffer the dim, drear, and dear artificial light of expensive candles if they did not have to and to wait instead for the sun.

Shops that depended on natural light had to figure on the ratio of day to night changing a little as seasons progressed. Because June days in Virginia have almost half again as many hours of daylight as December days, a job that took two winter days to complete would probably require a day and a half in the summer. Artisans adjusted their schedules accordingly. In 1813 Thomas Jefferson made a chart in his farm book that recorded how the time of year affected spinning and weaving:

Estimate of what may be spun daily:

June’s daily production of wool was more than half again the amount in December—a direct correlation with daylight hours. Jefferson’s chart shows his spinners were active only when the sun was out. It seems he sought to harmonize their schedules with sun rather than extend their workday with artificial light. Others let the sun set their waking as well as their working hours. Gilbert White said in 1775 that people in Shelborne, England, “burn no candles in the long days, because they rise and go to bed by daylight.”

Weather, something less reliable than nightfall and sunrise, also conditioned sunlight. Unpredictable periods of insufficient daylight, especially when artificial light was too dim for the job, could ruin or delay a shop’s work.

When you could get it, the sun was usually the most desirable source of light. For some close-detail work, the sun had no equal for intensity and duration. Natural light was also free; artificial sources could be expensive. Yet they were sometimes indispensable.

Probate inventories and other documents suggest that when the sun failed them, colonial Virginians turned to candles more than any other source of artificial light. Candles weren’t much affected by season or weather, but they had the problem that Harrow pointed out: they had to be lit. Matches are a nineteenth-century development. In the eighteenth century, the nearest fireplace usually was the source of ignition. But fires weren’t always readily available, as James Boswell noticed one London summer night in 1763:

I determined to sit up all this night which I accordingly did and wrote a great deal. About two o’clock in the morning I inadvertently snuffed out my candle, and as my fire was long before that black and cold, I was in a great dilemma how to proceed. Down stairs did I softly and silently step to the kitchen. But, alas, there was as little fire there as upon the icy mountains of Greenland. I was now filled with gloomy ideas of the terrors of the night. I was also apprehensive that my landlord who always keeps a pair of loaded pistols by him, might fire at me as a thief. I went up to my room, sat quietly until I heard the watchman calling “past three o’clock.” I then called to him to knock at the door of the house where I lodged. He did so, and I opened to him and got my candle re-lumed without danger. 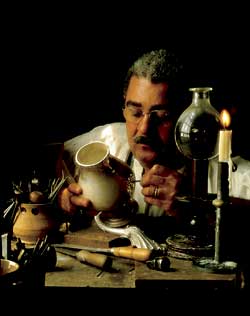 Today, almost all candles are made from paraffin, an oil developed in the early 1860s. Colonials had to choose between wax and tallow.
Tallow candles were by far the least expensive and most common. They were made of the fat of sheep and cows and could be manufactured at home or purchased. Tallow candles burned unevenly, smoked and stunk profusely, and sometimes melted in summer heat. They also required snuffing.

Today “snuff” means “extinguish,” but not in the eighteenth century. Benjamin Franklin bought a device in 1758 for his wife Debbie, that appears to have been what people today consider to be a “snuffer.” He said it was an “Extinguisher, of Steel . . . and is of new Contrivance to preserve the Snuff upon the Candle.” The “snuff” he meant was the charred end of the wick. An extinguisher, shaped conically, put out a candle. A snuffer, made like scissors, trimmed the wick while the flame burned.

The braiding of modern wicks, along with waxes of higher melting points, ensures wicks are consumed as they burn. Before such improvements, wicks had to be trimmed. Otherwise they drooped and folded against the edge of the candle, forming a spillway. The candle guttered; the molten-fat fuel ran down the side instead of being burned. As much as ninety-five percent of a tallow candle could run away if it was not regularly snuffed.

A snuffed candle did not go out but burned brighter, unless you snuffed too exuberantly and ended up, as Boswell did, “snuffing out” the flame. Wax candles did not need to be snuffed so often as tallow candles because the wax did not melt as fast. They were produced from beeswax taken from the honeycomb, bayberries taken from the bush, or spermaceti taken from the sperm whale, and were more expensive than tallow. No matter the candle chosen, it was hardly the bright, maintenance-free, cost-effective solution against darkness to which the twenty-first century is accustomed.

Beeswax could be left untended for long periods because its melting point is higher than tallow and bayberry. Bayberry candles were the second most expensive but almost as popular in the colonies as tallow. This may have been because of their better light or because of their perfume. Spermaceti candles were the most dear and beyond the reach of most people like tradesmen. But a surprising number of shops seem to have gotten along with no candles at all.

Of 134 probate inventories for tradesmen from all thirteen colonies, more than seventy percent mention lighting equipment. More than half of these men kept artificial lighting around either as a primary source or just in case. But more than twenty-nine percent of the inventories show no such equipment at all.

The listing of an object in an inventory doesn’t tell how, or if, that object was used. But almost one third of these inventories don’t mention so much as a candlestick. That suggests that those tradesmen waited on the sun—much as John Harrow did that night so long ago.