Free, yes, from debauchery and vice, but hotbeds of sedition.

Adapted from “Coffeehouses, The Penny Universities” by Mike Olmert, first published in the journal Colonial Williamsburg in spring 2001.

Caffeine stimulates conversation in every century.

Coffeehouses in the 18th Century

The coffeehouse had it over the tavern, because it was widely thought you wouldn’t get drunk there. Coffeehouses served such other libations as tea, chocolate, and sometimes alcohol. But the strongest stimulant on offer was conversation: such talk as was the natural and obvious precursor to early modern revolutions, social, political, scientific, and intellectual.

Still, coffeehouses had their critics. Almost from the start of the English coffee craze, which dates from 1651, coffeehouses were pilloried by churchmen who suspected they were occasions of sin, by women who weren’t allowed inside, by tavern-keeps who resented the competition, and by the establishment who saw them as nurseries of murmuring and sedition.

The complaints went unheeded. Once people started drinking coffee, they could scarcely be stopped. More than 2,000 coffeehouses are documented in and around 17th and 18th-century London. 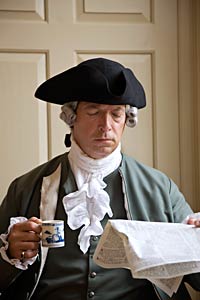 Only gentlemen were permitted in coffeehouses; ladies were barred from their amusements.

Wander down to the eastern end of Williamsburg’s Duke of Gloucester Street. Here, the site of the Exchange, the Capitol, and the Public Records Office conspire to suggest a more serious world, where considerations of money and property and power once filled the air. Until recently here stood the Cary Peyton Armistead House, a vast yellow-frame anachronism built in 1891. Beneath and inside it were the bones of the colonial capital’s most famous coffeehouse, R. Charlton’s. On this spot, in 1765, Governor Francis Fauquier reported that he was accosted by a Stamp Act mob, confronted by an angry throng while he was at “the Coffeehouse, in the porch of which I had seated myself with many of the council.”

A truck carried the Armistead house off its foundation to a North Henry Street lot in November 1995. An inspection revealed that two of the cellar’s brick walls dated to the mid-eighteenth century and were part of R. Charlton’s. More than a hundred wooden framing members from the original structure were reused in the nineteenth-century house. The angles at which they were cut, the tenons, framers’ scribe marks, and bits of the original plaster and paint were eloquent about the size and shape and decoration of the coffeehouse.

The continuing investigation of Colonial Williamsburg's coffeehouse site is interdisciplinary. Historians looking at legal documents are supported by architectural historians examining bits of brick and wood. They turned to dendrochronology for the 1749 date. Seasons of digging found archaeological evidence for what sort of fare, gustatory and intellectual, could be had at R. Charlton’s. At the site archaeologists found a set of human vertebrae and a finger bone with copper wires and a pin attached, possibly from an exhibit or an articulated human skeleton used in lectures.

Reconstruction detective work suggests the building was wooden, one-story high, and stood on a full-height brick basement. It was thirty-five feet square, erected on a plot hardly bigger than the footprint of the building, which had been carved out of the original Williamsburg Lot 58 in 1747.

The building was covered with sawn weatherboards painted Spanish brown, later painted white. The roof had wooden shingles. The basement was entered through a large door that opened out at grade level into the ravine outside the southeast corner. Goods would have been unloaded there before being taken upstairs. A vast base of brickwork smack in the center of the cellar may have been a kitchen; its chimney running up through the structure could have supported other hearths and other flues.

Debate and beverages are served hot at Charlton's.

Forums for News and Ideas

In time, coffeehouses also began providing tea, chocolate, and tobacco, three other benefits of England's growing global sway. But the most important innovation of the coffeehouse may have been news. The latest advices and circular letters with news of London and the world passed from hand to hand, were read aloud, and sometimes posted on a notice board. The coffeehouse was changing the way of life.

The coffeehouse had become the new court, an egalitarian and yet somewhat elite space, where men of all classes could mix and exchange ideas. Merchants and intellectuals who had no voice at court were heard out here. It is not too much to say that the American and French revolutions started out ab ovo —that is to say, from the egg—in coffeehouses. The coffeehouse had become, like the royal court at the height of the Restoration, a center for serious public discussion and for civilizing thought in general.

Inside the history of the coffeehouse may reside one of the secrets of America’s strange success as a new nation. Coffeehouses were an experiment in learning how society could regulate itself with something other than a royal court. In the best sense, coffeehouses were little parliaments, little universities, little news centers, and, despite their occasional inhumanity, little chapels.