“Williamsburg: the Story of a Patriot” restored 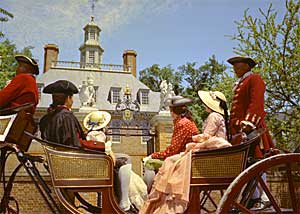 There was a time when it looked as if Colonial Williamsburg’s signature film, “Williamsburg: the Story of a Patriot,” was approaching the end of its run. Shown daily since 1957, it is the longest, continually screened film in American motion picture history. More than 30 million people have seen it, and now the film has physically deteriorated. Digital technology will mend the damage, saving it for generations to come.

“The Patriot,” financed by John D. Rockefeller Jr., who underwrote Colonial Williamsburg, depicts the years 1769 to 1776 and the dramatic tension leading up to the American Revolution. The story is told through the eyes of a fictional Virginia planter John Fry, played by a young Jack Lord.

The film was shot in and around Williamsburg, Va., in VistaVision, the first ultra-wide-screen format. The pioneering movie technology included Todd-AO six-channel stereo in one of the first uses of surround sound.

The twin Patriot Theatres at Colonial Williamsburg are the only cinematic environments ever created for the exhibition of a VistaVision motion picture. The screens are bent to mimic the natural viewing area of the eye, and six tracks of the film’s audio link sound sources to their screen locations, creating an unusual sense of reality.

All films scratch and tear and their colors fade. A print in a neighborhood theater begins to go bad after 250 showings and is ruined at 500. A print of “The Patriot” can last three times as long because of the care it gets in the Colonial Williamsburg Theater.

The film’s negatives were extensively restored in 1994, but the film would eventually have to be re-shot for about $12 million or digitally restored at a cost of more than $1 million. Colonial Williamsburg’s mission is to preserve the past for the future, so restoration was the obvious choice — for the mission and the money. It took two years of testing to find the best way to get the job done.

The separation masters must be recomposited, and the color corrected. In the original negative of “The Patriot,” the yellow layer is extremely faded, the magenta and cyan layers somewhat less. Each color must be rebalanced and the yellow layer brought to its original density. Afterward, each frame must be color and contrast balanced, and consecutive shots brought back into line.

The audio track for “The Patriot” has not deteriorated much. Copies of the audio will be cleaned up at Todd-AO, which did the original audio mix for the film.

Fans and friends of the film are paying part of the cost of digital restoration. Robert Harris of the Film Preserve, Ltd., a New York company specializing in the restoration of classic films, is supervising the work and collaborating with Pacific Title and Eastman Kodak’s CineSite. Harris has restored such classic films as “Lawrence of Arabia,” “Spartacus,” “My Fair Lady,” “Vertigo,” and “Rear Window.” He should finish “The Patriot” by fall 2003.

“Williamsburg: the Story of a Patriot” was produced in 1956 and directed by George Seaton, who won an academy award for “Miracle on 34th Street.” Composer Bernard Hermann, who won an Oscar for “Citizen Kane,” wrote the music for “The Patriot.”

The Patriot’s star, Jack Lord, later played Detective Steve McGarrett in the televised police drama “Hawaii Five-O.” He made the words “Book ‘em, Danno” synonymous with the series. When that show and its catch phrase are long forgotten, he will, through the film’s restoration, be repeating to new generations of audiences words more enduring. When asked if he would leave this new country and return “home” to England, his character said, “I am home.” The words captured a moment at the beginning of America.