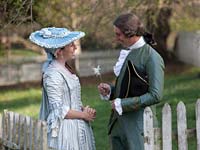 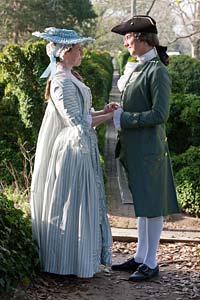 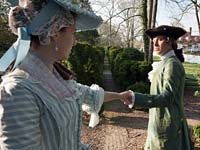 Editor’s note:
Another installment in a series of first-person, question-and-answer interviews with historic figures interpreted in Colonial Williamsburg's Historic Area.

Even during great moments in history, everyday life goes on. Children learn to read. Farmers harvest crops. And people fall in love. That's what happened to Edmund Randolph and Elizabeth "Betsy" Nicholas in Williamsburg during 1775. Then in their twenties, they came from leading local families, and had known each other all their lives. In street-theater presentations of Revolutionary City, Edmund proposes to Betsy. Here they discuss the Randolph-Nicholas engagement. Their comments have been edited and condensed.

You seem in good spirits. May I ask why?
Edmund: Indeed you may, sir. I just asked Miss Nicholas to be my wife, and she has accepted. Hence, I am the happiest man in Williamsburg.

Elizabeth: And I the happiest woman.

You've long known each other?
Edmund: That's correct. We've known each other since childhood and even learned to read from the same tutor. In fact, we were born just hours apart. I came into the world on August 10, 1753. Miss Nicholas arrived the next day. Amazingly enough, at the time, my aunt predicted that we would wed.

So your engagement was inevitable?
Elizabeth: Yes. It was to me, at least. It took a while to persuade Edmund of this, however. Certainly, the situation must have seemed clear to him when he asked me to attend a ball last year for Lady Dunmore, wife of Virginia's governor.

So everything fell into place?
Elizabeth: Not exactly. Our families have been divided on questions of politics and religion. My father is conservative in his views. Edmund's father strongly supports King George. Edmund's uncle, Peyton Randolph, believes that king and parliament have ignored our rights. As you might assume, the situation is complex. None of this, however, has affected the way Edmund and I feel about each other.

Mr. Randolph, do you share your father's views?
Edmund: I respect my father. Yet I sincerely disagree with him. My father is a good and principled man. I do not believe he understands how grievously Great Britain has damaged its relations with the colonies. Like my Uncle Peyton, I believe the time has come for us to break with England. Fortunately, politics have not affected my relation with Mr. Nicholas, who graciously gave me permission to marry his daughter when the other day I asked.

Then, everything has worked out for the best?
Elizabeth: Yes, it has. Nevertheless, politics almost presented us with one final obstacle. Edmund's father feels so strongly about the situation here that he has decided to take his family to England. When I heard of this, I feared that, despite his views, Edmund also would leave. Naturally, that would have led me to other concerns. Would Edmund propose to me before he left? If not, would I ever see him again? If he did choose to leave and proposed, and I said yes, would I leave my family and never see them again? Thank goodness, Edmund is remaining in America, and I will be with him.

Have you set a date for the wedding?
Elizabeth: No. How could we? I only said yes a few minutes ago. We've had neither time to tell anyone nor to plan a wedding, and plans must be made. In addition, Edmund is leaving Williamsburg soon.

You're leaving?
Edmund: I am. My support for the colonies' cause is more than a matter of words. I believe I must join the army. Accordingly, I have asked Uncle Peyton and Richard Henry Lee—who are with Congress—to recommend me to General George Washington. I am seeking an officer's commission. I will leave shortly for Philadelphia, where Congress is meeting. There, I will pick up the letters of commendation. Then, as quickly as possible, I will make my way to the army, which now is in Massachusetts.

When will you return?
Edmund: Much depends on what I find when I report to General Washington and what his needs are. I assure you that as soon as I can, I will return to Williamsburg for our wedding.

Elizabeth: And I'll be waiting until he does.

Elizabeth did wait. She and Edmund wed August 29, 1776. By all accounts, their thirty-one-year marriage was happy. 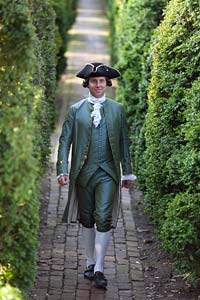 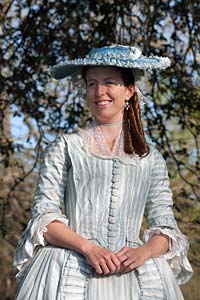 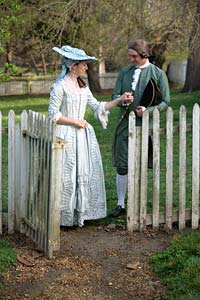 Edmund Randolph and Betsy Nicholas in a happy moment.