Designed in Regency style, to distinguish it from the eighteenth-century restoration, the Inn sits at the edge of the Historic Area.

The Williamsburg Inn under construction, shortly before it was completed in 1937 and the sixty-one rooms opened for guests. 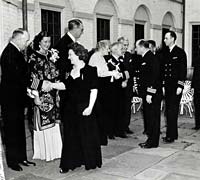 At the Inn, Abby Aldrich and John D. Rockefeller Jr. to the right of Kenneth Chorley, the tall foundation president. 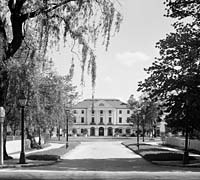 The Inn in early days.

The Inn as it appears today. The interior underwent extensive restoration in the past decade to enlarge and update the rooms. 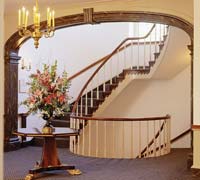 A staircase curves through a carved-wood arch in the Inn. 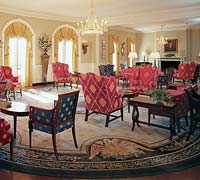 The lobby, with period seating, a chandelier, and fireplace.

Not content to direct Williamsburg's restoration from a distance, John D. and Abby Aldrich Rockefeller Jr. came often to the former colonial capital from New York, and they immersed themselves in all the planning and implementation, from sharing their vision to deciding on the tableware for a tavern. The Williamsburg Inn was a Rockefeller creation from the start.

Even before Colonial Williamsburg's Historic Area officially opened in 1934, the public streamed into town, and it became clear that people wanted to stay longer than a day. The need for a good hotel grew acute. But the Rockefellers didn't want a hotel. They wanted what they called a "magnificent hostelry," a comfortable inn that made guests feel like company at an old Virginia country estate. "I shall not be happy to go forward with the Inn," Rockefeller wrote in 1935, "until I feel that the most possible has been made of each room with regards to comfort, convenience and charm."

He also wanted to avoid misleading visitors into thinking that this inn was an original part of the eighteenth-century town. So he directed the architects to draw a design with historical, but not colonial, precedents and to build it just outside the restored area. Construction began in 1936. Modeled on the grand, mineral-springs resorts of antebellum Old Dominion, the sixty-one-room hostelry was completed in less than a year. Historic in aspect and modern in comfort, it was the first in the country to have central air-conditioning in the public areas and in most of the guest rooms. Every bathroom sink had a drinking water faucet beside the hot and cold taps.

The Rockefellers, who selected and arranged much of the furniture, were delighted with the result. A few weeks after it opened, Rockefeller wrote, "It is satisfying, beautiful, and home-like beyond my fondest dreams. I find nothing that I would like to see changed either outside or inside. And the public verdict seems to be quite the same. We have heard no complaints but many superlative expressions of enjoyment, appreciation and satisfaction. . . . You may have noticed that there appears in the New York papers each day now a list of the arrivals at the Williamsburg Inn, just the same as at the Hot Springs of Virginia or the White Sulphur Springs, so it would appear that Williamsburg has taken its place among the popular resorts of the South."

Seventy-five years later, the Inn remains faithful to the Rockefellers' exacting standards and tastes, providing luxury without fuss to hundreds of guests every day. Its prime location and its resort amenities—including golf courses, swimming pools, tennis courts, and a spa—draw guests from all parts of the globe, including a procession of royalty, heads of state, and celebrities. "It goes without saying that we are honored to host world leaders," says Richard Tate, executive manager. "But it is our particular honor to extend hospitality to the people we call our 'everyday celebrities,' the people who love Colonial Williamsburg, who return again and again, who develop deep emotional attachments to the Inn and use it to build their own family traditions." Indeed, holidays like Thanksgiving, Christmas, Valentine's Day, Easter, Mother's Day, and the Fourth of July find the Inn full of familiar faces.

Tate mentions the James McDonnell family of Ohio, who made 153 visits since their honeymoon in the 1960s, making the Inn an integral part of their lives. Some guests, including Dr. and Mrs. Irvin Schorsch, Mr. and Mrs. Joseph Hennage, Mr. and Mrs. James Millar, and Mr. and Mrs. Thomas Moyles have donated items from their decorative arts collections, lending homelike elegance to the public areas and hallways. "The Inn's ability to make guests feel at home is unique," says Clark Taggart, floral designer. "How many hotels inspire such warm affection that guests want to help decorate it with their own antiques?"

Elegant surroundings might count for little without the attentions of a first-rate staff, many of whom have worked for the Inn for decades. From the doormen who greet each guest with a quiet "Welcome home" to the concierge who assists with special arrangements and the chefs who accommodate dietary preferences, the Inn prides itself on delivering exceptional service as a matter of course.

There are other memories. During the dark years of World War II, it closed to civilians and hosted only military officers and their families. The rate? $3.00 a night. In 1966, the Inn installed its first color television in one of the larger rooms—by 1969, ten suites had televisions, much to the consternation of some guests who thought it unseemly. Although Prohibition ended a couple years before the Inn opened, buying a glass of wine or a cocktail did not become legal in Virginia until 1972. "Guests and locals would bring their own bottles, labeled with their names, to the Golden Horseshoe Club downstairs and be served from those," Tate says.

In 1997, the Inn earned a spot on the National Historic Landmark Register, an acknowledgment of its value to the country and a tribute to the Rockefellers' vision.