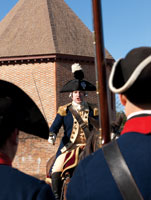 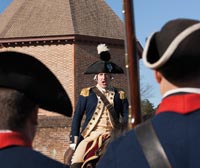 Mark Schneider as the Marquis de Lafayette exhorts the troops in front of the Historic Area’s Magazine. 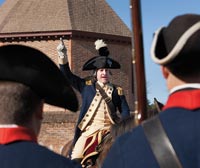 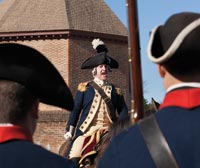 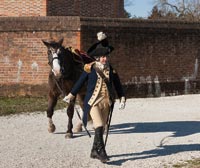 Lafayette lifts a glass at the Raleigh Tavern to toast the alliance between France and the United States.

Peopling the Past: Meet General Lafayette

A nobleman and captain in the French army, the Marquis de Lafayette joined George Washington’s forces in 1777. At the Siege of Yorktown in 1781, the Frenchman, age twenty-four, was a major general in the Continental Army, commanding the Light Infantry Division comprising American troops. Mark Schneider portrays Lafayette in Colonial Williamsburg’s Historic Area. Speaking as the marquis might have soon after the battle, Schneider discusses Lafayette’s military service, what he learned in America, and his impending return to France.

You soon leave for France?

My king, Louis XVI, has ordered me home. I am being promoted to maréchal de camp, brigadier general, in the French army. I will take command of an expeditionary force with a mission I cannot currently discuss.

Do you have other matters to attend to at home?

I do. General Washington asked me to seek more support for America from the French government. Though we won a great victory at Yorktown, the war is not over. The Americans still need money for troops, equipment, and food. Of course, I also want to visit my home, La Grange, and see my wife, Adrienne, and our children, Anastasie, and George Washington. I have not been with them in months.

Why did you join the American cause?

I came for many reasons. In part, I wanted to make my reputation as a soldier. I also desired revenge. England is a traditional enemy of France, and my father died fighting the English at the Battle of Minden in 1759. I also believe that America and France have a bright future together. Commerce between our nations can benefit both. Yet, above all other reasons, I came to fight for the rights of a new republic struggling against the tyranny of Great Britain. When I was a boy, my tutor introduced me to the concepts of freedom and the rights of man. I found—and find—them compelling. So much so, that I could not stand aside and watch this war from afar.

Your division did well at Yorktown.

In truth, sir, we did. Without boasting, I can say that my unit was instrumental in defeating the British. My men covered themselves in glory. They were the first troops to arrive on the battlefield and begin building our siege line. They also seized the enemy’s Redoubt Ten. This threatened his defensive line and, ultimately, forced his surrender. No officer ever commanded better soldiers.

You witnessed the British surrender?

I did, and it was the highpoint of my experience here. As I watched the formalities, I thought: “The fifth act of the play is over.” Two other ideas occurred to me. First, the American army has come full circle since the Charleston, South Carolina, garrison was forced to surrender in 1780. Second, I never imagined when I met Lord Cornwallis in London before I came to America that I would witness or be a party to his utter defeat here.

What ideas and lessons do you take back to France?

I’ve seen and learned much here. As a soldier, I believe I can improve the French army’s use of light infantry, which moves quickly and fights with great flexibility. Beyond military matters, I have seen the power and promise of the ideals of liberty, equality, and fraternity. I have witnessed in action the thoughts of the great philosophers—Montesquieu, Rousseau, and Voltaire. I observed that people from different backgrounds can cooperate to achieve great things. The Continental Army has Americans as well as foreign fighters. Truly, I believe this proves that all men are created equal.

Can the ideas be applied in France?

Sir, not only can they be applied in France; they must be applied in France. I remain loyal to King Louis and believe he wants what is best for our country. Yet I know that the people are unhappy. A few have much; many have nothing. Poverty and starvation are far too common. The situation must change. I believe America offers us hope and a model for the future.

On horseback, Schneider as Lafayette rides with Rex Ellis, as his aide. 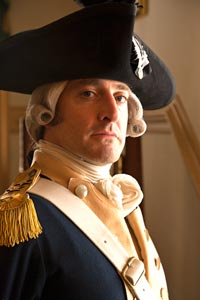 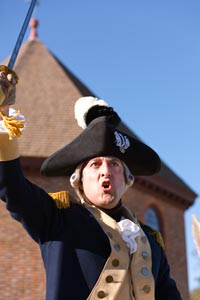 A major general in the Continental Army, Lafayette (Schneider) raises his sword to rally troops.