A new American in Williamsburg

A ceremony at the Kennedy Space center. 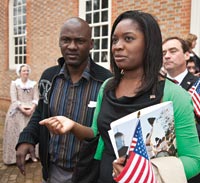 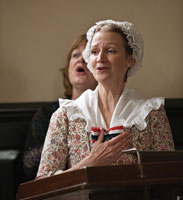 Interpreter Jane Hanson closes the ceremony at the House of Burgesses with “America the Beautiful.”

She was the first to arrive at the Capitol, the first of twenty-nine new Americans to be minted that afternoon in the chamber set aside for the House of Burgesses. She had grown up in southeastern Asia, left in 1991 with her United States Navy husband, and settled in Virginia Beach more than twenty years later. Then, she decided, it was time to become an American citizen. She passed the tests, filled in the forms, and was surprised—and excited—when she got the letter telling her that she would be sworn in just before Christmas at Colonial Williamsburg. As she sat in front of its reconstructed eighteenth-century legislative halls, her bright eyes took in the atmosphere and the costumed people offering greetings in the patois of 1700s. “Now I can see for myself exactly what they taught in my high school history in the Philippines,” Carmen Paraggua Allen said. “It makes me proud to be a citizen from now on.”

The United States is founded on an idea bigger than an ethnic identity. Immigrants arrive from around the world to embrace concepts based on the Declaration of Independence’s ideals of—to paraphrase penman Thomas Jefferson—all people created equal, free to seek life, liberty, and the pursuit of happiness, as well as take on the responsibilities and rights of the Constitution. The federal Citizenship and Immigration Services partners with historic sites and patriotic groups across the country in ceremonies to administer the oath and the Pledge of Allegiance to some of the hundreds of thousands of immigrants—more than 760,000 in 2012—who have chosen to become naturalized citizens.

"One of the tenets of the naturalization process is the new citizens learn about our government and our history,” CIS spokesman Daniel Cosgrove said in an interview. “So those are the best places to have the ceremonies.” A benefit of the public ceremonies, he said, is that natural-born Americans can “see how special it is to become an American citizen."

This December day, the overcast skies threatening rain could not dampen the spirits of the men and women joining Carmen Paraggua Allen for the 2:00 p.m. ritual. Usually, the British flag flies from the staff atop the brick building’s cupola, as it does on the city’s thoroughfares. That’s because Colonial Williamsburg portrays the years leading to the Revolutionary War when Virginia was still England’s. But on this December 17, in honor of the ceremony, the Stars and Stripes waved above.

Nigerian-born Priscilla Ochy Arthus is a twenty-seven-year-old University of Virginia law student whose parents brought her to the United States when she was ten. This was her first trip to Williamsburg. Her husband, who was born in Haiti and already was a citizen, came with her. “This is pretty cool,” she said. “I went to boarding school in England, and this reminds me of England. Then I saw the Union Jack everywhere and was a bit confused.”

Some historic sites conduct these rites of passage on the Fourth of July or in mid-September for Citizenship Day. Colonial Williamsburg sponsors a second swearing in June on Flag Day, June 14, every year. This summer, the featured speaker is Arianna Huffington, herself an immigrant and creator of the online Huffington Post.

At Mount Vernon, George Washington—or at least Dean Malissa, who portrays him—addressed 100 brand new citizens under a July 4 sun outside the Potomac River mansion. Some came from countries Washington would not have heard of—Vietnam, Belarus, Pakistan, Uzbekistan—or countries that had been part of the British Empire—Australia, Canada, Jamaica, Ghana, Kenya—before achieving their independence.

Washington told the new citizens, “When we declared our American independence and again when we ratified our Constitution, we were the only nation on the planet—let me say that again—the only country on Earth that was not under the control of men and women of absolute power. We alone for the first time in human history raised up a nation based on ideas, a nation of laws."

Indian-born Internet technology manager Ravi Marri and his wife, Nada, were among those sworn that day. They came to Mount Vernon from their Ashburn, Virginia, home. “We had to learn some American history and about the Revolution,” Marri said. Asked what he had learned about George Washington, he said, “He is the first president, and he is the founder and father of the nation. This is a special spot, compared to anything else in the United States.”

What prospective citizens have to learn about American history and the founding of the country has changed in the past five years, Cosgrove said. Applicants are given 100 questions to study covering United States history and government. They are tested on ten.

“In 2008 we redesigned the test so the questions were more reflective of the person’s knowledge of our history and government,” he said. “For example, in the past the question might have been, ‘How many stars are on the American flag?’ In the new test the question might be, ‘What do the stars on the flag represent?’”

Of those 100 questions, thirteen focus on the history of the colonial, Revolutionary, and founding eras. By studying the test at www.USCIS.gov/citizenship prospective citizens can check their answers to questions such as:

To be accepted for citizenship, applicants must answer at least six of the ten questions correctly on the final exam. Cosgrove said 92 percent pass on the first try.

Of course, mastering those basic facts is only a step in understanding the meaning of American citizenship. The idea that people can come from all over the world and become citizens in a new self-governing land was a novel, sometimes baffling, concept.

At the December ceremony, Colonial Williamsburg President Colin G. Campbell quoted an Italian historian who said nearly 100 years ago that it does “violence to common sense” to try to “transform subjects of old European monarchies into free citizens.” Yet the door is still open, Campbell said, and the presence of the twenty-nine new citizens was evidence that the process somehow still works.

Monticello, Thomas Jefferson’s home near Charlottesville, Virginia, celebrated its fiftieth anniversary of sponsoring a naturalization ceremony July 4, 2012. Former Olympic star Nadia Comaneci, a Romanian who became an American citizen in 2001, spoke to eighty-one new citizens from forty countries. “I come from a wonderful country with wonderful people,” she said. “But many years ago we were living under a system where we were told what to do and how to live our lives. In America, we all have the opportunity to write our own story.”

At the Benjamin Harrison home in Indianapolis, Indiana, ninety-eight new citizens from forty-five countries took the oath last July. Why Harrison? He was president when Ellis Island opened in 1892 as the portal for millions of immigrants, said Phyllis Geeslin, the home’s president and chief executive officer.

In that ceremony, officials used the historic location to emphasize the importance of the right to vote. New citizens immediately lined up to register under a nearby tent. Among them were Sylvia Pieper from Canada and her husband, Yemane Gessesse, whose life began in Ethiopia before she moved to India, to Canada, and to the United States in 1999.

“Not being American citizens, the one thing we missed the most was being able to get involved in the 2008 election process,” Gessesse told an Indianapolis Star reporter. “It is extremely important to be part of the community.”

Obama said, “Immigrants signed their names to our Declaration and helped win our independence. Immigrants helped lay the railroads and build our cities, calloused hand by calloused hand. Immigrants took up arms to preserve our union, to help defeat fascism, and to win the Cold War. Immigrants and their descendants helped pioneer new industries and fuel our Information Age, from Google to the iPhone. So the story of immigrants in America isn’t a story of ‘them’; it’s a story of ‘us.’ It’s who we are.”

In Burlington, Vermont, ten immigrants were being sworn in at Ethan Allen’s home. Among them was Arafa Arbab, who wept at the conclusion of a struggle of more than a decade that led her from Sudan to Syria, Jordan, and the United States five years ago as she sought religious freedom. “I’m overwhelmed. I’m so happy,” she told the Burlington Free Press.

In Portsmouth, New Hampshire, the Strawberry Banke Museum marks the waves of immigrants who had arrived beginning in 1630, making it a “neighborhood of newcomers,” as Fosters.com quoted museum president Lawrence Yerdon at a naturalization ceremony there last July.

From the deck of the square-rigged USS Constitution in Boston harbor to deck of the aircraft carrier USS Midway museum in San Diego, to the cruiser USS Little Rock tied up at Buffalo on Lake Erie, naval museums and historic ships offer ceremonies.

George Washington’s legacy is celebrated not just at Mount Vernon but also at Fraunces Tavern in New York City, where he bade farewell to officers of the Continental Army, and at Fort Necessity in Pennsylvania, where he surrendered his troops during the French and Indian War.

Outside Philadelphia’s Independence Hall new citizens assemble on the Fourth of July every year, and their children have their ceremony at the nearby Betsy Ross House. Similarly, children of new citizens were sworn in March 2012 at the Jamestown Settlement, next door to the site of the first permanent English colony in North America.

Some of America’s proudest places—Saratoga National Historic Park and Fort McHenry, to name two—put on events, and as many as 5,000 new citizens have been sworn in at Boston’s historic Fenway Park.

The Kennedy Space Center presented its first ceremony on the Fourth of July weekend in 2010 as 110 people from thirty-six countries congregated in the shadow of some of the biggest rockets the United States has produced. George William Dunne, a Roman Catholic priest who came to the United States from Ireland in 2001, told the National Aeronautics and Space Administration he was thrilled as an Irishman to be taking the oath in a spot name for John F. Kennedy, “the greatest Irish American, for us anyway.”

At Colonial Williamsburg in December, the new citizens filed into the House of Burgesses, where federal District Court Judge Mark S. Davis presided.

One by one they stood and announced their names and countries of origin— Cuba, Canada, Mexico, and Argentina in the Americas; the Philippines, Korea, Thailand, Cambodia, and China in East Asia; Sri Lanka, Pakistan, and India in South Asia; Egypt and Nigeria in Africa; and England in Europe.

Together they swore to renounce “all allegiance and fidelity to any foreign prince, potentate, state, or sovereignty of whom or which I have been subject or a citizen.” They promised to “support and defend the Constitution and laws of the United States of America against all enemies, foreign and domestic.”

Davis told them the oath “does not mean you abandon the culture of your former country. I hope you bring the best of your culture” to your adopted home.

Of all of the new citizens in the House of Burgesses that day, Englishman Tim Costelloe, a philosophy professor at the Williamsburg’s College of William and Mary, was one of the few who could identify the British kings and queens whose portraits dominate the chamber.

“That’s George II and that’s George III and Queen Caroline. Over there, that must be Queen Anne,” Costelloe said. He said he has been in the United States for twenty years, “a long time now, and I’ve had all those taxes to pay without representation. There is a nice irony that I am being sworn in here in the colonial capital, which kicked out my predecessors.”

Virginia-based journalist Gil Klein was a national correspondent for the Media General News Service in Washington, is a past president of the National Press Club, and is an American University assistant professor. He contributed to the summer 2012 journal a story about the uses of myths in history.
Back to Library