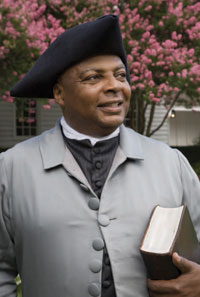 A free man and minister, Gowan Pamphlet, portrayed by James Ingram, began life as a slave. 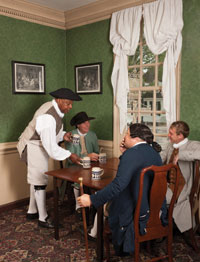 At the King's Arms Tavern, Pamphlet heard talk of liberty from the patrons that reaffirmed his belief that slaves must be free, too.

Pamphlet preached the Gospel to African Americans in Williamsburg, helping found what is now the First Baptist Church.

Born into colonial American slavery, Gowan Pamphlet became an ordained Baptist minister and helped start a church for African Americans, today's First Baptist Church of Williamsburg. Working for his owner, Pamphlet helped run the King's Arms Tavern, which counted among its patrons such men as Thomas Jefferson, George Mason, and George Washington. Pamphlet heard the debates over independence and about the events of the Revolution. Pamphlet's master freed him in 1793. James Ingram, who portrays Pamphlet and speaking as Pamphlet might, shares the preacher's views about faith and freedom on the day his enslavement ended. His comments have been condensed and edited.

Today you were emancipated.
I danced all morning with joy. I have wished for this all my life. This is good for me. It is good for my church. It is good for society. The laws of Virginia made me a slave. Now, the laws of Virginia have made me free. Yes, it is good to be free according to the law. Of course, my soul was freed when I became a Christian. Now, my body is free. Still, I must tell you this experience is bittersweet. I am free, but everybody in my community should be free. Yet they are not.

You believe slavery should end.
I do, sir. I get up every day and work to prove that the ideas people hold about Negroes are wrong. I agree with the words that Mr. Thomas Jefferson wrote in the Declaration of Independence. All of us are endowed by our Creator with unalienable rights. If God gave them to us, then everyone should have them. How can anybody pursue life, liberty, and happiness in chains?

Some of the Declaration disappoints you.
That's true. The original version of the document called for an end to slavery. That did not happen. I believe the issue should have been resolved in 1776, but it was not. All I can say is that this was a huge disappointment. I believe we are all Americans, and that means we all should be free. Working in the tavern over the years, I saw many white gentlemen raise a glass and offer a toast: “We will not be slaves to England.” I noticed that none of them looked at me when they spoke those words. The ideals of liberty have not been carried out. We fought for these ideals. Whites and blacks fought together for liberty and equality. We still have not achieved these—and will not—until all are able to sit at the table and feast of liberty.

What did you see during the Revolution?
I helped bury the dead after the Battle of Yorktown. It was bad. You could smell the bodies before you got to the battlefield. I saw the corpses on the ground. There were men in blue coats and others in red. I saw white men and black men. I noted that red blood flowed from all. Truly, I tell you, we are all of one blood. But are we equal?

Are you working to set others free?
I am. I fight every day. I am not, however, a soldier. I do not use muskets or swords. I use a different weapon. I employ the word of God.

What are your plans?
I will stay in Williamsburg. I am committed to my church and to the larger community. I will continue to grow my church and to teach others. The church is a place where we can learn together and lend each other mutual support. I also will prepare our next generation of religious leaders. We will help establish other churches in the area. We already are sending out missionaries. Some even have gone to Nova Scotia and Jamaica. From where I stand, the future is bright. Slavery will not endure. The system is wrong and immoral in all aspects. I foresee a time when this will end. Until all are able to taste the honey of freedom, we still have much fighting to do. 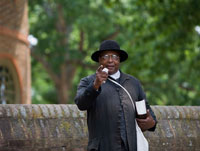 George Washington, portrayed by Ron Carnegie, and Gowan Pamphlet, interpreted by James Ingram, are seen together in Williamsburg. 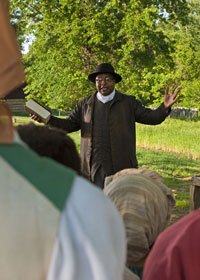 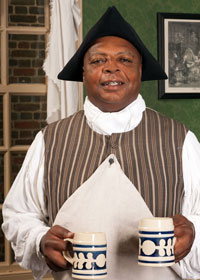