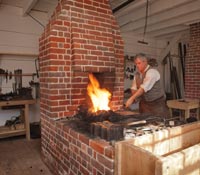 The armory, in white, anchors the Anderson complex 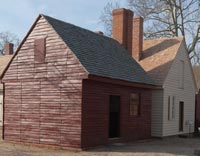 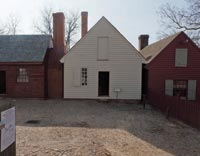 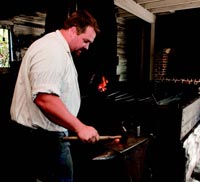 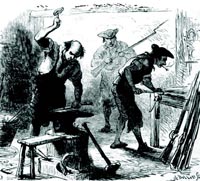 A nineteenth−century sketch of armorers making weapons for the Minutemen. 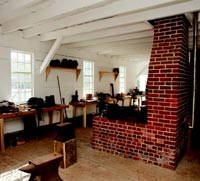 Interior of the reconstructed armory and its central forge.

An actor from the Admiral’s Men, a London theatrical troupe and rival to Shakespeare’s company, stopped November 16, 1587, at the shop of armorer Thomas Curson. He wanted a gun, he said, as a prop for a play. The weapon Curson handed him delivered not only a loud theatrical bang but a shot-load of bloody murder. Two bystanders—a child and a pregnant woman—lay dying. Another man was gravely injured.

The weapon was a “rusty Musket” that had long lain unused in Curson’s armory. It may have been brought to Curson to fix, but in the helter-skelter of a shop packed with firearms needing repair, it went unheeded. Or perhaps Curson fixed it, went out for a test firing, returned to make an adjustment, and loaded the piece again; after which, he was called to dinner. On a full stomach and a few pints, Curson forgot about it in the vast pile of muskets and handguns.

Curson took the accidental death hard, and spent the rest of his days giving away most of his wealth to the poor. He became renowned for his life of charity and—in a book published in 1662—was included in The Worthies of England, along with such men as the martyr Thomas Beckett and the poet John Donne.

Curson’s tale broadens and illuminates our understanding of the armorer’s life, and that of such men as James Anderson of the Public Armoury just off Williamsburg’s Duke of Gloucester Street. Curson’s tale helps us consider the nature of such places, and not just in a capital of Virginia but in other armories or arsenals on both sides of the Atlantic.

The word “armorer” comes into English from Norman French, meaning a maker of arms and weapons. From classical times, armorers were craftsmen—mainly working in metal—who made swords, knives, lances, helmets, and body armor, for warriors, clans, armies, and nations. The trade was so ancient and commonplace that the Greek god Hephaestus—Vulcan, for the Romans— was said to be armorer to the gods, making shields and weapons for the Olympians, and fashioning an unbreakable mesh to entrap the adulterous Aphrodite and Ares—Venus and Mars. Hephaestus made shields for Achilles and Aeneas; his iconography includes forges, anvils, hammers, tongs, and fire. He had become the god of the smiths, mortal businessmen whose quest was to make implements and weapons that were useful and beautiful.

The classical concern for artful practicality seems to have carried over to the armorers of the Middle Ages, who made offensive and defensive weapons for war as well as for military tournaments and jousts. But the inexorable triumph of gunpowder put an end to all that. Ornamental armor was fashioned for aristocrats and their sons throughout the seventeenth century. But the English Civil Wars, from 1642 to 1651, were about the last times they were seriously used near shots fired in anger. More and more, armorers found themselves working on firearms.

By Curson’s time in the late sixteenth century, every town had its complement of armorers. Some made guns from scratch, but most were tinkers— clever and essential repairmen. And that was especially true in the run up to, and in the aftermath of, battles. Armies with broken guns and swords and bayonets are fairly toothless. In the fog of war, it was not uncommon for soldiers to fire their muskets without first removing the ramrod from the barrel. Hence, a large demand for replacement ramrods, and more work for the armorer.

By the eighteenth century, armories were so important to the arts of war that armorers and their portable forges travelled with armies. British warships carried an armorer and forge to repair lots of metallic implements and weapons, particularly the rifles the ship’s marines used. Close-quarter naval engagements were a matter of bullets, not cannon balls, fired by marines up the masts and in the rigging. It was a French bullet to the shoulder that killed Admiral Nelson in 1805. And it was an arglebargle with the Polynesians over a pilfered pair of armorer’s tongs and a chisel from the ship Discovery that brought about the death of Captain Cook in Hawaii in 1779.

Such was the state of play in 1776 when Virginia appointed Williamsburg blacksmith James Anderson public armorer. He began work for the colony in the rear of a lot he owned that fronted a tavern along Duke of Gloucester Street. Starting in 1778, in the teeth of the War for Independence, his modest but thriving blacksmith operation was converted into a 68-by-20-foot building with four brick forges, complete with the requisite hooded flues and big leather bellows for ramping up the heat in the coals. It’s as formidable and bristling as a wood-framed building can be.

As such, Williamsburg’s Public Armoury could be called an arsenal, a place where arms were made, but also stored until needed. Such places were strategic, soft targets for any enemy. They deserved expensive, special precautions.

The word “arsenal” derives from the time of the Crusades and the Arabic phrase dar al sina, meaning a workshop or factory. In Italy, Spain, and England, the term got compressed to arzena, arsenale, and “arsenal” and was associated with specialized factories that made and stored naval matériel, which needed of course to be near water and a dock. In Williamsburg, the octagonal Powder Magazine of 1715 would also have been used as an arsenal, with some light gun repair and reconditioning usually under way.

Overall, the Public Armoury site in Williamsburg was a congeries of smaller buildings to supplement and support the forges. The foremost building was of course the new armory proper with its chimneys and forges. Second was a tin shop, converted from an old tenement building belonging to the property next door. Third was a story-and-a-half kitchen, where the food was prepared for the fifty-man workforce seven days a week. There were also a workshop, two storage buildings, and privies—at least one a two-holer— for fifty men.

Forty smiths—plus the crew of cooks who fed them—worked on such tasks as making replacement parts for guns at the forge; fashioning ramrods, bayonets, and officers’ swords; repairing guns and gun stocks; cutting patterns in the tin shop and shaping and soldering plates, camp kettles, saucepans, and speaking trumpets. We know, via archaeology, that scabbards with brass fittings were being made, that uniform buttons were being fashioned from animal bone and, perhaps, copper or tin, and that lead was being cast into shot at a small lead forge. Lots of work, lots of raw material, lots of product.

Workers seem to be turning the cows’ hooves into neat’s foot oil, possibly to prevent their leather bellows from drying out and cracking under the heat of the forges.

The main building on the Anderson site, which had been rented and used as a tavern before the war, became a dormitory. The workday was probably regulated by sunlight, which means that days were much longer in summer than winter.

The armory workforce was as varied as the colonies. For instance, there were soldiers as well as boys too young to fight. Scots soldiers taken as prisoners of war were put to work beside a French gunsmith.

And there were African American slaves. This is no surprise. It was common for slaves to be trained as blacksmiths in Virginia. In 1808, at Mount Airy in Richmond County, Virginia, there were five African smiths at the forge. Slaves were taught the trade so they could work the plantation forges or be hired out to others, with their wages devolving to their owners. Which may be the case at Anderson’s. A slave could have been loaned to the Public Armoury by a patriotic master, but it’s likely his wages went to repay the owner’s zeal. The workplace reflected racial and international diversity.

In the armory kitchen, the standard military diet was prepared for the whole crew, which meant that each day every worker was provided with meat and at least a pound of bread. The fare mainly was beef stew, plus forty pounds of dough rising overnight and baked the next morning.

The main meal was at midday, with leftover stew and bread for the evening’s supper and the next morning’s breakfast. At noon the next day, the whole cooking-and-eating cycle started anew. The three solid meals were probably a boon to recruitment since few in the lower classes ate so regularly and well. The military tradition of a dependable diet for soldiers accounts for the relatively easy raising of the armies that plagued the European landscape in the eighteenth century.

There must always have been lots of to-ing and fro-ing, hammering noise, smoke, refuse, clutter, stress, and tension on the armory site—just what you’d expect when, at any moment, the empire might strike back. This threat closed the Public Armoury. In 1780, the General Assembly moved the Virginia government from vulnerable Williamsburg to the comparative safety of Richmond. And when the capital left, so did its armory.

As with sixteenth-century London, there were a great many armorers in Virginia, but only James Anderson became public armorer. His success may be owed to his craftsmanship or his prices, but it likely didn’t hurt that he lived and worked within a quarter mile of the Capitol in Williamsburg.

Most Virginia armorers and gunsmiths, like London’s Thomas Curson, worked on a small scale. But there were large armories in the colony, notably the gun factory in Fredericksburg, a government operation supervised by Fielding Lewis, commissary general of munitions during the war and George Washington’s brother-in-law. At nearby Rappahannock Forge was another musket manufactory, privately run but subsidized by government contracts. Smaller but similar armories and arsenals stood at Chesterfield Courthouse, Warwick, and Albemarle. Westham, in Henrico County near Richmond, had the colony’s only cannon foundry, destroyed in a British raid on January 7, 1781.

Lord Cornwallis captured and burned a critical arsenal west of Richmond on the James River at Point of Fork on June 7, 1781. That day the Continental army lost 2,500 muskets, gunpowder, and casks of gun flints. Not destroyed were ten French cannons and mortars, which Cornwallis would soon employ in his losing defense of Yorktown. They would all be safely returned to General Washington four months later, on October 19, 1781.

The specifications for rebuilding the Point of Fork armory after the raid of 1781 survived. Their details—especially those involving security measures against future enemy attacks—were used in the 2012 reconstruction of Williamsburg’s Public Armoury.

Writing in 1662, Thomas Fuller—who gave us the life of Curson—says the highlights of London are St. Paul’s, London Bridge, the Tower of London, and the Armoury, which was inside the Tower. A visitor to Williamsburg between 1778 and 1781 might have rated the Public Armoury alongside the Courthouse or the Capital. It was constructed in wartime, and with speed, but is far more than merely fit-for-purpose. Like the durable and artful work turned out on the forges inside, the Public Armoury is metaphorical and eloquent.

Samuel Taylor Coleridge wrote in 1817, “Language is the armoury of the human mind; and at once contains the trophies of its past and the weapons of its future conquests.”

Michael Olmert is a professor in the English Department at the University of Maryland. He contributed to the Autumn 2011 journal “Orangeries: Meant to Break the Laws of Nature . . . and Look Good Doing It.“