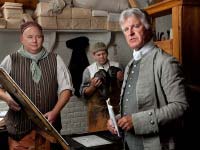 Editor’s note:
Another installment in a series of first-person, question-and-answer interviews with historic figures interpreted in Colonial Williamsburg’s Historic Area.

Alexander Purdie, owner of the Virginia Gazette, published the Declaration of Independence in the July 26, 1776, edition of his weekly newspaper. Born in Scotland, Purdie learned the printing trade there and came to Williamsburg, where he became owner of a print shop. He was an early and passionate believer in the American cause. Dennis Watson, who also comes from Scotland, portrays this patriot and discussed, in character, the publisher’s printing of the declaration and putting himself and his newspaper squarely in the American camp. His comments have been edited and condensed.

Mr. Purdie, thank you for taking time to talk. I know you are busy.
Indeed, sir, I am. Running a printing shop is a lot of work. Not only must I publish the Virginia Gazette every week, but I produce all sorts of other things, like pamphlets, broadsides, books, tickets. Government documents, too. Forms, reports, laws, and books.

How do you get the Gazette’s news?
It comes from many places. I write some items. I also reprint articles from English journals as well as some in America. Sometimes, people from across Virginia write to me, and I share their work with my readers. Remember, too, that advertising is important. People must know if property is for sale or a slave ran away.

This week you published a document from the Continental Congress, the Declaration of Independence.
As a printer, I have many sources of information. So I had heard that the men in Philadelphia were working on a declaration. I was wondering about its final form. When I first put hands on it and read it, I thought: what fine words. These are American words. They are powerful and will be around long after I am gone. I wonder what King George III would say, if he were to read it?

You are clearly pleased with the Declaration.
I am. To be part of a new nation is an historical moment. When has this ever happened in the world before? Congress has taken a step to break with England. We are going to be free. The fight will not be easy. Nevertheless, enough is enough. Reconciliation is no longer possible.

You also announced where you and the Gazette stand on war with England.
I did. In recent months, I changed the masthead several times. As the situation with Britain became strained, I used the words “Thirteen United Colonies” and “United we stand, divided we fall.” Now, I use a new phrase. On the front page, I have placed a picture of a coiled snake, saying, “Don’t tread on me.” The serpent represents our cause, and the English would do well to remember that a coiled snake does not retreat. It attacks. That’s exactly what we are ready to do–strike back.

Have readers reacted to “Don’t tread on me”?
People are talking about it. Those who mention it to me say they like it. I haven’t heard much from supporters of the crown.

Are you worried Britain, one of the most powerful nations on earth, might win this struggle?
Now, over a mug of ale I might wonder what would happen if we lose. Yet I am not going to worry about this in public. I am not really a doubting Thomas. I believe we must get on with this. We have got to think about winning. We cannot think about losing. We need to get on with the task at hand. When it comes to an end, we'll be in a better place.

You are a Scot. Scotland and England have a difficult history. Does that affect your views?
I am familiar with Scottish history and that Scotland and England have fought each other. I am not prejudiced against the English people, but I am prejudiced against the English government. I am not in favor of Parliament’s actions. As a Scot, I am well aware of how a hostile government can step in and lay burdens on you.

You have had a hectic week. What do you next?
Next? Well, to tell the truth, it is time to think about what I will put in the coming newspaper. 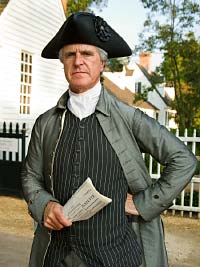 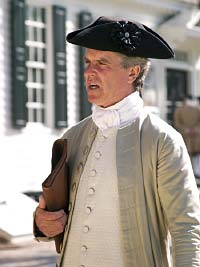 Mr. Purdie, portrayed by interpreter Dennis Watson, is a passionate believer in the American cause. 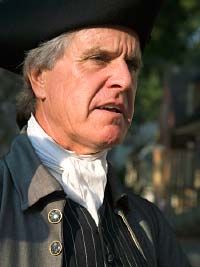 Alexander Purdie owns a print shop in Williamsburg where he printed the Declaration of Independence. 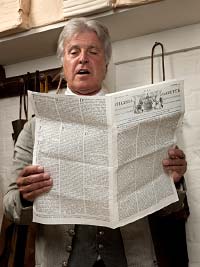 Dennis Watson, as Alexander Purdie, reads from The Virginia Gazette.