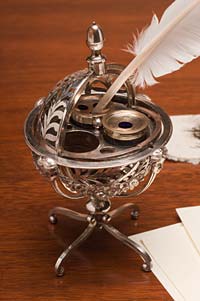 A silver globe inkstand, ca. 1795, with bottles for ink, sand, and quills, from the Colonial Williamsburg collections. 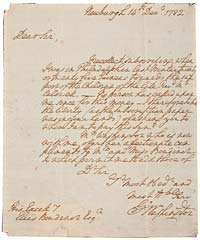 Letters from the well-to-do and well known don’t necessarily tell us more about the past than those from more modest walks of life.

At the Swem Library, Amy Schindler, left, and Beatriz Hardy. 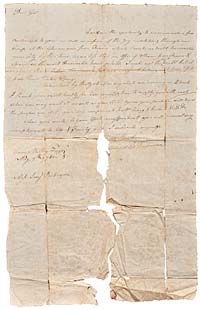 A letter home from a Williamsburg soldier at Valley Forge. 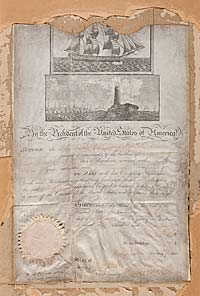 Letter from the past, delivered in the present

At Pamocra, his Virginia plantation near Williamsburg, John Dandridge sat August 30, 1793, and penned a short letter to Dr. John Hopkins, a Richmond merchant and United States Commissioner of Loans. More than 210 years later, his missive was delivered into a collector’s hands, thanks to something Dandridge and Hopkins never imagined, an Internet auction service.

Once the only way of communicating across long distances, handwritten letters—from lover to lover, from child to parent, from soldier to wife—are fading into history because of cell phones and electronic mail. Today’s means of communication have the advantage of instantaneousness, but the disadvantage of disappearing when the phone is turned off or the email deleted. Nevertheless, as 2000s’ technology supplants personal correspondence on paper, it helps preserve mail from the 1700s through an electronic marketplace.

Experts in eighteenth-century letters, documents, and other ephemera have mixed feelings about online auctions. Beatriz B. Hardy, director of the Special Collections Research Center at the Swem Library of the College of William and Mary in Williamsburg, said, “It’s easier to find out that items are being auctioned. The amount of information about past auctions available online also can make it easier to decide how much to bid. Some items that, in the past, a family may have simply considered as ‘Grandpa’s junk’ are now being offered on eBay.

“It’s great that they’re being saved, but it would be a lot better if they were given to an appropriate historical repository that could care properly for them and make them publicly available rather than going to a private collector.”

Stephen Roe, head of the manuscripts division at Sotheby’s auction house in London, said: “There is the chance to expand the market, with more people able to enter this fascinating market; also, sadly, there is the chance of more forgeries hitting the market.”

Many of the letters offered online were written by ordinary people about everyday matters. Dandridge’s letter mentions building a fence and going to court. Such commonplace content does not bother the experts.

“Any and all documents have some significance, even those that are relatively minor,” said Chris Coover, from the books and manuscripts division at Christie’s auction house in New York. “The most seemingly insignificant manuscript—say a promissory note for a modest amount—clearly documents two individuals in a particular time and place, and their interaction. Personal letters between family members record local news, however quotidian, and can give a clear impression of the concerns, situations, and activities of real people in a certain time and place.”

To Hardy, such letters expand the definition of history. “Over the past fifty years,” she said, “we’ve developed a much broader view of history than just the great leaders and big events. We’ve developed an appreciation of the importance of all peoples and of daily life. A letter by someone ordering a suit from a tailor reflects several areas of life. It gives you a sense of the style or fashions of the day, and that can be very helpful for people who work in museums or living-history sites, such as Colonial Williamsburg. And the letter reveals details of the working of the economy; marketing, consumption, production, exchange are all part of the letter.”

Coover said, “Sometimes, a prodigious quantity of ordinary letters, when carefully studied and analyzed, can make possible some remarkable findings.

“An excellent example is James M. McPherson’s For Cause and Comrades: Why Men Fought in the Civil War. McPherson patiently sifted through some 25,000 letters and hundreds of personal diaries, seeking to shed light on the deep motivations, beliefs, and convictions that animated and inspired the soldiers of that generation. Curiously, both sides, he found, expressed reverence for the Declaration of Independence and what they saw as the true legacy of the Founding Fathers.”

Coover said, “The documents and papers that do survive are a far smaller percentage than were created in the eighteenth and nineteenth centuries. Many letters and documents have suffered from the effects of fire or water damage, and a huge number, over the decades, have been thrown away by people who are unaware of their potential significance and don’t take the trouble to examine them closely enough to have any knowledge of what they are destroying.”

Hardy said that “even when people thought documents were important to save and tried to do so, the documents often haven’t survived. Fires, floods, etc. have taken their toll. Letters were much less likely to be saved. While undoubtedly some families, especially among the wealthiest and oldest, had a sense that their family stories were important and consciously kept letters, in many cases, the documents were saved as sort of happenstance.”

When such letters appear for sale on computer monitors, amateur and professional collectors should be cautious about bidding. Determining authenticity is a first step.

“There are relatively few forgeries that aren’t immediately apparent,” Coover said. “No forger ever gets all the elements exactly right. The most obvious signpost is the paper, which cannot be faked. Older paper is not readily available, and it must be exactly right for the period and the writer’s usage.”

Hardy recommends examining “the age of the paper, the type of ink, the handwriting and the language,” all of which “contribute to determining authenticity. You wouldn’t believe that something written with a magic marker was from the eighteenth century, for example, and the use of a modern phrase or word, such as ‘atomic,’ would be a tip-off of lack of authenticity. Provenance—the history of ownership of the document—also can help determine authenticity.”

Once a letter is determined to be genuine, its worth remains to be determined. Appraising a letter, Coover said, “is an extremely complex and very subjective process. Every manuscript is unique, letters particularly so, and this makes a search for comparables to guide in valuations very difficult. Sometimes, the best comparable is an item that changed hands privately or in a different market.” In other instances, “You have to trust your innate instincts and perception of the size of the potential market. The value of some letters and documents can only be determined by letting the free market operate, at auction.

“Often, while one letter may be of relatively little consequence, a sheaf of letters from the same individual written to the same recipient can be of much greater interest. This is true when the letters span a long time and cover a wide range of events.

“A correspondence—say, from a soldier during the Revolution, or a run of letters of Robert Morris, the ill-starred financier of the Revolution—would be of much greater historical significance than a single letter of each.”

Roe ticked off “celebrity, popularity, and content” as factors to be weighed, and Hardy listed “the writer, the recipient, the content, and its condition. Obviously, the better known a person was, the likelier that the value will be higher. For celebrity letters, the more content that’s in the handwriting of the celebrity, the better. A George Washington autograph on a letter in a clerk’s handwriting is valuable, but a letter written and signed by Washington is even more valuable.

“Content also matters. A note by Jefferson to himself to pick up some extra rum at a nearby tavern would not be as valuable as a letter by Jefferson giving the details of the signing of the Declaration of Independence.”

Just as twenty-first-century collectors surf for eighteenth-century mail, people of the 1700s did some gathering of their own. Coover said collecting letters and manuscripts is “an impulse that goes back even before the Alexandrian Library.

“But the type of manuscript collecting practiced today began in the eighteenth century in Europe and fully flowered in the United States in the first half of the nineteenth century. The most notable of the early American practitioners was William B. Sprague, who was allowed to examine all the letters in the late General Washington’s papers. As long as he left an accurate copy, he was allowed to keep the original letters.

“Another early collector was Jared Sparks, who is infamous for deliberately dismembering Washington’s discarded draft of his first inaugural address. Sparks liked to barter leaves from Washington’s manuscript in return for letters by others he lacked. These stray leaves—which can reveal much about how Washington saw his role as president—appear at auction from time to time. But twenty pages or so are untraced and presumed lost.”

If eighteenth-century letters turn up in a trunk in the attic, finders should handle them with care. Hardy said, “They should try to find out what they can about the people or events. It also may be of interest to a local historical society, library special collections department, or archives. Most institutions today have websites that provide more information about their collections, as well as contact information, so it’s easy to get in touch with them.”

Coover recommended that finders “read the document to see what it is, who wrote it, who was the recipient, and what is its import. People sometimes bring us large boxes or trunks filled with manuscripts. To my surprise, in many cases, they have hardly even looked to see what is in the archive. They are easily intimidated by the document’s apparent fragility and spooked by unfamiliar writing.”

There can be diamonds hidden among the stones, he said: “An otherwise boring diary or series of family letters mainly recording weather and local news may contain a long description of an election campaign, demonstrations against the Stamp Act, the convening of the Confederacy to draft a constitution, or a raid by Pancho Villa.

“The historical nuggets in original manuscripts are often buried, but rarely deeply. I once discovered an exceptional letter of Ethan Allen at the bottom of a pile of old deeds, copies of minor poetry, and otherwise uninteresting papers.”

The Dandridge letter has been probed for such glimpses into history. Martha Washington’s maiden name was Dandridge, and John Dandridge was her nephew. Dr. Hopkins, to whom the letter was addressed, has links to Williamsburg: in the early nineteenth century, he had an interest in the Blue Bell, a tavern near Christiana Campbell’s, as well as the stately Ludwell-Paradise House on Duke of Gloucester Street.

Dandridge enclosed with his letter another “for the Miss Custis’s,” Martha Washington’s grandchildren.

Read the sidebar: “In Love With Letters” »

Author James Breig bought the Dandridge letter. An Albany-based writer and editor, he contributed to the summer 2009 journal an article on eighteenth-century sea voyaging.