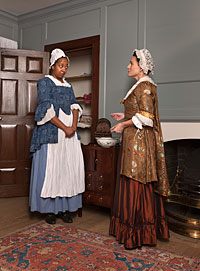 Hope Smith, left, as Eve and Carolyn Wilson as Elizabeth Randolph in the Peyton Randolph House in the Historic Area

Hope Smith as Eve making a bed in the Randolph House, one of many tasks Eve would have performed as maidservant

Editor’s note:
Another installment in a series of first-person, question-and-answer interviews with historic figures interpreted in Colonial Williamsburg’s Historic Area.

Williamsburg learned of the Declaration of Independence July 25, 1776. To slaves, it did not offer hope of liberty. Governor John Murray, fourth earl of Dunmore, had. In a proclamation issued during November 1775, the British promised to free the male slaves and indentured servants of rebels who repaired to the king’s standard. Some female African Americans followed the males. Interpreter Hope Smith portrays Eve, a house servant in the Randolph family. Speaking as Eve might have July 26, 1776, Smith offers a slave’s views on freedom. Her edited and condensed remarks appear below.

Eve, who owns you? What work do you do?
I belong to Mrs. Elizabeth Harrison Randolph, the widow of the late Peyton Randolph. I came to her about twenty years ago as a gift from her brother. I’m her maidservant. I help her with the upkeep of the home. I also spend time with her niece, Betsy, who lives with her, and is learning how to run a house properly.

How do the Randolphs treat you?
I’m their property. I’m not family. I’m not a friend. I’m not hired help. I’m not of their status. They own me.

You have heard about the Declaration of Independence. What do you think of it?
I am puzzled by it. The Declaration talks about freedom, but many of the men in Congress own slaves. How is that possible? Why do we hear the loudest cries for liberty from those who own slaves and benefit from their labor? I believe that we have as good a claim to independence as anyone else. Liberty is a jewel—a gift from Heaven to all men. I do not see how freedom can thrive if it lives side-by-side with slavery.

The British have offered freedom to slaves who leave their masters. What do you think of the idea?
I understand why the British are doing this. They are offering freedom to the slaves and indentured servants of their rebel masters. The British want to cause confusion for their enemy. Still, this was the first time since the conflict started that somebody offered freedom for people held in bondage.

Have slaves left for the British? What has become of them?
When we first heard about the proclamation, some people did leave. Many went with Lord Dunmore to Gwynn’s Island on Chesapeake Bay. Too many people were there. They did not have enough food, and smallpox ravaged them. I do not know what else has happened to them. But I do know that life in the army is hard, and so is following the army. I suppose that everyone who goes off to fight for either side knows there is a risk.

The British allowed slavery before the war. They allow it in their Caribbean sugar plantations. Do you trust them to set slaves free?
I trust them more than my current master. The British can give a slave freedom now. Americans might talk about it, but, when the war is over, they’ll still need slaves. In England, there are those who want to abolish the trade of slavery.

Say you ran away. How would you support yourself?
I have many skills. I could keep house, do laundry, and cook. I could work for anybody with a large home, because there’s so much to be done. I have learned many things about running a household at Mrs. Randolph’s. Perhaps, I could make enough money to buy a large home and keep a boarding house. I have been to Philadelphia, and I know that in a big city like that you can keep rooms and lead a comfortable life.

Would you go to Philadelphia, if you were free?
Where I went would depend on the condition of my family. I have family nearby, and I want to stay near them. I do know that cities are the best places to make a change. You have people going and coming. I have been with Mrs. Randolph for twenty years. She could free me at any time, but I doubt she will. If she would, though, I could go to Richmond or Norfolk.

Would freedom make you happy?
I think it would. It would lift a heavy burden off my shoulders that I have carried for years. I am not sure how I would feel. I know there would be responsibility, but it would pale compared to the burden of slavery. When you are a slave, you are reminded every day that you are somebody’s property. 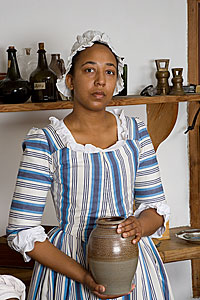 Hope Smith portrays a slave in the Peyton Randolph kitchen. 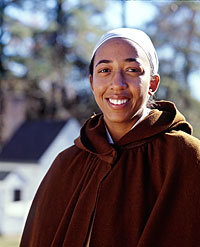