Debating the Bill of Rights

What No Government Should Refuse,
or Rest on Inference 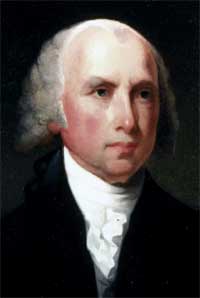 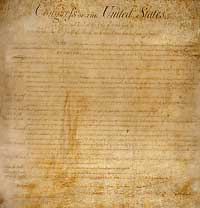 The Bill of Rights, reduced to ten amendments, down from the list of seventeen proposed to the first Congress in 1789. 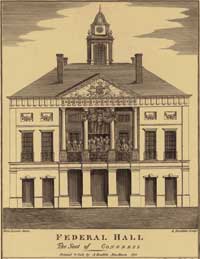 Federal Hall in New York, the country’s first federal capitol, where the Bill of Rights was debated and passed 1789. 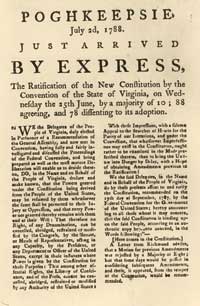 Virginia’s ratification of the Constitution in 1788 invoked “liberty of conscience,” later part of the First Amendment. 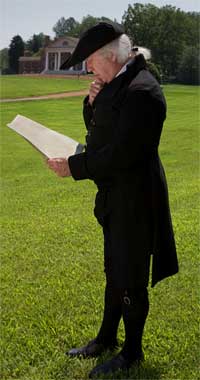 At Montpelier, the home of James Madison, John Douglas Hall as the father of the Constitution and the Bill of Rights 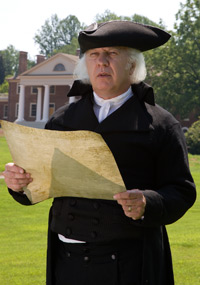 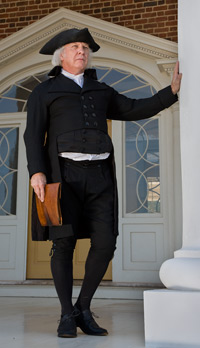 When presidents of the United States want to draw attention to authoritarian regimes elsewhere in the world, they remind us that people suffering under foreign tyrannies enjoy no fundamental rights, no freedom of religion, no freedom of speech, no freedom of assembly. . . . When American secretaries of state want to highlight abusive judicial systems, they note the lack of guarantees of due process, jury trials, and protection against self-incrimination. When lawmakers want to distinguish representative democracy from oppressive police states, they tell stories about unreasonable search and seizure and cruel and unusual punishment. Subjects of unenlightened dictatorships, we are told, lack the rights that make this the land of the free.

What this American set of freedoms has in common is its enshrinement in the Bill of Rights, the first ten amendments to the federal Constitution, ratified in 1791. These principles have not only come to seem as natural as the rights enumerated in the Declaration of Independence; after more than two centuries, they have the authority of Scripture. The ten amendments have almost become the Ten Commandments. Freedom of speech now seems as fundamental as the injunction against murder, and the right to avoid self-incrimination seems as basic to justice as “thou shalt not bear false witness.”

It is surprising to discover that these fundamental rights were so nettlesome to the people charged with framing the Constitution. The arguments over the Bill of Rights were sometimes bitter, beginning with whether the federal government should protect individual rights at all. The framers considered opening the Constitution with a list of natural rights, following the lead of most of the state constitutions, but decided against it. The document they sent to the states for ratification in 1787 had little to say on the subject.

That surprised John Adams, then in England, who wrote to Thomas Jefferson, then in Paris, “What think you of a Declaration of Rights? Should not such a Thing have preceded the Model?” Jefferson agreed: he found much to like about the new plan for a federal government, but he objected to “the omission of a bill of rights.” He wrote to his fellow Virginian, James Madison, the Constitution’s primary author, that “a bill of rights is what the people are entitled to against every government on earth, general or particular, & what no government should refuse, or rest on inference.” Events proved that Adams and Jefferson, from across the Atlantic, were more in tune with popular opinion than the members of the Constitutional Convention. Soon people throughout America were clamoring for a list of individual rights, refusing to base their fundamental freedoms on “inference.” But nearly as many were vocal in their struggle against any such list.

We cannot assume that those who fought against a bill of rights were reactionary, undemocratic, or anti-American, for some of the fiercest opposition came from the most passionate civil libertarians. Some said a bill of rights would not guarantee but restrict freedoms—that a list of specific rights would imply that they were granted by the government rather than inherent in nature. They also remembered a maxim of common law, expressio unius est exclusio alterius—the mention of one thing amounts to the exclusion of others. Guarantees of freedom of speech, press, religion, and so on might imply that these were the only freedoms to which citizens were entitled. Others said that the federal government could never be in a position to interfere with personal rights—those protections belonged in state constitutions—and that the Constitution should say nothing about them. “Why,” asked Alexander Hamilton in “Federalist 84,” “declare that things shall not be done which there is no power to do?” After all, the Constitution does not guarantee the right to food or drink, but no one feels the need to protect them from federal interference.

The battle lines were drawn, Federalists on one side and Antifederalists on the other. Federalists called for immediate ratification of the Constitution without amendment, but their united front concealed differences of opinion: some thought a bill of rights an essential first order of business for the new Congress, some believed it unnecessary but harmless, and others thought it an evil to be avoided. The other side was just as divided: some Antifederalists opposed the Constitution only because it lacked a bill of rights, and others opposed it on other grounds and merely used the bill of rights as an excuse to campaign against it.

Madison’s change of heart may have tipped the balance in the country at large: he came to agree to “a revisal of the constitution,” provided it was “a moderate one.” He was, he told Congress on June 8, 1789, “unwilling to see a door opened for a re-consideration of the whole structure of the government,” but he took the lead in consulting earlier guarantees of personal freedoms and drafting a set of amendments to the document he had composed two years earlier. The compromise proved effective, winning over enough holdouts to secure a Federalist victory. The states agreed to ratify the Constitution if the first Congress would set to work on a catalog of fundamental rights.

Once it was agreed that there should be a Bill of Rights, there was not universal agreement about which rights should be protected. So familiar and essential are the first ten amendments that many Americans are surprised to discover that Madison originally presented the House of Representatives with a list of seventeen Constitutional revisions, which the Congress whittled down to twelve—and that it was this bill of twelve amendments, not the famous ten, that went to the states for ratification. Two were rejected—one, about apportioning members of the House, has never been ratified; another, about Congressional salaries, was passed as the 27th Amendment in 1992, after 201 years.

The ten that succeeded could provoke controversy. Consider what now stands as the First Amendment, protecting freedom of religion, speech, the press, assembly, and petition. There is nothing more fundamentally American than the freedom of religion, and it seems appropriate that it stands at the head of the list. But what now holds the first position was the fourth amendment as drafted by Madison, and the third as sent to the states for ratification.

That in article 1st, section 9, between clauses 3 and 4, be inserted these clauses, to wit, The civil rights of none shall be abridged on account of religious belief or worship, nor shall any national religion be established, nor shall the full and equal rights of conscience be in any manner, or on any pretext infringed.

As soon as the amendment was introduced, Congress set to work changing it. Roger Sherman of Connecticut “thought the amendment altogether unnecessary,” though most agreed it was needed. The representatives drafting and revising the language were not certain what their words implied. Madison “said, he apprehended the meaning of the words to be, that congress should not establish a religion, and enforce the legal observation of it by law,” but Benjamin Huntington of Connecticut “feared . . . that the words might be taken with such latitude as to be extremely hurtful to the cause of religion,” since “others might find it convenient to put another construction upon it,” disallowing religious observation by the government.

Elbridge Gerry of Massachusetts “Did not like the term national”—Federalists and Antifederalists could not agree on what “national” meant. After listening to the debate, Samuel Livermore of New Hampshire “was not satisfied with that amendment,” and on August 15 proposed that it should read, “Congress shall make no laws touching religion, or infringing the rights of conscience.” Five days later, Fisher Ames of Massachusetts picked up on Livermore’s language and proposed, “Congress shall make no law establishing religion, or to prevent the free exercise thereof, or to infringe the rights of conscience.” By the time it left the House, the amendment read, “Congress shall make no law establishing religion or prohibiting the free exercise thereof, nor shall the rights of Conscience be infringed.”

September 3, during Senate debate, there came a proposal “to strike out these words, ‘Religion or prohibiting the free exercise thereof,’ and insert, ‘One Religious Sect or Society in preference to others’”—a proposal that had in mind the dangers of sectarianism, though it did not call for officially enforced secularism. The motion failed. The same day there was a motion to omit the article, though the Senate Journal records that it, too, “passed in the Negative.” Later in the day the Senate voted down another version: “Congress shall make no law establishing any particular denomination of religion in preference to another, or prohibiting the free exercise thereof, nor shall the rights of conscience be infringed.”

The Conference Committee resolved the differences between the House and Senate versions, and proposed, “Congress shall make no Law respecting an establishment of Religion, or prohibiting the free exercise thereof.” This is the version that left the Congress on September 25, and was ratified, along with the other rights in the First Amendment, by the states December 15, 1791.

With many scholars urging us to pay attention to the original intent of our Constitution, these drafts are relevant to modern jurisprudence. Most of the differences are small, but all are potentially significant, and over the centuries important Supreme Court of the United States cases have hinged on the smallest matters of expression.

Madison, for example, suggests in his original draft that his main concern is “civil rights,” a phrase dropped from the discussion in favor of a guarantee of the “free exercise” of religion. But what can Madison’s original intention tell us about how we should interpret the text today? Should “civil rights” be at the heart of our understanding of the amendment, because that is what Madison wanted? Or is it more important that the Congress removed that language in favor of what stands, and therefore specifically rejected that interpretation?

Nearly every clause went through the same kinds of revisions, some minute, some sweeping, but all offering new interpretations of the language of the Constitution. In Neil H. Cogan’s monumental collection of primary sources, The Complete Bill of Rights, the documents of the disputes over the Establishment and Free Exercise clauses fill only the first 82 of the book’s 708 pages, suggesting that the Bill of Rights underwent thousands of alterations. Countless modern Constitutional debates—the meaning of “militia” in the Second Amendment, the “right of the people to be secure in their persons” in the Fourth, the definition of “cruel and unusual punishments” in the Eighth—can be illuminated by an examination of the drafts and revisions the texts underwent. That most readers on every side of every question find in these documents what they were looking for should tell us that we have yet to settle the questions of interpretation.

Jefferson was convinced that our rights should not merely “rest on inference,” and the resulting document did much to clarify the principles we have since come to regard as quintessentially American. But the history of the creation of the Bill of Rights leaves us with many questions, uncertainties, and ambiguities. Perhaps it is only fitting for a nation founded on such a combination of idealistic principles and pragmatic compromise.

Jack Lynch, author of Becoming Shakespeare: The Unlikely Afterlife That Turned a Provincial Playwright into the Bard (Walker & Co., 2007), is associate professor of English at Rutgers University. He contributed to the summer 2008 journal the story "An Accidental Republic?"