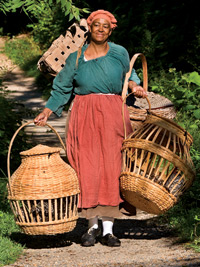 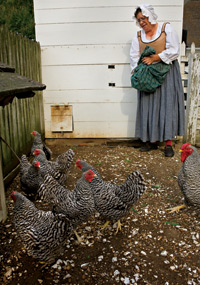 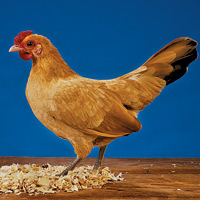 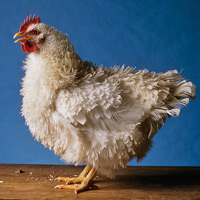 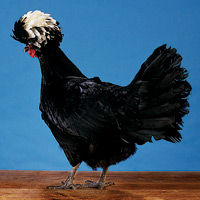 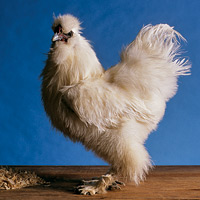 Top to bottom, four of the five breeds raised and exhibited at Colonial Williamsburg: Nankin, Frizzle, Polish, and Silkie.

Ryan Protz with a henhouse full of Nankin chickens, a breed kept by ordinary folk in the eighteenth century for meat and eggs.

If you think all chickens look exactly alike, and share one color, white, you have not seen Colonial Williamsburg’s. The hues of its poultry range from soft chestnut to black- and-white “stripes.” Some birds’ feathers surround their heads, like a duster. Others’ feathers curl away from their bodies, giving them an unsettling “bad hair day” appearance.

The five kinds of chickens scratching away in the Historic Area are an eye-opening glimpse of poultry common in the eighteenth century. Of the breeds, two—Dominique and Nankin—are endangered. The remaining three—Frizzle, Polish, and Silkie—were kept as showpieces two hundred years ago and now exist in gratifying numbers.

Though the Frizzles, Polish, and Silkies in colonial America tended to be adornments of the rich man’s henhouse, most colonists admired chickens not for looks but for taste. Dominiques and Nankins once were common on American farms, supplying meat and eggs.

They began disappearing as poultrymen developed specialized breeds for the high-production environment of modern poultry raising. As it does for other endangered domestic beasts, Colonial Williamsburg provides a home for these birds, a place where they can be raised and seen.

Chickens came early to the New World. Jamestown settlers brought the birds with them and so did the Pilgrims. They carried across the Atlantic breeds common in England at the time, animals with a long ancestry. The ancient Romans found chickens in England when they invaded, but, apparently unsatisfied with the local fare, they imported birds from Italy. Regardless of their country of origin, all chickens come from a common ancestor in south Asia known generally as the red jungle fowl, and scientifically as Gallus gallus.

During the 1700s in Britain’s North American colonies, chickens thrived everywhere. They appeared on plantations and middle-class farms, around slave quarters, in cages aboard ships at sea, and in the streets of cities and towns.

“Poultry was really, really common in the eighteenth century. If you were poor and you had any livestock, you had chickens. They were easy to raise. They reproduced in large numbers and reached sexual maturity early,” said Elaine Shirley, manager of Colonial Williamsburg’s rare breeds program.

Twenty-first-century Americans may assume that eighteenth-century chickens had the same place in the human diet as they do today, that chicken meat was cheap, plentiful, and available year round. It was not. For the most part, because of the animal’s reproductive cycle, chicken was a seasonal treat.

Hens lay eggs year round. They are, however, most productive during the spring and summer, when increased daylight signals the best time for making chicks. Hatching during warm weather lets chicks grow strong and prepare for winter’s rigors.

Modern breeders know well the impact that light has on egg output. Carefully controlled artificial illumination in modern henhouses fools the birds. It causes hens to lay hundreds of eggs throughout the year. Two hundred years ago, though, things happened according to nature’s shifts. Hens typically laid dozens of eggs annually.

Science now also has sped up the maturation process. “There’s been lots of genetic work done with chickens. So, today, they grow fast. It takes maybe six weeks from hatching to arriving at your table. In the 1700s, that trip took more like six months,” Shirley said.

There is, as well, a difference in diet. Today, carefully controlled feedings boost growth. In the 1700s, chickens ate table scraps or scavenged.

“Chickens consumed a lot of garden waste. For example, if you’d finished picking all the peas, then you pulled up the vines and fed them to the chickens. When you had a biscuit that didn’t rise properly or bread with mold, you threw it into the farmyard. Chickens love bugs and are omnivorous, so they eat meat and, sometimes, eat each other. They also love mice,” Shirley said.

Farmers and the poor let chickens roam. Referred to as “dung hill” chickens, these birds often could be found on a manure pile, pecking for insects. The rich, however, liked to keep their birds in a building, especially if they had a manicured garden.

At night, people tried to get the chickens into a safe place. Chickens are vulnerable to begin with, and poor night vision makes them easy game for predators, like weasels.

“Tending the poultry generally was a woman’s job,” Shirley said. “Many books written during the period confirm this and offer advice on raising and taking care of chickens.”

Raising chickens also was an important aspect of a slave’s life. Masters often allowed slaves to have the birds, though prohibiting them from owning other animals. Slaves not only raised chickens for their own diets but sometimes ran businesses selling birds and eggs.

The chief use of chickens was as dinner fare. Hundreds of eighteenth-century recipes suggest that with this meat cooks could offer a dish to suit almost every palate. Not only were breast, thighs, and legs devoured but livers, hearts, and gizzards. Of course, eggs also were popular, whether fried, scrambled, or made into omelets.

Without refrigeration, poultry dishes tended to be fresh. A cook would select a bird early in the morning, clean it, and serve it for lunch. Diners ate leftovers during the next several meals until everything was consumed.

Gardeners used chicken manure on plants. The feathers had almost no value. Goose down was preferred for bedding. Goose and turkey feathers made much better writing instruments.

According to Shirley, many modern guests find the chickens the most captivating of all the domesticated creatures in the Historic Area.

“When people learn how many different types of chickens exist,” she said, “their reactions are similar: ‘Wow! I’ve never seen a chicken like that. I thought all chickens were white. Cool! Chickens can be pretty.’”

Ed Crews, a Richmond-based writer, contributed to the autumn 2008 journal an article on Colonial Cockfighting.