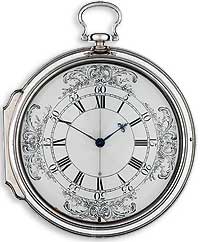 John Harrison’s marine timekeeper, the watch he produced that made calculation of longitude possible.

Until the eighteenth century, the arts of navigation and mapping were stymied by the inability to calculate longitude at sea. Latitude—the distance north or south of the equator—was reliably fixed by observing with a sextant how high the sun came above the horizon. Cook’s calculation of the latitude of an observatory in Tahiti was only out by about one hundred yards.

But to know longitude—how far east or west you are from where you started—you have to know the time at your location and at a reference point. By sighting the sun at noon, for example, you can determine local time. Comparing that with a clock set to the time at your reference point—say, Greenwich, England—tells you the rest. That is because local time changes by an hour in every 15 degrees you travel east or west—four minutes to a degree.

There was, however, no clock capable of accommodating its accuracy to the environment and motions of a ship. Your options were dead reckoning, or taking a complicated set of celestial observations of moon, stars, and the sun, and cross-referencing them to tables in a nautical almanac. The task was not for mathematical slouches and took three to four hours. Small wonder that after pinpointing what they thought was the longitude of the Solomon Islands on their charts of the Pacific Ocean, the early Spanish mapmakers were so far off the mark that nobody could find the islands again for almost two hundred years.

In 1735, English clock maker John Harrison built a marine timekeeper that portended a revolution in the navigator’s job. By 1764, he had perfected a mechanism, a chronometer that kept accurate time at sea despite the humidity, variations in temperature, and the rolling of the ship. England’s National Maritime Museum details the problem and Harrison’s solution at www.nmm.ac.uk/server/show/conWebDoc.355/viewPage/1.

Cook carried one of Harrison’s chronometers on his second voyage and proved that a watch could measure longitude. It kept time to within eight seconds in a day. The captain said it was “our faithful guide through all the vicissitudes of climates.” Cook took four of Harrison’s chronometers on his third voyage. The navigational feats and charting they facilitated were never bettered, and the accuracy of the maps Cook drew is still admired.

Andrew Gardner, who writes on Canada’s Salt Spring Island, contributed to the autumn 2005 journal an article about eighteenth-century veterinary science.