Rare Breeds and Other Creatures

Rare Leicester longwool lambs with their dams eye a visitor to their Historic Area pasture.

ANIMALS ARE as much a part of domestic life at Colonial Williamsburg today as they were in the eighteenth-century city. Animals plow fields, pull carriages, lay eggs, give milk, and serve for pets—and some end up on the dinner table.

Through them, Historic Area guests learn about the usefulness and adaptability of livestock, and how the institution's rare breeds program helps preserve the bloodlines of uncommon horses, sheep, poultry, and the like. Richard Nicoll, director of coach and livestock, suggested a book of photographs of them. Abigail Schumann arranged sessions for photographers David Doody, Tom Green, Barbara Lombardi, Kelly Mihalcoe, and Lael White.

Animals don't respond to requests to smile or look at the camera, and watching one's step in their domains is prudent. Patience is the virtue most required, but an eye for the unexpected is important, too. A photo shoot set up to capture horses yielded an unplanned shot of the stable cat, Tigger, stalking a mouse.

Presented here are a few of the photos selected for inclusion in the just-out volume Link to the Past, Bridge to the Future: Colonial Williamsburg's Animals. Written by John P. Hunter, it is available at www.williamsburgmarketplace.com. 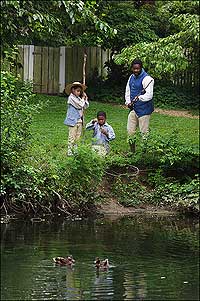 Demonstrating one of the ways colonials and animals interacted, interpreter Robert Watson and twins DeVonte and DeAndre Short fish in a duck pond. 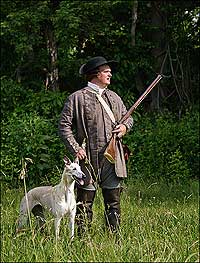 Interpreter Edward Merkley and his greyhound Heather strike a hunting pose beside a wood at Colonial Williamsburg's Carter's Grove plantation.

Brenda Rosseau, supervisor of research and design at the costume center, with Spike.

Interpreter Lee Peters and his dog Sally portray a hunter home from an eighteenth-century hunt. 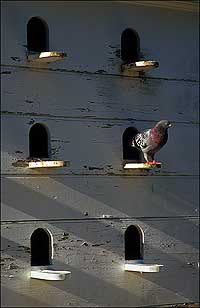 A wild pigeon finds a roost at the Wythe House dovecote. 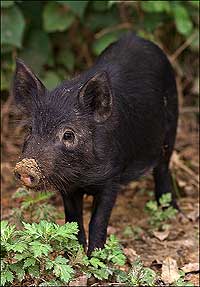 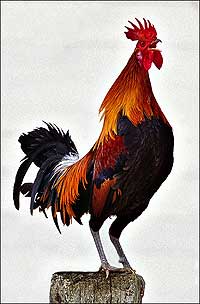 The Animals of the Historic Area Slideshow