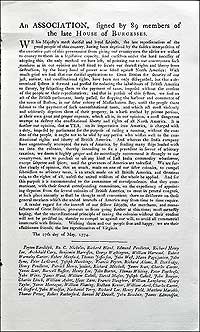 Members of the House of Burgesses announced their association in the Virginia Gazette after the Port of Boston was closed. 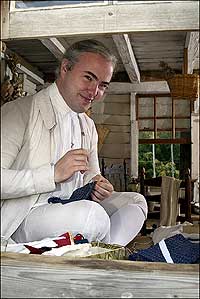 Tailor Thomas Hansford, interpreted by Mark Hutter, invites guests to the Millinery Shop to watch him work with needle and thread. There were sixteen tailors in 1774. 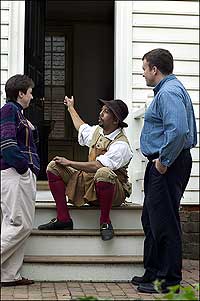 Interpreter Greg James regales Dawn Worsham and Todd Alleman with a description of how eighteenth-century gentlemen unwound in the Raleigh Tavern billiard room.

Guests help turn clay into green bricks each summer at a popular, participatory and kid-friendly Historic Area site. Each autumn the bricks are fired in an authentic kiln and are used, by the thousands, in projects around Colonial Williamsburg. 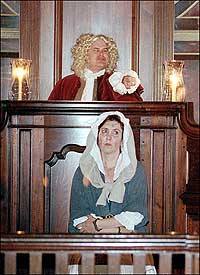 The trial of witch Grace Sherwood, here portrayed by Cathy Bush and judged by Steve Hollaway is always well attended. 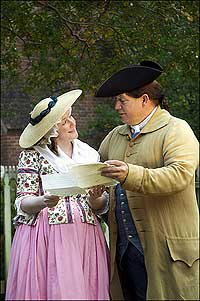 Costumed interpreters like Lee Holfelder and Tom Hay populate the rest of the Historic Area, ready to inform and converse.

The night of May 23, 1774, Patrick Henry, Thomas Jefferson, Richard Henry Lee, and other patriots serving in Virginia's General Assembly met in the council chamber on the second floor of the Capitol in Williamsburg to contrive a protest. Four days earlier, they had learned of the Boston Port Act, the bill passed by Parliament and signed by George III to punish the citizens of Massachusetts for supporting the Sons of Liberty and their destruction of East India Company tea the previous December. The protest that Henry, Jefferson, and Lee "cooked up," to use Jefferson's description, was a resolution for a Day of Fasting, Humiliation, and Prayer in support of the people of Boston. Their work that night set in train events that, in effect, would begin the American Revolution in Virginia.

More than 150 years later, the tumults of that year helped inspire the preservation, restoration, and reconstruction of the city in which those founding fathers conspired in the cause of freedom. Two hundred thirty years later, Americans, and people from around the world, come to Colonial Williamsburg to learn about their revolution, and the community that gave it context. The eighteenth-century stories Colonial Williamsburg tells are still compelling because the American Revolution resonates with ever-growing relevance in the world of today.

The Revolution is not Colonial Williamsburg's only story, but it is the backdrop to all the history it presents. Virginia in 1774 was an agricultural colony in which farmers and planters were occupied principally with raising wheat, tobacco, market crops, and livestock. Williamsburg was a small urban island in a sea of agriculture and rural pursuits. It was the seat of British executive authority and of colonial representative government. It was home to the College of William and Mary, merchants, and artisans. More than half of its population were enslaved.

In 2004, Colonial Williamsburg's guests will encounter the living community of 1774 as it confronts revolutionary changes in religion, education, land ownership, material culture, and consumerism. It is a community much like their own; a collection of people whose hopes and aspirations are good health, security for themselves and their families, improvement in their material lives, social order and stability, and a sense of connection to the spiritual. Colonial Virginians are attempting to live their lives, raise their families, and make their livelihoods against the backdrop of momentous events and processes.

Much as are we.

The Historic Area, a 301-acre complex of period homes, shops, streets, workplaces, and public buildings, is a community within a community. The first is the twenty-first-century community of costumed artisans, narrators, and actors who inhabit the second—the revived eighteenth-century town. Their charge is to bring the revolutionary community to life with "living history."

The presentation of living history at Colonial Williamsburg means costumed interpreters encouraging guests to step out of today and imagine they are witnessing, or sensing, another place and time. They use narrative and storytelling to dramatize the lives of people and events most relevant to a site or a theme. They perform the work and engage in the play that were parts of colonial life. The skilled historic trades workers, the musicians, the dancers, and the theatrical performers practice that technique. But costumed interpreters in domestic and rural trades sites, and other places where family and children's life is demonstrated, apply it as well.

Costumed character interpreters portray the lives of people whose names are taken from the historic record, Virginians who lived and operated in the period of the Revolution. By studying such documents as court papers, diaries, letters, newspapers, novels, and plays, character interpreters learn to reflect the attitudes, opinions, and world views of colonial Virginia society. By interacting with Governor Dunmore, listening to Thomas Jefferson, conversing with housewife Peachy Purdie, or Will, the hosteller at the Raleigh Tavern, guests come quickly to realize that history can change according to who is telling the story.

New to the Historic Area in 2004, beginning in the spring, are "streetscapes," vignettes played through the day around Market Square and along the Duke of Gloucester Street by character interpreters portraying 1770s Williamsburg residents.

Guests might discover themselves in the middle of an argument between John Randolph, a British loyalist, and a gentleman given to fervent American patriotism. They might overhear a conversation between Peter, a slave at the Raleigh, and Mingo, a man owned by Benjamin Powell, about a third slave who has run away from a nearby plantation to seek safe haven in Williamsburg. Guests might be asked to take sides in a disagreement between a husband and wife about whether she should purchase expensive satin cloth for a gown to wear during the coming season of balls and assemblies.

There are public audiences with Jefferson and Henry, discussions with Raleigh barkeep John Burgess of the troubles with England, and debates with political leaders at the Capitol. Governor's Palace guests hear from a costumed interpreter of Dunmore's dilemma—how the royal executive attempts to serve Virginians' interests while faithfully executing the policies of the English king and his ministry.

Guests who want to learn about Virginia's struggle toward self government will find that the choice for revolution was not easily made by most, and that the struggle for independence divided families and friends, caused suffering, and required sacrifice.

Woven through the fabric of colonial Virginia history is the coarse and knotted thread of slavery. Virginia was caught in a constant and palpable tension that discomforted and threatened its slaveholding society. By hearing and seeing the stories of enslaved people and free blacks, guests learn how slave labor in agriculture, domestic life, and skilled trades allowed the wealth and extravagance of upper-class whites, and eased the lives of many of the middlin' sort.

Colonial Williamsburg's newest interpretive site, Great Hopes Plantation, involves guests in the experience of most African Americans, men and women living and working in rural environments. In town, at the Raleigh, and in the backyard of the Peyton Randolph House, urban slave life is explored. Through interactions with enslaved people, like the cook Betty, guests can discover how slaves survived and coped with the harsh and often inhumane conditions in which they were forced to live. The Other Half, an outdoor walking tour, surveys the evolution of slavery in Virginia from its beginnings in 1619. It shows how, in two centuries, slaves and free blacks created an African American culture.

Religious ferment contributed to the revolutionary atmosphere. The authority and power of the Church of England, the established faith, were questioned and challenged by people at every level of society. Guests will learn about the increasing influence of the dissenting religions as people sought a more direct and personal relationship to the deity.

They'll find dissenting ministers, usually itinerants, Presbyterians and Baptists, interacting with townspeople. They might encounter an Anglican divine going about his duties as professor at the college, where religion and education are integral. They may speak with gentlemen of the town discussing their duties as leaders of the Bruton Parish vestry. African American characters will be found talking about their faith, and how they have been affected by the message of the Great Awakening.

By examining the material culture and decorative arts in Historic Area environs, guests can learn how changes in technology and commerce enabled a greater part of society to own and enjoy a wider and richer variety of goods. Costumed artisans working in shops and on sites reproduce items and artifacts like those found in colonial houses and workplaces.

Guests touch, smell, and hear about what's being made. Tradespeople, most speaking in the third person, some portraying characters, will engage them in discussions about the "stuff"—the eighteenth-century term—they make, how they make it, and why people wanted it. By observing the intricate work of the silversmiths, inspecting fine furniture at the cabinetmaker's, or examining the deadly beauty of a rifle at the gunsmith's, guests will appreciate the challenges of practicing these crafts with economy, skill, and artistry.

Family life was changing in revolutionary Virginia. Philosophies of education, childrearing, and parent-and-child relationships were evolving. So were ideas about government, faith, and labor. Children will be invited to join in work, learning, and leisure activities at such sites as Geddy House, where colonial family life is emphasized. Families are welcomed and encouraged to join hands-on and participatory activities at trade sites.

The nighttime lives in Williamsburg as well. A slate of evening programs extends the daytime's colonial experience. Guests are engaged, entertained, and educated through programs that complement earlier interpretations. Whether they are attending a candlelit concert at the Courthouse or Capitol, taking part in a historical drama such as "Cry Witch," or laughing along at a theatrical farce like The Anatomist, guests share the entertainments and diversions frequently and fondly attended by colonial Virginians.

Historic Area adventure anytime in 2004 will give guests a glimpse of the issues and concerns faced by Virginians of the revolutionary past, and a chance to see they were much the same in 1774 as today. A living history encounter with Colonial Williamsburg is an exploration of the creative tension between past and present, a chance to discover the people and processes from the past that have the power to inform and improve our comprehension of the present, and to inspire our choices for the future.

Bill Weldon is Colonial Williamsburg's senior manager for public history development, and a part-time Patrick Henry interpreter. He contributed to the summer 1990 journal an article about colonial brickmaking.