Cast in the Colonial Mold

Journeyman Roger Hohensee files a door knocker; journeyman Mike Noftsger pumps a bellows; apprentice Suzanne Dye makes a sand mold, and shop master Doc Hassell sharpens a sword. In the foreground is a bronze posnet made in the Getty Foundry for the Randolph kitchen in Colonial Williamsburg.

It's mostly in the molding. To cast molten brass, or pewter, or bronze, or anything else into candlesticks and carriage hardware, gun parts and spoons, andirons, sword hilts, and shoe buckles, and such, you have to be good with bellows, forge, tongs, crucible, hammer, file, and grindstone. But it's mostly in the molding. That's what they teach you at the James Geddy Foundry, reconstructed on the foundations of a workshop built by a Williamsburg family more than two and a half centuries ago.

George "Doc" Hassell is the shop master now. During his thirty years of working to preserve this eighteenth-century craft, he's cast hundreds of items—everything from reproduction fire engine parts to hardware for a copy of George Washington's coffin. It's hot, filthy work at a glowing forge, he and his foundry men bathed in sweat and covered with ash, coal dust, and dirt, pumping bellows, pouring liquid metal into a mold.

The margin for error is slight. "Usually you're working with a crucible of hot metal that you're gripping with huge tongs," Hassell says. "The object is to get the metal into the mold, not in your shoe."

Viewed broadly, the business is straightforward. An eighteenth-century text says, "The Founder requires a strong Constitution and a robust Body, to undergo the Heat of the Fire, &c. He has but few Principles to learn relating to his Trade, which he may soon acquire if he has any tolerable share of Acuteness."

In a single mold, the center gate for the molten metal divides halves of a candlestick and carriage window latches beneath.

The rough cast pieces are sawn off, soldered together, turned on a lathe, filed, and polished. One carriage latch didn't completely fill.

Hand-cast, hand-finished brass candlesticks blur the line between craftsmanship and art. Aesthetics counted as much as function.

To oversimplify, the founder puts the pattern of half an object like a candlestick in a frame and fills it with a fine, moist sand mixed with a little clay. He tamps the sand with a limber hickory mallet and his fingers to make it take an exact impression. A cast of the other half is made the same way. In both he cuts channels called sprues into the sand to accept molten metal, incises small holes to let gas escape, and locks the casts into iron containers called flasks.

From his forge the founder fetches with a pair of tongs a clay pot of melted metal and pours it into the sprue holes. Cooled and taken from the flasks, the halves of the castings are soldered together and polished. Individual molds are destroyed in the process. Frames, patterns, and sand—which used to come from rivers in England—are used repeatedly.

Each step requires knowledge and skill, but Hassell says the heart of the casting is in the mold making. So does journeyman Michael Noftsger: "I think the hardest aspect of our trade is the molding skills. If the mold has not been properly constructed, you will end up with an inferior casting.

"You have to be aware of the shapes that you are molding. For instance, each shape has a different degree for venting the gases safely, allowing the excess air to escape and not allowing the air to build up in a pocket to cause a void in the casting. You also must have the right number of channels or gates to ensure a complete and full casting. You must ensure that the gates are cut in the sand at the angles to allow for a proper feed or flow into the mold free from excess turbulence."

As you know, it's mostly in the molding.

James Geddy Sr. started the predecessor of today's foundry behind his house at the corner of Palace Green and Duke of Gloucester Street. After his death in 1744, his sons, William and David, ran the business. They did some gunsmithing, made such things as buttons and spoons, and refurbished other items from surgeon's instruments to razors and shears. They not only were skilled brass founders, but also were buckle makers, cutlers, and sword-smiths.

Hassell, Noftsger, journeyman Roger Hohensee, and apprentice Suzanne Dye stand in for the Geddys now. They work primarily in brass and bronze. Copper and tin make bronze; copper and zinc make brass. Bronze is stronger and more weather resistant. It was used for cannons, bells and metalwork on ships. Brass had decorative and functional applications for items from buckles to hinges on coach doors.

The work is carried on much as it was before—quite as impressively now as then, thank you. "The amazing thing about eighteenth-century technology is that it is very sophisticated," Hassell says. "All the knowledge of this craft was preserved and passed on in the workplace. Very little information was written down. You couldn't go to a university to learn this and you couldn't study metallurgy or chemistry. There were no labs, no books. All was learned and passed on from one generation to another."

Metalworkers in eighteenth-century Great Britain and colonial America had the same basic knowledge, but foundry size, organization, and operation differed.

British foundries tended to cluster in areas like Birmingham and Sheffield. The firms often were large and specialized. Some used just one metal or made one product, like candlesticks or thimbles. Many employed a sophisticated division of labor. In addition, British metal goods producers also had a well-developed products distribution network. Wholesalers employed salesmen. They called on retailers and carried pattern books to show lines of items.

"A lot of English stuff survives from the eighteenth century," Hassell says. "You always see good and bad pieces from any time, but, in my opinion, much of this work is of astonishingly high quality. They paid a lot of attention to design and had a sensitivity to appearance. You have to look hard to find eighteenth-century work that is ugly or clumsily done."

Handcrafted foundry goods vanished in the nineteenth century with industrialization. Metalworkers helped speed the transition. Late in the 1700s, British foundries made cylinders, pipes, and valves for the first steam engines.

Hassell says he thinks that the Geddy Foundry has an important role in the preservation of a sometimes overlooked aspect of Williamsburg's and our nation's history. "People readily see the value of preserving painting, architecture, music, and literature. Often, they don't think about our technological culture," he says.

"They don't think about the incredible achievements achieved by hand technology. In fact, it was an apex in the progress of human technology and hand craftsmanship. Soon after this period, the world would move into the Machine Age. The work we do at the foundry shows the culmination of a long era in human history, history made by ordinary people who worked with their hands." 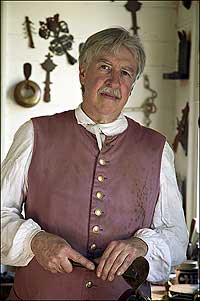 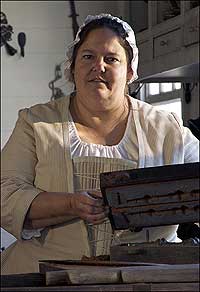 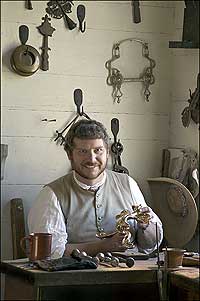 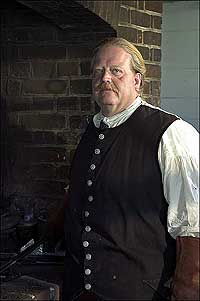 Richmond writer Ed Crews is the author of a long-running journal series on colonial trades. His story on coopering appeared in the autumn 2003 magazine.