The lawyer, the doctor, the man of the cloth. Among the dozen or so of the world's oldest professions and trades, they have been the bull's-eye of wits and wags since Roman comedy and the subject of the sketcher's pencil or brush for nearly as long. In the eighteenth century, satirical drawings of many figures — political, professional, social — made their way into the public's hands through a busy trade in cheap and plentiful prints.

In the following pages, British prints of the eighteenth century from the Colonial Williamsburg collections take a whack at many in the professional and working — and in many cases conniving — classes. At right, a rural magistrate, a man of little learning and less public spirit, nurses a gouty leg and displays greater familiarity with the punch bowl than the law books. Looking in his direction, an ass in the painting on the wall kicks over the statue of Justice while a local constable pleads the case of a compromised maiden to the bored clerk.

Nationalities — the French, German, Dutch, and Italian at the top of the heap — also received a lash of the cartoonist's brush, especially the French. The angular form of an overly refined or slovenly Frenchman, sadly lacking the vigor imparted by an English roast-beef diet, delighted the national prejudice. The print of the French dog barber below offers us a double dose, zapping both this unappealing example of his race and the idle rich who could afford such luxury for their pets.

A bull bursts into a milliner's shop and throws the customers into a panic. Note the two wigged lawyers making a scramble for the counter

The busy trade of the barber: cutting hair, shaving faces, resetting wigs. The seated gentleman on the left keeps his shaved head warm while waiting for his refurbished top, two dogs making contest over another wig.

Galleries of the foolish, the incompetent, and the corrupt. Portrayed is a row of dandified macaronis, as the foppish were called. The blind and perhaps senile Doctor Forceps, the Antiquarian dressed in the freshest of fashion, and the Antique Architect all imposed themselves on an ignorant public.

The lawyers' and their client doctor's names below reinforce the satirist's case. 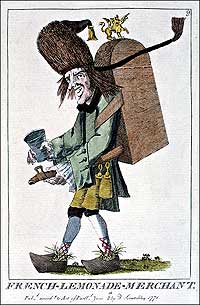 The Frenchman returns, this time as lemonade seller. Dirty, broken toothed, and hay-and-clog shod, he offers what is likely unsanitary refreshment to the street-strolling public. 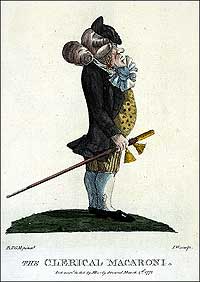 Deeply ridiculous and far too worldly, the Clerical Macaroni strutted the streets of London impressing the laity more with the cut of his cloth than the depth of his piety 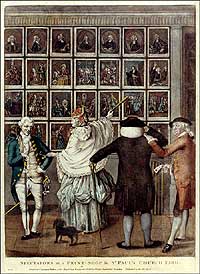 The display window of printmaker and seller Carrington Bowles. The famous and the fashionable were common subjects of his prints. A sheriff with an arrest warrant taps the shoulder of the gentleman on the right. 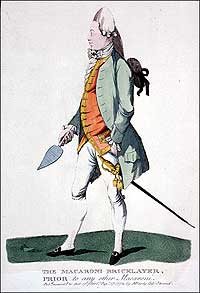 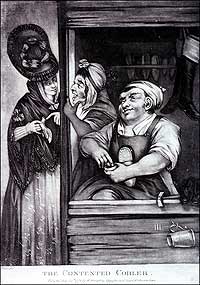 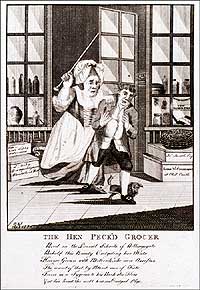 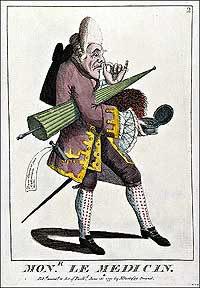 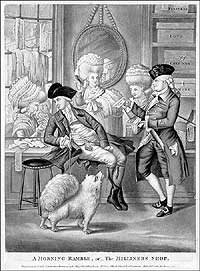