Learning to Be an American 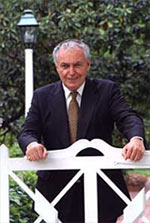 Colonial Williamsburg is the apex of a historic triangle traced by the roads and byways that wind from Duke of Gloucester Street to Jamestown and to Yorktown. Three little villages, they tell a consequential story of the beginnings of these United States, a story worth revisiting.

At Jamestown, in 1607, the English built, under harrowing conditions, their first permanent New World settlement, the birthplace of representative government in America. At Williamsburg, in 1776, Virginia patriots, defying tyranny and oppression, called their countrymen to arms, to sacrifice, and to independence. At Yorktown, in 1781, the ragtag Continentals and their resplendent allies the French, won the siege and battle that secured the victory of our Revolution. To journey from one of these hamlets to the next is to track the continuum of an adventure that deserves to be related authentically, thoughtfully, and well. It’s a story that belongs to the American people.

Colonial Williamsburg, the Association for the Preservation of Virginia Antiquities, the National Park Service, and the Commonwealth of Virginia are stewards of the settings for the narrative of an inspiring national saga. Our shared obligation is to faithfully interpret the triangle’s history, to tell its story seamlessly and unforgettably. That enduring duty is spotlighted by the approach of 2007, when the nation, indeed the world, celebrates Jamestown’s 400th anniversary and all that it means. We, the storytellers, are closely collaborating to present the scenes, to explain the facts, to explore the ideas, with the consummate care they deserve.

That’s a difficult task, but it is important. It is, quite frankly, good business, but, most important, it is our mission, and, in the heterogeneous nation we have become since 1607, the importance of that mission only grows.

What makes us a great nation is more than our history; it is as well the principles, ideals, and values that history teaches. Historian Gordon Wood, a Colonial Williamsburg trustee, said in a television interview that America’s great achievement is that “ours is a nation built of beliefs. To be an American is to believe in something, not to be someone. We have this marvelous country which is held together by ideology, by a set of beliefs that came out of the Revolution. It keeps us together. You don’t have to be someone. You don’t have to have a certain ancestor. You can learn to be an American by coming to believe in these things—liberty, equality, constitutionalism, and so on. You don’t have to come from a certain race or ethnicity. That’s not true of most of the world.”

Learning to be an American means understanding the lessons of America’s past, each generation embracing anew a set of common beliefs, sharing in the inheritance of ideals, whether we be the descendants of the oldest immigrant or ourselves the latest arrivals. Our diversity is a source of our strength. Jamestown’s anniversary emphasizes what we have achieved by learning to accommodate our differences in ethnicity, language, religion, and culture to a common belief in the principles of liberty and freedom. It’s a lesson well worth revisiting in 2007, a story well worth retelling. It is a story not just of dates and events but of an idea—the idea of America, for all people, for all time.