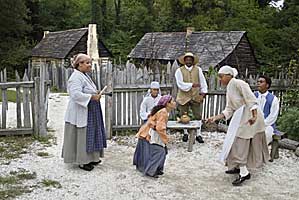 A life of their own: music and dance in the Slave Quarter at Carter’s Grove. From left, Kathaleen Getward, Michael Spry, Olivia Spry, Irving Tabb Jr., Latitia Tabb, and Andrew Holiday.

Music fills Colonial Williamsburg’s Historic Area. Throughout the year, guests can hear harpsichord and organ recitals, watch dancers at the Governor’s Palace, sing Christmas carols in the streets, and march behind the Fife and Drum Corps. No music in the restored colonial capital, however, carries as much impact or as many challenges as the songs known to slaves. Filled with emotion and meaning, they are powerful and painful, uplifting and melancholy, superficially benign and profoundly subversive. They also transcend boundaries of race and time.

“Music has the power to move and to change and to motivate and to inspire,” said Harvey Bakari, a program development manager and former African American interpreter. “These qualities are what made music such an important part of the Civil Rights movement. African American music of the 1700s is able to connect our staff and guests. It takes them to a place beyond the strictly intellectual realm where they can encounter some of the experience of the enslaved community.”

Colonial Williamsburg incorporated black music in educational programming during the 1980s, when an interpretive effort began focusing on African American life in the 1700s. A force in these endeavors was Rex Ellis, who started as an interpreter in the late 1970s. He eventually directed the Department of African-American Interpretation and Presentations and today is vice president of the Historic Area.

The Black Music Program featured singing and the playing of instruments. Through the presentation, guests learned how slaves used juba, clapping and keeping time with hands and feet, and djembes, drums, as well as shakes, bells, banjos, and fiddles. Other efforts, like “On Myne Own Time” and “African Traditions,” wedded narrative, song, and dance. Today, the evening programs “Spirit Voices” and “Remember Me When Freedom Comes” maintain this format.

From the beginning Colonial Williamsburg’s interpretation of African American music has been based on archival research, input from musical historians and ethnomusicologists, and a belief that music was important to colonial slaves. Through music, African Americans kept alive hope, resisted bondage, and eased the burdens of labor. Music always was with them. 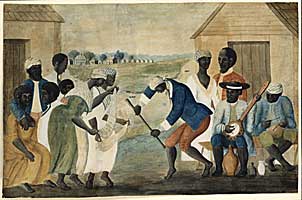 The Old Plantation, a watercolor thought to be from late eighteenth-century South Carolina, depicts a slave celebration.

“The black man sang all kinds of songs at all times. He sang psalms along with the white settlers and turned to hymns in the eighteenth century along with everyone else. He sang the old African songs as long as he could remember them—especially on the occasions of special slave festivals. . . . In the taverns and on the streets he sang the white man’s ballads and ribald songs,” wrote Eileen Southern of Harvard University in her book, The Music of Black Americans: A History.

Williamsburg interpreters also have embraced the idea that blacks preserved African musical traditions, techniques, and conventions while adopting European instruments and styles. Many modern scholars believe the melding of these two created the rich and influential American musical legacies of blues and jazz.

To appreciate African American music of the eighteenth century, we need an understanding of slavery in British North America. The first Africans arrived in the Virginia colony during 1619. Enslaved blacks became a major presence late in the seventeenth century, when the demand for cheap labor in the New World fueled the international trade in humans. By the Revolution, slavery was entrenched and legal in all North American British colonies. The institution was especially strong in Maryland and Virginia. Blacks accounted for slightly more than half of the Chesapeake region’s population by about 1750. Most were slaves and worked on farms and tobacco plantations. A few lived in urban areas, working as servants, coachmen, gardeners, and tradesmen.

Many slaves had ties to West Africa, a territory roughly between Cape Verde and the equator. The region had diverse religions, languages, traditions, and musical practices. Despite differences, these cultures generally embraced music in ceremonial and daily life. Music often was a communal activity.

“In Africa, music was a key essential of life. It was like breathing. With African music, everybody sang whether they were good or bad singers. Everybody participated. There was no audience,” said Art Johnson, a veteran African American interpreter and site manager of the Raleigh Tavern.

Historians know much about African music because African songs, dances, and instruments fascinated European traders and explorers. During the seventeenth and eighteenth centuries, they recorded their observations in letters, diaries, and books. They noted that in African life music preserved history, set the pace of work, enhanced ceremonies, and marked life’s major and minor events. Historian Southern reported that Africans sang to acknowledge marriages, births, baby’s first tooth, the beginning of puberty, initiation into tribal societies, and deaths. Women sang as they prepared food and cared for children.

Songs accompanied warriors into battle, traders in the marketplace, children at play, and farmers, cattle breeders, fishermen, and boatmen at work. If a song didn’t exist for an occasion, people improvised one.

Naturally, Africans turned to music in the worst of times. When first enslaved and on ships bound for the New World, they lamented their fate.

Eighteenth-century surgeon Ecroyde Claxton wrote of what he heard and saw in Africa: “The words of the songs used by them were, Madda! Madda! Yiera! Bemini! Madda! Aufera! that is to say, they were all sick, and by and by they should be no more; they also sung songs expressive of their fears of being beat, of their want of victuals, particularly the want of their native food, and of their never returning to their own country.” 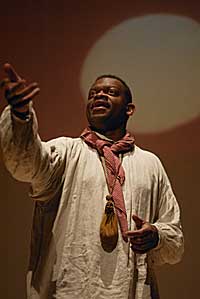 Colonial Williamsburg’s Harvey Bakari in “Remember Me When Freedom Comes,” a program of stories, song, and dance.

To Western ears, African singing was alien. One listener called it “a rude noyse.” Singers performed intensely, and liberally employed falsetto, shouts, groans, and deep rumblings. The nasal, loud, and shrill qualities of African singers deeply impressed Europeans. So did their tendency, unlike Westerners’, to use spontaneity, improvisation, and response in their performances. African instruments also seemed exotic. They included bells, flutes, horns, stringed instruments, xylophones, gourd shakers, and drums that ranged in size and sound.

Though much is known about African music in the 1700s, the record is not so robust when it comes to contemporary African American music. Neither former slaves nor whites wrote much about the subject before the nineteenth century. This led to several academic theories. One held that African musical traditions vanished under slavery. Another accepted their survival but maintained that a lack of documentary evidence prevented detailed or definitive study or conclusions. Another viewpoint has developed recently. Richard Crawford, a music historian and University of Michigan professor, wrote about it in his book America’s Musical Life: A History, published in 2001.

“No fact about black slaves in America is more crucial to this study than their continuing of oral traditions from the African cultures into which they were born,” Crawford wrote. “It was once assumed that the forcible removal of African Americans from their homeland had also destroyed their culture. But, that view now seems to have underrated black culture’s hardiness. It now seems clear that Africa-saturated oral traditions were maintained through slavery; slaves, for example, and black Africans in general, were often described as talented musicians.”

Bakari’s research confirms Crawford’s point that African musical idioms survived in North America. He has read documents and firsthand accounts. He has listened to recordings in the Smithsonian Folkways series as well as reviewed the work of folk-song collector Alan Lomax in the 1940s. Bakari visited Senegal in 2001 and learned traditional African hand drumming from a master musician. This experience is helping him create a drumming program, which he hopes will begin in 2003. Bakari also has lectured on his findings, as he did during the Williamsburg Institute program “The Music of Colonial Williamsburg” in 2002.

Bakari says the historical record is not as detailed and definitive as he might like. But he also believes that a failure to attempt to interpret African American music would run the risk of ignoring a vital aspect of the lives of slaves, and he is still researching the subject.
The record shows that African musical traditions survived in some places. Occasional reports from travelers, tutors, and British officers mention musical practices in the rural South that clearly had African origins. African traditions flourished in well-documented public celebrations by slaves on election days and Pentecost in the North, and weekly at Congo Square in New Orleans.

The historical record is not the only challenge Williamsburg interpreters face presenting colonial African American music. Like all interpreters, they must teach history engagingly in a short period without becoming simply entertainers. They also bear the burden of confronting slavery, something that can be difficult for African American guests and interpreters.

There is a need to avoid racial clichés. “We want to dispel stereotypes,” said Rose McAphee, who has performed the music as an interpreter and trains others. “If guests only see music and dance, they may leave believing they’ve seen a minstrel show. To understand this music, you need to understand African religious beliefs, respect for elders and survival skills. There is a big challenge here. The more you learn about this music, the more you begin to find that the songs and stories carry hidden meanings. You can’t leave that alone.”

Music based closely on African traditions demands skills unknown to twenty-first-century Americans regardless of their musical education. Richardson, who had little musical experience, found the training tough.

“It was challenging,” he said. “I am not musically inclined, but I had to learn a lot of new concepts, like syncopation. Then, I had to teach these to others, and I had to understand them well enough to explain things to guests.”

The experience wasn’t any easier for those with musical backgrounds. McAphee’s family loved music, and it was a central part of her childhood. Naturally, she learned Western musical styles and skills, which stress harmony, melody, musical notation, and singing from the diaphragm. This did not help her master African music, which stresses syncopation, improvisation, and nasal singing. Relying on her early training, McAphee discovered that as an interpreter her singing was too smooth. 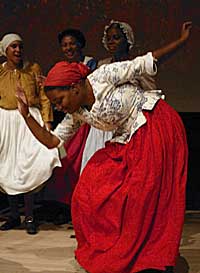 Jami Sullivan-Dionisio wheels in red during “Remember Me.”

Because of the music’s challenges, Colonial Williamsburg uses structured programs to provide context and focus. “Remember Me,” for example, is presented in an auditorium. The narrator is an interpreter portraying an eighteenth-century slave, Paris. Paris talks to the audience and tells of his boyhood enslavement, his experience on a slave ship, and his adult life at a James River tobacco plantation. As his story unfolds, other interpreters appear on stage. They drum, dance, and sing. They present work songs, traditional African music, and religious songs. They also mock their masters in song with masked references to behavior and dress.

Colonial Williamsburg presents African American music because guests respond to it emotionally, intellectually, and spontaneously, often tapping feet, clapping hands, and swaying to the rhythms. Guests respond to the music and, with the help of explanations, understand its place in colonial life.

The music also affects the people who perform—often in an immediate and unexpected way. “Performing this music becomes a release,” Bakari said. “I see interpreters come in to do an evening program after having a hard day. They are tired. Once people get into the music, once they start performing the music, suddenly you see a change. They get a second wind. The experience becomes more than a performance; it becomes cathartic. You can feel your spirit being lifted. You can tell when you’re doing a good job.”

Ed Crews contributed to the autumn journal “The Miller and the Windmill,”
a story about Colonial Williamsburg’s interpretation of eighteenth-century milling.