Monuments to Our Mortality 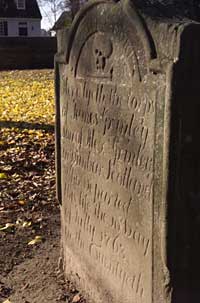 Colonial Williamsburg’s Historic Area portrays eighteenth-century life. Life. That spark of sentience in the endless dark of nothing. Down the corridors of time, life scrambles to its only end, the grave. With our forebears we share death’s dread acquaintance, the tradition of hope in a life ever after, and an impulse to raise monuments to our mortality.

Tombstones sequester the memories of loved ones and enemies, and of souls we never knew. The oldest in Williamsburg is let in the floor of a corner of Bruton Church. Dated 1688, it belongs to the parish’s first pastor, the Reverend Rowland Jones. Outside, in the churchyard, more than 150 markers rise. Passersby study the rain-worn inscriptions, reading ragged fragments of birth and burial in an early American capital. Beyond the red-brick, stoop-shouldered native-clay walls, tucked away in quiet hallows and inconspicuous enclosures, stand many more. In these pages, photographer Dave Doody shows us some stones, from Bruton to Williamsburg’s byways, that caught his eye. 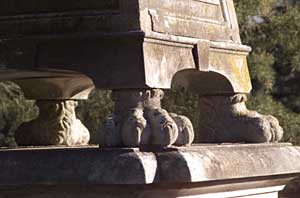 These clawed feet, taken from a family escutcheon, support a pyramidal eternal flame sculpture above the Bruton Parish Churchyard grave of Elizabeth Bray, who according to the inscription, “Consumed by a wasting disease, Gave up the ghost on the 22nd day of April, 1734 in her 32nd year,” and her husband, David, who “was snatched away by death . . . in the prime of his life . . . October 5th, 1731, aged 32.” The marble monument was imported from England. 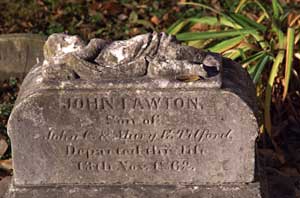 The rest of the inscription on this poignant nineteenth-century Bruton Parish Churchyard monument reads: “To Our Little Johnnie.” There are no other Tilford headstones in the graveyard to tell what became of his mother or father. 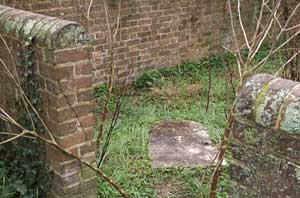 In a family plot behind the Custis Tenement rests a member of the Maupin family, left. Time has worn away much of the lettering on the marker. The first initial is J, and the middle M. Buried in 1870, the decedent was twenty-four. 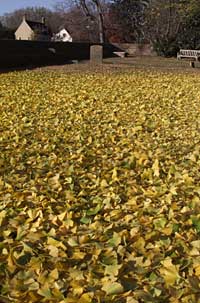 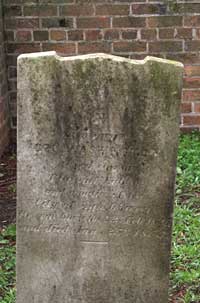 No relation, apparently, to the general and president interred at Mount Vernon, this George Washington, left, was buried in a family plot near the Taliaferro-Cole House, in the middle of Williamsburg, far from home. 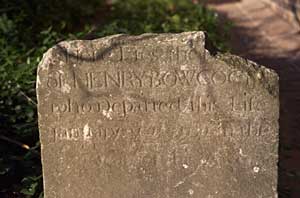 The unkind hand of time has broken the crest of the Bruton Parish gravestone that has marked the resting place of Henry Bowcock since 1730. 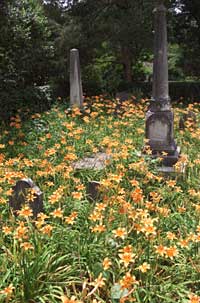 At right, day lilies carpet the ground in the Benjamin Waller Graveyard a few blocks to the south and east. 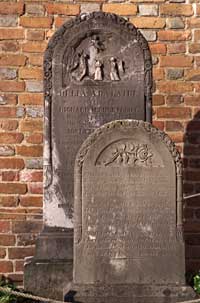 Also in the Bruton Parish Churchyard are the tombstones of Delia Adalaide Bucktrout, dead at forty in 1857.