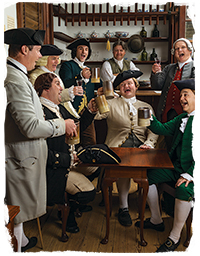 A musical called "Magna Carta 1215" celebrates the document's 800th anniversary in song. But according to The Virginia Gazette, there were drinking songs in Revolutionary times that literally sang Magna Carta's praises. 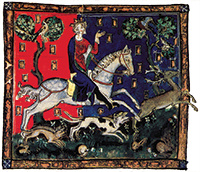 Magna Carta was an attempt by Medieval barons to force King John to abide by feudal law. 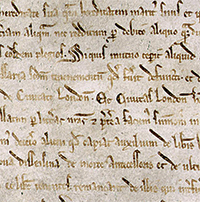 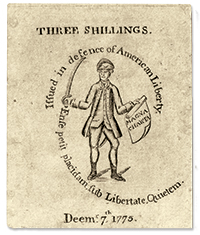 Magna Carta appears on a variety of official documents, seals and money. 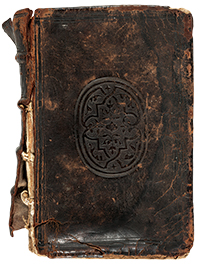 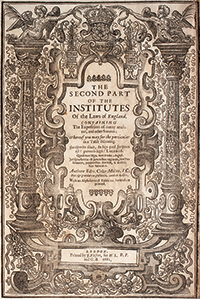 Sir Edward Coke's "Institutes of the Lawes of England", which cites Magna Carta, is considered the foundation of common law.

In the spring of 1786, Thomas Jefferson, then the American ambassador to France, crossed the English Channel to make his first and last visit to London. With John and Abigail Adams, he toured the British Museum, where he saw Queen Elizabeth’s prayer book, Roman antiquities and a copy of Magna Carta.

The document — revered by Jefferson, George Washington and other Founders — was signed in 1215, when King John and a group of English barons met in Runnymede, west of London, to settle disputes over such matters as taxes and loans. From their negotiations emerged a pact that formed the backbone of the English constitution, even though Pope Innocent III immediately invalidated it and few of its clauses have any relevance today.

Magna Carta (or Great Charter for its size and, later, for its esteem) evolved significantly in many incarnations. It conferred certain rights to English barons, who embraced it as a bulwark against a monarch’s abuse of absolute power. As a contractual agreement it helped to establish the very idea of a constitution and the importance of rule of law.

Sir Robert Worcester, chair of the Magna Carta 800th Committee, called the document “a ‘peace treaty’ meant to bind King John to return to the ‘ancient laws’ of England generally and the coronation oath of Henry I specifically.” However, while the barons were the first to be protected from monarchical hegemony, “much in Magna Carta applied to ‘common people.’ Of six uses of the word ‘freeman ’ in Magna Carta, four are clearly affecting the lives of lesser classes, even some including slaves,” Worcester said. Thomas McSweeney agrees. “The text is full of baronial self-interest,” said Sweeney, who teaches at The College of William & Mary Law School in Williamsburg. “But not every chapter can be explained purely from [that] interest.” One chapter, he noted, “essentially says that whatever John promises to his barons, [they] have to promise to their own vassals.”

Although the document signaled a great change in the relationship of monarchs and their subjects, as well as asserting that no one was above the law, it was almost smothered in its infancy. A.E. Dick Howard, professor of law at the University of Virginia, said that “King John never intended to honor the promises he made, but he died the next year. His successor, Henry III, was 9. Casting about for ways to draw support for the new king, his advisers had Magna Carta reissued. Thus began the tradition of successive monarchs reissuing [it] until, in 1297, it was placed on the Statute Books of England.”

With the charter a part of the legal tradition of the nation, said David Mao, law librarian at the Library of Congress, it “came to symbolize a promise from the king that he would not place himself above the law and that certain rights of his subjects were not his to curtail.” Its importance was renewed as Parliament started tussling with the crown for its share of power in the 16th century. That understanding, he continued, “crossed the Atlantic when the British settled North America and came to occupy a central position in the political life of the American colonies.”

Colonists considered the document “part of Americans’ birthright,” Howard said. The Virginia Company Charter of 1606 “contained the assurance that emigrants to Virginia and their posterity would enjoy the ‘privileges, franchises and immunities’ they would have enjoyed in England.”

Virginians strengthened their links to the charter in another way, according to Howard. “The legacy of Magna Carta was reinforced by the importation of English law books and by the flow of Americans to study law at the Inns of Court in London,” he said. Especially influential was the “Institutes of the Lawes of England,” by Sir Edward Coke. “The second part of the Institutes,” McSweeney pointed out, “begins with a line-by-line commentary” on Magna Carta. “Coke argues that England had an ‘ancient constitution ’ that went all the way back to the ancient Britons ... He saw Magna Carta as one statement of [those] rights.”

It was the preservation of the rights of Englishmen” that furious American colonists claimed to be defending in the years of crisis before the American Revolution. When Great Britain began taxing colonists to pay for the French and Indian War, Virginians and other colonials “sought to shape a constitutional case to support their grievances,” Howard said. “Citing Coke, they declared that what Parliament was doing contravened Magna Carta.” It was, as the slogan went, taxation without representation. Mao, of the Library of Congress, asserted that “many Americans believed that they were owed certain ... rights that the laws and customs of England had recognized over the centuries. Magna Carta was the very first statement of these rights.” A measure of American resolve, he added, was the colonial belief that “Magna Carta was the product of a dramatic political conflict in which people rose up and reasserted their inherent rights against a despotic king.”

As the itch for rebellion began to spread throughout British America, it was a short leap for colonists to connect George III’s behavior to King John’s:

In “Common Sense,” Thomas Paine called for a “continental charter” that would bind the colonies as a new nation in the same way the Magna Carta did for Britain.

Magna Carta’s influence on American colonists was summed up by early 20th-century writer Arthur Hunt Chute, who said that “Americanism began not with those embattled farmers at Concord Bridge, ‘who fired the shot heard round the world.’ It began across the ocean... in the meadows of Runnymede.” The document has been waved like a banner in many successive revolutions, including the drive toward emancipation. In 1848, The National Era, an African-American newspaper, wrote: “The fundamental liberties of Englishmen are the fundamental liberties of all Americans. The most important provisions of Magna Carta... are incorporated in the amendments of the national Constitution of this country.” The writer insisted that both sources — the 1215 charter and the 18th-century Constitution — prohibited “the warfare of the slaveholders now carried on against... our race.”

In the 21st century, Howard said, the 13th-century Magna Carta still “stands, above all, for the idea of the rule of law. I can think of no document — certainly none in the Anglo-American tradition — which is so readily invoked as standing for the principle that no one is above the law [and] for inherent limits on the power of government.”

To Mao, “the important legacy” of the document is that “after 800 years we still recognize fundamental rights in a legal system today. More importantly, Magna Carta allows us to remember that we are united with the people who laid the foundation for our constitutional system.”

Worcester, of the Magna Carta 800th Committee, says the power of the document can be found in how it “affects the lives of nearly 2 billion people in over 100 countries throughout the world. For centuries, it has influenced constitutional thinking worldwide.” Reflecting on what happens when the document is missing or forgotten, he added that “denials of Magna Carta’s basic principles have led to a loss of liberties and human rights, and even genocide, taking place yesterday, this morning, today and tomorrow.”