New Life for the Carolina Room 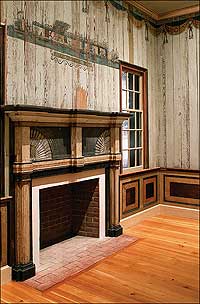 The Carolina Room in its new home. 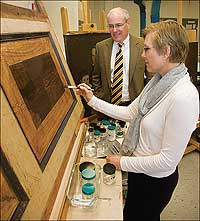 Shelley Svoboda cleans a panel in the conservation lab as Ronald Hurst looks on.

The Carolina Room as it appeared before being dismantled and moved, the catalyst for the ceiling-to-floor conservation under way.

Among the tools employed by conservators is a microscope to work on details too fine to see with the naked eye.

Visitors to the folk art museum can watch the progress of the Carolina Room’s restoration.

Visitors to Colonial Williamsburg’s Abby Aldrich Rockefeller Folk Art Museum may notice something afoot in the Carolina Room. That’s the 1830s North Carolina planter’s home parlor that has been the folk art collection centerpiece for more than half a century. If you have seen the fancy painted room before, you should notice changes—its relocation adjacent to the DeWitt Wallace Decorative Arts Museum with the folk art museum not the half of it. Parts of the room are brighter, bolder than the rest, despite areas of missing paint or boards. Depending on when you turn up, you may find a curator or conservator engaged in examination, removal, or reinstallation. And do not stay away too long. You will miss more of the metamorphosis going on before your eyes, as the icon gets a years’ long makeover to its original appearance, best as can be.

“Getting to the original paint is the goal,” conservator and project manager Shelley Svoboda says. “For decades, we’ve viewed the room through layers of grime, modern discolored varnish, and 1950s overpaint.” During relocation disassembly of the thirteen-foot-tall room in early 2004, cleaning tests showed most of the original surface had been hidden beneath restoration work done when the room was installed in the old museum location in 1956. The discovery prompted nearly three years of work to get it ready for the museum’s reopening in February 2007. Because conservation was incomplete, reinstallation moved forward in an exhibit focusing on the progress of the work, giving guests the opportunity to see a major treatment in progress—treatment that will continue for years, thanks in part to a $500,000 gift from Nebraskans Rex and Pat Lucke. When the work is finished, viewers will be able to appreciate fully the room’s 170-year-old appearance for the first time.

“We didn’t know how radically the 1956 installation had changed the room’s appearance,” says Ronald L. Hurst, Colonial Williamsburg’s vice president for collections and museums. “At that time, staff wanted to freshen the painted decoration, but in the process they covered up about 85 percent of what was there. Our aim this time around is to reveal and preserve the original paint that survives from 1836.”

The room came from a house constructed about 1830 in what is now Scotland County, but then was Richmond County, North Carolina. The building stood on the plantation of Colonel Alexander Shaw, who shared it with his wife, Sarah, and at the beginning of the Civil War owned 800 acres, three dozen slaves, and a half interest in a local turpentine distillery. Though no photographs of the building are known, Hurst has determined a likely floor plan, one found in other eastern North Carolina homes of the late eighteenth and early nineteenth centuries. It put two large first floor rooms with exterior doors leading to back and front porches, small rooms for sleeping and storage at each end of the rear porch, and bedchambers in an upper half-story. The kitchen would have stood a short distance from the main house.

Hurst is researching the Shaw interior’ s painter, Isaac M. Scott, about whom we know little. Scott put his name and the date August 17, 1836, above the door on the room’s west side. Though his initials have partly flaked away, Scott’s full signature survives on a small landscape painting dated 1843 in an 1828 house in a neighboring county.

The ancient art of decorating architectural surfaces with paint enjoyed a revival in late eighteenth-century America, when finishers sought to simulate costly cabinet-grade woods and decorative stone. Painting styles became more fanciful in the early nineteenth century, and the woodwork from the Shaw House exhibits both aesthetics. Pine doors and wainscoting resemble bird’s-eye maple, oak, and rosewood. Baseboards and the mantelpiece imitate veined marble. A band of swags, tassels, and rosettes around the top of the room mimics wallpaper borders popular at the time. The focal point of the room is the fireplace, with a “Vue of New-York” painted above the mantel. The scene likely depicts a sensational dockside blaze that destroyed New York’s Coenties Slip district in December 1835 and includes small firefighters and horse-drawn fire engines. The mantelpiece escaped the general overpainting of the 1950s. Recent removal of grime and localized overpaint reveals original surfaces, including faux stone, gilded fans, and varnish.

Scott laid out the lettering above the door and mantel with a straightedge but created the rest of his decoration freehand on the wooden walls as he moved around the room, mixing his paints from walnut or linseed oil and pigments. Blocked, shaded, and gilt letters suggest a familiarity with sign painting. Scrolls and flourishes around his signature and the “Vue of New-York” caption evoke the “lines of beauty” illustrated in early coach painter’s guidebooks, Svoboda says. Scott may have applied his knowledge of the media of these related painting trades.

Shaw died in 1863. The family fell on hard times. Tight money may have prevented the Shaws from updating their home’s décor. In 1911, the Shaws’ grandson built a large house on the family’s land, and by the 1930s the old house stood in decay. The interior painted features from at least two rooms survived, however, and caught the attention of a Winston-Salem antiques dealer, who purchased much of the woodwork. Colonial Williamsburg bought the room for the folk art museum in the 1950s. What was left of the 1830s Shaw House was demolished.

The jumble of hundreds of pieces that came to the folk art museum was a puzzle. “It passed through several different hands before being acquired by Colonial Williamsburg,” Svoboda says, “and got reshuffled with each move.” Nevertheless, Colonial Williamsburg pieced the room together and mounted it in 1956.

Cleaning tests in 2004 done to prepare for relocation showed conservators the 1956 overpaint was thick. For example, the blue fields of the vertical boards had a refresher coat of blue paint, an “antique” toner, and a topcoat of varnish, all of which had yellowed. Beneath that, in some areas, lay the soot and grime of more than a century. These layers obscured the brightness of the original surfaces. Removal of the overpaint and dirt from test spots exposed the nuance and artistic skill of faux wood, stone, and wallpaper patterns—the painter’s brushstrokes.

“Once you start peeling back the paint from the 1950s, you are coming into the presence of the painter himself; you can feel his humanness,” Svoboda says. “The room is an amazing survival story; now we need to take it back to its original look to have something of true value. The integrity of the room lies in the original painted surfaces.”

Fluctuating temperatures and humidity make wood expand and contract, cracking and flaking paint. Wood’s acidity causes chemical discoloration. Likewise, dirt and soot from nineteenth-century open light and heat sources took their toll. The Shaw House woodwork suffered from these effects in 1956. The strong cleaning and overpainting of the original decoration that installers used to brighten and homogenize the room’s look were appropriate at the time but would be out of step with today’s conservation practices. In 2004, the necessity of a new conservation loomed.

Before the preservation and cleaning to reveal the original painted surfaces could start, the room had to be removed from the old museum location. Former Colonial Williamsburg conservator Mark Kutney tackled the deinstallation challenges. “It was unclear how it was going to be done,” objects conservator David Blanchfield says. “The boards could have easily shattered during removal.” In 1956, the room had been nailed onto wooden furring strips mounted on a cinderblock enclosure, with at least ten square ship’s nails in each board, in pairs about every two feet. Careful coaxing with padded hammers, wedges, and shims loosened sheets of boards at a time. Hacksaw blades cut modern nails, freeing pieces from the walls and individual boards from one another. The process required hundreds of hours but proceeded with little damage to the woodwork.

The new installation required that the room be mounted in a way that minimized such difficulties for the future and enabled Svoboda and her team to remove untreated boards for transfer to the conservation laboratory. Blanchfield designed the system. He dismissed an initial idea of screwing the boards in place, deeming it too intrusive and unsightly for a long-term work in progress. Instead of screwing or nailing the boards, his design employs pairs of support screws in the back of each tongue-and-groove board, whose heads fit into horizontal keyhole-shaped slots routed into wooden two-by-fours on the plywood mounting walls. Every few feet, a zipper board lifts out with an upward push to give the boards on either side space to be slid over and removed. The innovations of this first-of-its-kind system improve upon mountings that require putting fasteners through the painted surfaces.

“Now we should be able to disassemble the whole room in one work day, though it might be a long one,” Blanchfield says.

Meanwhile, paint conservation work in the lab proceeds in phases. In the first, conservators reattach loose paint flakes with adhesives. Next, they remove the 1956 overpaint. Then the original paint must be cleaned of surface grime. When all non-original material has been removed, losses to the decorative scheme will be in-painted to a degree appropriate for an object of this age. “The work is very demanding and time-consuming,” Svoboda says. “The original paint is quite thin in places, and we have to be very careful with everything we do.”

Svoboda and her team must assess the inherent instability of the surfaces to be treated, and select cleaning and stabilization solutions from among three thousand compounds in their lab. Staff must balance time, chemistry, and swab pressure as they apply solvents, brushes, and wiping agents to the mix of oil-based varnishes and lead paint of the 1950s outer surface.

In order not to disturb the historic paints and varnishes, the conservators perform these tasks with magnifiers and white light and ultraviolet microscopes. When a microscopic paint sample is viewed in cross-section under ultraviolet light, the 1830s varnish can fluoresce, showing a line of demarcation between original and later layers.

There are 138 vertical boards in the upper wall. The section of swag at the top of each can take from about twelve hours to more than two weeks to clean. Gilded letters require extra time and care in cleaning under the microscope. The simple blue field that makes up most of each board’s surface can take eight hours.

Getting back to the original surfaces has uncovered other heretofore-undetected modifications. Conservators in 1956 were confused by extra pieces that came with the Shaw acquisition, boards from other rooms of the house. During the current conservation, out-of-place items have come to light. For example, the 1956 restoration masked two distinct baseboard patterns with overpaint so they would appear to match. New wood decorated with schemes correct for the room will replace the heavily damaged original baseboards.

Likewise, installers of fifty years ago wrestled with how to put an antique room into a modern cinderblock shell. Newly exposed original paint lines show the room Scott painted to have been out of square by as much as two and a half inches and that 1950s restorers added wood strips at the corners to square it. Remounted in its new space, the room stands again authentically out-of-square, revealing original paint surfaces to the viewer’s eye.

Robert Doares, an instructor in Colonial Williamsburg’s department of interpretive training, contributed to the 2007 holiday journal an article about Jewish autumn holidays.

The Museums of Colonial Williamsburg