photos by Dave Doody
text by Harold B. Gill Jr. 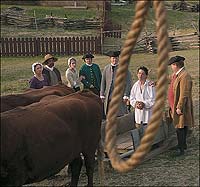 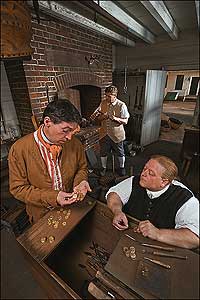 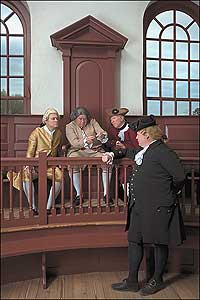 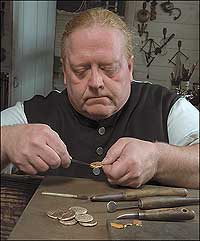 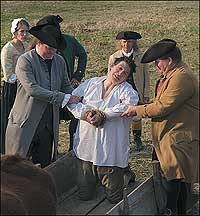 Jackson went to the gallows despite efforts to secure a pardon.

Eighteenth-century Virginians denominated counterfeiting a capital crime in two senses of the word. An attack on the currency, and therefore the economy, of his majesty's colony, it was treason, a felony punishable by the hangman.

Consider the case of silversmith Lowe Jackson, turned off on Williamsburg's gallows, despite pleas from the powerful for his pardon, for making his own Spanish doubloons. The beginning of his end was the attempt of Williamsburg barber Robert Lyon to spend one of the bogus coins in the summer of 1750. As General Court Judge John Blair described it, Lyon was taken to the courthouse, where some of the doubloons were broken and "except for a thin plate of Gold on the out Side, were found stark nought."

Blair suspected someone was using Lyon as a front to get the fake money in circulation. Blair put his money on Jackson. A Nansemond County silversmith, Jackson once had been tried for counterfeiting but escaped punishment through, as Blair put it, "some chicanery of the lawyers."

Threatened with trial for uttering the counterfeits— conviction meant death—Lyon told "all he knew." He said sometime Annapolis tavernkeeper Edward Rumney—"aged about 40 Years, of a middle Size, full faced, black Complection, smooth Tongue, and free of Speech, much addicted to playing at Billiards, and Gaming"—took him to Jackson and that he was "drawn in much against his Will."

Jackson told Lyon that he and his brothers John and James made the coins and that "they were little worse than good Ones." Blair issued a warrant for their arrest, but the sheriff found they had fled. Blair guessed John and James Jackson had "gone to the Northward, but" supposed Lowe Jackson "to be gone to North Carolina."

Virginia Council President Thomas Lee issued a hue and cry—a proclamation authorizing the pursuit and capture of suspects. It charged Lowe Jackson, a carbuncle-faced young man of about five- feet-ten, "with coining, counterfeiting, and uttering many base double Double-Loons." His brothers, one a watchmaker and the other a blacksmith, "are strongly suspected of being concerned in the said Treason." Rumney, who Lee thought had gone to Maryland, too, was accused "with aiding and assisting." Lee offered a £50 reward for Lowe Jackson and £20 for the other three.

Authorities captured Lowe Jackson in Charlestown, South Carolina, and the Virginia Council sent Edmund Ruffin to bring him back to Williamsburg for trial. What became of the other fugitives, we do not know.

Before a crowd, Jackson was tried in the General Court on April 16, 1751. The record is gone, but it appears Lyon's testimony was discredited. The jury, deliberating until "between 6 & 7 in the Evening," convicted Jackson anyway.

Within days, there was talk of a new trial. The Reverend David Masson and other prominent Williamsburg people thought Jackson should be pardoned. Lewis Burwell, now council president, had power to pardon "fit Objects of Mercy, Treason and willfull Murder only excepted," wrote a letter to the Duke of Bedford begging for the king to pardon Jackson, and granted a reprieve until the king's pleasure was known. He said Jackson was a young man who was seduced by Rumney, "an infamous Villain who had the Art of Counterfeiting Coins and put this Youth upon it." Carter Burwell of Carter's Grove also wrote on Jackson's behalf. Blair and the other councilors disagreed with Burwell, however, and wrote the duke opposing a pardon.

Newly arrived Governor Robert Dinwiddie examined the trial record and said that the "Tryal I find was conducted with much Candour & Impartiality" and "I cannot possibly join the President in Soliciting his Majesties Pardon & do think the Councills Remonstrance & Representation of the Affair is perfectly Just." The king declined to intercede.

April 13, 1753, after languishing in the Williamsburg jail for nearly two years, Jackson was executed "at the Gallows near this City." The Pennsylvania Gazette reported:

He was drawn on a Sledge from the Prison to the Place of Execution where he addressed himself to the Spectators, in a very moving and pathetic Speech on the fatal Consequences attending an early Habit of Vice, which had been the Means of bringing him to that shameful and untimely End. He appears with a Composure of Mind, not frequently attending Men in his unhappy Circumstances, and died in a very penitent Manner. His body being put into a Coffin, with this Inscription, Mercy! Triumph over Justice, was delivered to his Friends, and is to be interr'd in the County of Nansemond, where he was born.