Fields of Fire—Four Views of the Fatal Day 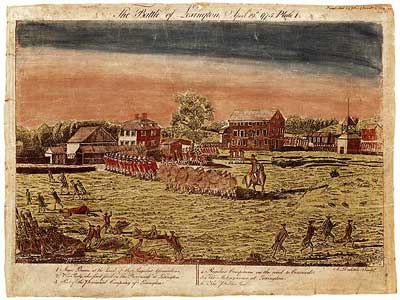 Between the skirmishes at Lexington and Concord and the Battle of Bunker Hill, the militias of New England soldiered into Cambridge, across the Charles River from redcoat-held Boston, and waited for something in the way of fighting to do. As the days turned to weeks, some got tired and went on back home.

Among them were two Connecticut provincials, Amos Doolittle of New Haven, who had just turned twenty-one; and Ralph Earle of Bolton, who had become a husband in September or October and a father in January 1775, and had just turned eighteen. Doolittle, and apparently Earle as well, though Earle turned out to be a loyalist, served in the Governor's Second Company of Guards, forty men at the place commanded by Captain Benedict Arnold. They reached Cambridge on April 29, and in May obtained leave to visit the locales of the April 19 engagements with a view to recording the scenes of that day. Doolittle, a silversmith ready to try his hand at picture engraving, directed Earle, a portraitist, to sketch and paint the countryside, filling in the troops and fighting from details Doolittle collected from witnesses. Sometimes Doolittle posed on the battlefields with a musket—if "battlefields" is not too grand a word.

Back at his shop on College Square near Yale, Doolittle translated Earle's work into metal. December 13 he was ready to sell prints, plain or colored, in sets of four, "neatly engraved on copper from the original paintings taken on the spot." The Dictionary of American Biography says, "In this he seems to have been his own instructor." Indeed, there is a folk-art quality to the work.

Doolittle mistook some details of equipment, uniforms, formations, and dispositions and sometimes depicted too many events at once—he said he condensed time to show as many as possible at each location. But, as they appear on the following pages from a set in the collection of the Connecticut Historical Society at Hartford, they are credible. Moreover, because Earle's paintings are lost, they are the only contemporary portrayals of what happened the day that was fired the shot heard round the world.

In Doolittle and Earle's view of Lexington Green from its northwest side, provincials scramble for safety as advancing light-infantry regulars shoot. At the top, the main redcoat grenadier column files on toward Concord. None of the Americans are blocking the redcoats' path. Courtesy of Connecticut Historical Society. 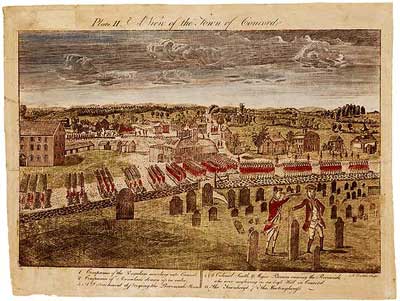 The regulars march along a road below a ridge in the center of Concord on which, at right, stand Major John Pitcairn and Lieutenant Colonel Francis Smith monitoring the movements of the American militia gathered on an opposite rise. The town—its meetinghouse at right—is undefended. Courtesy of Connecticut Historical Society. 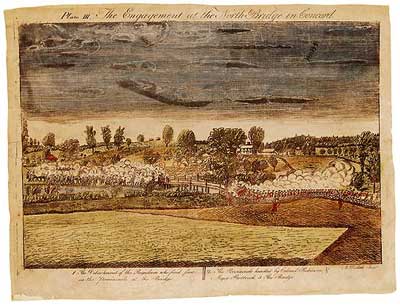 Fleeing regulars, atright, and advancing provincials, at left, exchange fire across the Concord River's north bridge. Redcoat Captain Walter Laurie thought the first shot came from one of his men deployed to the left of the span. Lieutenant William Sutherland said one of the "Country people" pulled a trigger before any lobsterback. Courtesy of Connecticut Historical Society. 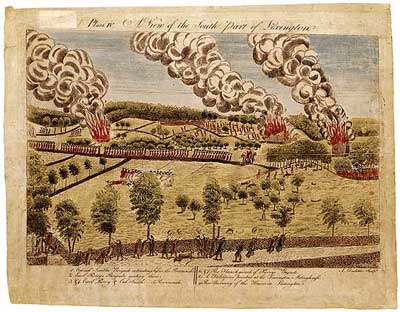 A reinforcement column of 1,000 regulars, at left, commanded by General Hugh, Earl Percy, rescued Smith's redcoats as they returned from Concord. Repeatedly ambushed on the march by militiamen like those in the foreground, at Lexington Smith's panicked soldiers gained the protection of Percy's two cannons, one shown here firing toward Lexington Green from the copse of trees at center right. The redcoats torched three houses from which they thought snipers had fired. Courtesy of Connecticut Historical Society.