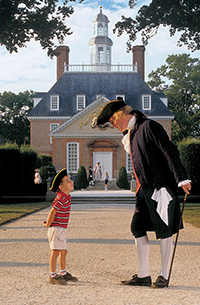 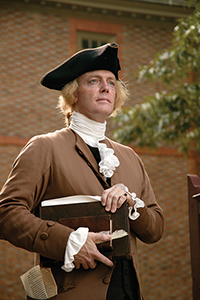 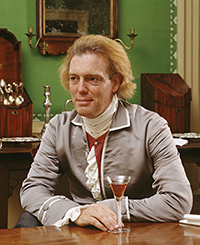 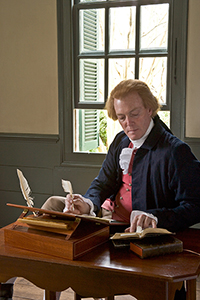 Peopling the Past: Meet Thomas Jefferson

Thomas Jefferson returned to Williamsburg in October 1776 for the first time since finishing the final draft of the Declaration of Independence that July in Philadelphia. Bill Barker, Colonial Williamsburg’s Mr. Jefferson, discusses, in character, the document, reaction to it, and his hopes for its long-term effects here and abroad.

Mr. Jefferson, welcome. What brings you back to the capital?

The new House of Delegates is in session, and I am the representative for Albemarle County. We members of the legislature have much to do. The chief matter at hand is the disestablishment of all forms of an aristocratic, monarchical system of government, and the installation of a democratical, republican one.

Have people asked about the Congress and its Declaration?

People are curious about the meaning of the Declaration. When queried, I respond that it has one all-encompassing idea—we are all born free in nature. Therefore, we have an inherent right to our own destinies. I frequently note, too, that the Declaration does three important things. It presents a philosophy of forming a government, enumerates our grievances with Great Britain, and seals the compact of thirteen former colonies. Reactions? They are a mix of exuberance for the possibilities the Declaration offers, and caution concerning the conflict we now face.

You did the writing. Was it a difficult assignment?

You are correct. I did write the drafts in a parlor on the second floor of a building at Seventh and High Streets. When Congress formed a five-man committee to prepare a declaration, I initially did not see myself fulfilling the role I assumed. I believed that Benjamin Franklin should author the work, but he declined. John Adams insisted I do it, noting my writing ability and the need to have a Virginian deeply involved in the process. Was it difficult? Well, sir, I wrote for three days to produce a four-page paper.

Are you proud of what you wrote?

Sir, in truth, I merely captured the sentiments of Congress. I should note, too, that my satisfaction with the Declaration is balanced with a realization that in committing it to paper, I possibly was writing the death warrant of myself and every man on the committee. If we lose the war for freedom, we will be hanged or shot. Mr. Patrick Henry expressed our position perfectly when he said, “Give me liberty or give me death.”

Did the committee get along?

Yes. I should note that Dr. Franklin and Mr. Adams had the greatest involvement. There was some give-and-take. We did discuss some minor changes—altering phrases, replacing words. That sort of thing. Yet everyone was amicable and comfortable with the draft we presented to Congress.

How did Congress react?

The meat of the matter is that the members were pleased. Certainly, they made alterations and deletions on July second, third, and the morning of the fourth. Slavery was the only truly contentious issue. In the first draft, I attacked King George III for creating and sustaining the slave trade, a practice I referred to as “a cruel war against human nature,” and inciting slaves to rise against their owners. Delegates from South Carolina and Georgia objected to the issue being raised. So it was stricken from the document.

As a slaveholder, your ideas on the trade may surprise some.

Perhaps. Though, I tell you, sir, that we must put an end to this corrupt business, which is an offense to our Creator. Slavery will not end tomorrow, but we will push until it does. Please keep in mind that I have called for an end to slavery in the constitution for Virginia.

What do you think will be the Declaration’s legacy?

I hope it opens eyes around the globe to the inherent rights of man and the principle of self-government. In the years ahead, I imagine that the world will recognize that we are a new type of nation or, as the Romans would call us, novus ordo seclorum —a new order of the ages.