The Occasion of the Queen's Return 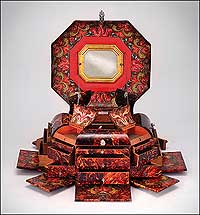 Since Elizabeth II came to Virginia's Historic Triangle the first time, fifty years ago, 116 queens, kings, premiers, prime ministers, emperors, and empresses—not counting five American chief executives and more than 160 ambassadors—have followed her example. Some of them twice. No visit, however, has been more memorable than hers, and no return could be more agreeable.

Queen Elizabeth comes again this year, as she did in 1957, to commemorate the Anglo-American bonds created in 1607, when, at Jamestown, the Virginia Company of London established England's first permanent New World settlement. After she had marked Jamestown's 350th anniversary, and before she left for Washington to see President Eisenhower, she presented to the Colonial Williamsburg Foundation a seventeenth-century jewelry box from her collections. Now on display at the DeWitt Wallace Decorative Arts Museum, it is a treasured remembrance of the occasion. So are a few words she spoke from the balcony of the restored Wren Building at the College of William and Mary:

Here at a great period in your history, descendants of your forefathers and my countrymen proclaimed their faith in certain great concepts of freedom, justice, law, and self-government. Those concepts have had a profound influence on the political development not only of the United States but of all freedom-loving countries. This magnificent restoration of Colonial Williamsburg is a constant and vivid reminder of those principles...If it inspires us all to closer cooperation in fulfillment of these common ideals, then Williamsburg will have done more than dramatize history and rebuild the past. It will have helped to build the future.

As she knew, "That the future may learn from the past" is the maxim that guides Colonial Williamsburg. Now, as then, it is our mission.

For all that has changed, and all that will change, however, much remains the same, and shall. Our commitment to teaching the principles of freedom, to providing education for citizenship, to showcasing the development of self-government is as strong now as then.

Colonial Williamsburg, like Jamestown, respects its English heritage. This is, after all, the restoration of an eighteenth-century English capital, an educational institution that named its highest award the Churchill Bell. But of special importance to us are what we have made, what we are making, and what we will make, of that heritage. For four hundred years, the American experiment has been building on the foundation of that inheritance. It is a legacy of values bequeathed in 1607 to what from the start has been an increasingly diverse population for safekeeping, and refinement.

The essence of those values was aptly expressed in a toast our president made to Her Majesty at a White House dinner during her first sojourn among us: "to stand steadfast behind ...a belief in the rights of man." The occasion of the queen's return early this May is an opportunity for all Americans to celebrate with her the excellence of that belief. We shall give her a royal welcome.