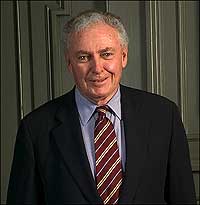 The inauguration of Virginia's governor at our reconstructed Capitol, the debut of our Revolutionary City program, and the 2007 Jamestown commemoration are linked by a common theme—the role of the citizen in a self-governing society.

The swearing in of the Commonwealth's seventieth chief executive celebrated citizen participation in government. The Revolutionary City encourages guests to explore the citizen's role in events that created our states. When the reconstructed Godspeed sails up the East Coast to herald next year's 400th anniversary of the first permanent settlement in English America, the dawn of representative democracy in North America will be a dockside program focus. There are in this journal, and elsewhere, articles about all three.

News of the inauguration spotlighted Williamsburg and what happened in the Historic Triangle during the colonial era. Better, it pointed up ties between Jamestown, Williamsburg, and Yorktown, and democracy's challenges today. Press attention complemented our efforts to make a visit to the past more inviting, inspiring, and relevant.

More than two years ago my colleagues and I began to discuss ideas collected from guests. Our twenty-first-century audience wants emotional connections between their lives and our presentations, more opportunity for engagement. Our mission—that the future may learn from the past—underscores the importance of those connections.

Their advice led us to the Education for Citizenship concept, which became the core of our program development, on and off site, and provided the blueprint for the Revolutionary City. Its theme, "From Subjects to Citizens," emphasizes citizen engagement, asks guests to rethink their civic roles and responsibilities, and encourages greater participation in the American experiment.

There is reason for concern. Voting is the original instrument of self-government and central to citizenship. The number of people who do not vote is alarming. A lively campaign preceded the pivotal election that culminated in the Williamsburg inauguration. Yet barely 45 percent of Virginia's voters turned out.

Emphasizing the connection between the rights secured by the Revolution and a citizen's responsibility is Colonial Williamsburg's goal. The rhetoric of George Mason, Thomas Jefferson, Richard Henry Lee, and others in eighteenth-century Williamsburg decried the inequities of royal rule and demanded citizens face them. Their words are as timely in 2006 as they were in 1776. The ideas that set Williamsburg apart then are the message of our Revolutionary City today. The phrase "Subjects to Citizens" describes it well.

As Governor Tim Kaine said in his Historic Area inaugural address: "Our challenges today are different than those faced by the Jamestown settlers, or the first Virginia governors. But they require fidelity to the same values." My italics.

The representative democracy advanced in Williamsburg 230 years ago renewed itself with the swearing in of a governor in that setting; Colonial Williamsburg has set out to renew itself by making Education for Citizenship the theme of its educational offerings.