CW Journal : Spring 04 : The Throne of the Third Heaven of the Nations' Millennium General Assembly 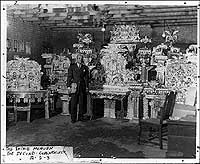 Part of the passage in the reference to Corinthians in Hampton's photo speaks of "a man in Christ ...caught up to the third heaven ...whether in the body, or out of the body, I cannot tell: God knoweth."

Tucked away in a softly lit Abby Aldrich Rockefeller Folk Art Museum alcove, the foil-covered hosannas of St. James, Director for Special Projects for the State of Eternity—as janitor James Hampton styled himself—shimmer in cascades of reflected glory. A night employee of the General Services Administration in Washington, Hampton labored after work in a rented alleyway stable, fashioning from materials scavenged on the job, bought in secondhand stores, and found on the streets a symmetrical three-tiered testimony to "The Revelation of Saint John the Devine." He intended, when he was done, to open a storefront ministry with the 180-component liturgical assembly for its centerpiece. Begun about 1950, the toil went on fourteen years in the hours after midnight.

Born the son of an itinerant, self-ordained minister and gospel singer in 1909 at Elloree, South Carolina, Hampton migrated when he was nineteen to the District of Columbia. There he had visions, which he recorded. The earliest note of one that survives reads: "This is true that the great Moses the giver of the 10th commandment appeared in Washington DC, April 11, 1931."

Hampton lived with a brother and worked as a short-order cook until the army drafted him in 1942 for the Second World War, made him a carpenter, and sent him, among other places, to the Pacific. On Guam, he built a small shrine-like object, perhaps a precursor, which he incorporated in his later effort. Hampton returned to Washington in 1945, and moved into a boarding house. He began a career with the GSA in 1946, when he recorded another vision: "This is true that on October 2, 1946, the great Virgin Mary and the Star of Bethlehem appeared over the nation's capital."

The "No. 1" crown Hampton fashioned for The Throne of the Third Heaven shrine bears a citation from Revelations 7:3, in which one angel tells four others: "Hurt not the earth, neither the sea, nor the trees, till we have sealed the servants of our God in their foreheads." 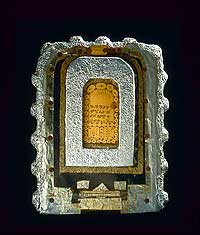 This tablet records the date of a vision in which Hampton saw "the great Moses" appear in Washington, D.C. Much of the rest of the inscription is composed in Hampton's secret alphabet, but it appears he had the Ten Commandments in mind.

He stayed in the boarding house the rest of his life. He never married—said he couldn't find his "Holy woman"—but he believed he had the best companionship for which a man could ask. God, Hampton said, instructed him each night as work on The Throne of the Third Heaven of the Nations' Millennium General Assembly advanced toward the dawn.

The title of the fabrication may reveal Hampton's vision of the heaven of the sky, the heaven of the planets, and the heaven of the Almighty, and the gathering of the nations foretold for when Christ returned at the end of days. Then, according to the New Testament, the deity, attended by angels, is to appear on a throne to reign over the New Jerusalem.

At bottom a maroon-cushioned easy chair, the monarch's seat, with the biblical injunction "Fear Not" at its crest, stands on a three-foot-high wooden platform perhaps intended to resemble the stage or sanctuary of a church. Flanking slanted-top pulpits suggest Hampton was preparing places for preachers or speakers in his tabernacle. There also are mercy seats, pedestals, plaques, altars, and offertory tables, some bearing Bible names and passages.

Hampton built his masterwork of metallic foils, paper, plastic, strips of metal cut from coffee cans, jelly jars, flower vases, lightbulbs, wood furniture, cardboard, conduit, glue, tape, tacks, and pins. The foil-wrapped bulbs are a poetic reference to Jesus as the light of the world. When dust settled on the objects, Hampton recovered them instead of cleaning. 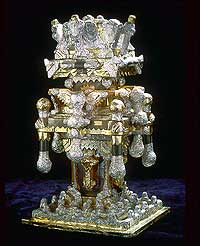 The stand is from the first rank of the three-tiered assembly, its foil-wrapped electric bulbs an apparent poetic reference to the deity as the light of the world.

He said of his project, "That is my life. I'll finish before I die." There were, however, leftover pieces and spare parts when he passed away, never having opened his church, in 1964. No one knew of Hampton's creation save his landlord, who took possession of it all in lieu of back rent. He also got a collection of encoded writings, kept in ring binders or on clipboards, penned by Hampton in a secret alphabet, that have yet to be deciphered. Among them is The Book of the 7 Dispensations by St. James, each page of which ends with the word "Revelation." Colonial Williamsburg has had Hampton's handiwork—he called it a monument to Jesus—on extended loan from the Smithsonian American Art Museum. The AARFAM installation is to close in the summer of 2004, so there are but a few months left to see the present exhibit. 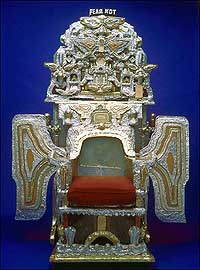 The centerpiece of Hampton's creation, a winged throne crowned by the injunction "Fear Not" bears a series of messages of Hampton's invention.

The Throne of the Third Heaven