When Tut Went Phut;
or, The Day Mr. Junior Changed His Mind 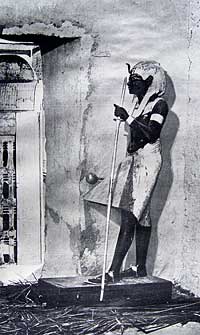 In 1922, when Tutankhamen’s tomb was discovered, John D. Rockefeller Jr. was already an enthusiastic promoter of American Egyptology.

Headlines like these poured from newsrooms and tickertape machines around the world. The public was agog with vicarious excitement. Tut songs, Tut dances, and Tut jokes were the rage of 1923. Not to be left out, in sleepy post-World War I Williamsburg, the corrugated iron door of a Duke of Gloucester Street garage invited customers to “Toot-an-Cum-In.” None who saw the sign could have imagined that archaeological digging in faraway Egypt could threaten to change the future of their town. But it very nearly did.

Ever since Napoleon included scholars in his invasion of Egypt in 1798 and his defeat by the British in the Battle of Alexandria in 1801, the story of archaeology in Egypt has been dominated by national rivalries. In the nineteenth century it was between the British and French-with the French winning virtually every round. In 1902, however, a charismatic American Egyptologist named James Breasted secured a $50,000 grant from John D. Rockefeller Sr. to excavate in the Middle East. Seven years earlier Breasted had been named the United States’s first professor of Egyptology where he taught, at the University of Chicago. And he had a dream.

Breasted wanted to establish a great center for Egyptological study at his university, and in 1919 he told his seductive tale to John D. Rockefeller Jr., who, during the next decade contributed more than $1 million to create and foster the university’s fledgling Oriental Institute. In 1923, after a thirteen year absence, the Reverend Dr. W. A. R. Goodwin returned to Williamsburg from his pastorate in Rochester, New York, and he, too, had a dream. He wanted to restore Williamsburg to its glory years as the capital of the Virginia colony, and the man to do it, or so he thought, was Henry Ford.

Goodwin had previously written to Mr. Junior-as John D. Rockefeller Jr. was known to his associates-and invited him to contribute to the restoration of the College of William and Mary. The reply came from his private secretary, declining the invitation, saying that “it was not best for Mr. Rockefeller to assist at this trying time.” The time, however, was not too trying to prevent him from continuing to bankroll Breasted’s Near Eastern projects at a level of $10,000 per annum, and a year later to increase it sixfold. In 1924 Mr. Junior would contribute $60,000 to enable Breasted to excavate in Palestine at the site of the ancient city of Megiddo. Rockefeller would later allow that his growing interest in archaeology was entirely due to the influence of James Breasted.

While the Egyptologist’s dream was becoming a funded reality, Dr. Goodwin’s vision remained pennilessly transparent. His appeals to Fords, both Henry and son Edsel, bore no fruit. Having been run into by a Ford car while in Rochester, it is possible that Goodwin was a mite too aggressive in his approach. After extolling the virtues of Williamsburg as the heartland of American history, he chose browbeating: 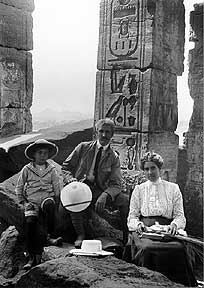 Oriental Institute of the University of Chicago

”Breasted’s approach was, as we say today, less in your face. Mr. Junior found him a “charming gentleman and a distinguished scholar, with the modesty of the truly great.” Consequently, when Breasted made his most ambitious proposal, Rockefeller’s coffer remained open.

The Cairo Museum of Antiquities had been built in 1902 to the design of French architect Dourgnon, replacing one founded in 1858 by the great French archaeologist Auguste Mariette and filled by his successor, Gaston Maspero. It was not surprising, therefore, that the museum’s labels were in French. The building was also poorly arranged and damp, and its basement storerooms prone to Nile flooding. Consequently, Breasted invited Rockefeller to build a great new museum that would do justice to the newfound treasures of Tutankhamen and provide better housing for all that had previously been collected. And again Mr. Junior agreed. 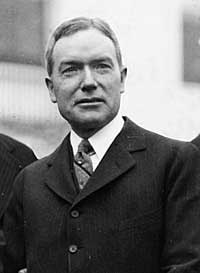 In 1924 he set philanthropic funds aside for that project, instructing Breasted to oversee the planning as well as to make the first approach to the Egyptian government. In October 1925 Breasted took his plans and a handsome brochure to Egypt along with a letter from Rockefeller to King Fuad expressing his abiding admiration for Egypt’s ancient heritage and offering a helping hand containing $10 million. In those days that was an enormous sum and one capable of answering all Dr. Goodwin’s prayers, with more to spare.

Alas, in Williamsburg no angels sang. Henry Ford’s well-known opinion that history was bunk was echoed by his spokesman, who answered Goodwin saying that his employer was “unable to interest himself in the matter mentioned.” In February 1925 Goodwin again turned to Rockefeller, inviting him to visit Williamsburg, adding that “You can bring your pocketbook, or leave it behind.” Goodwin was not the subtlest of men. Mr. Junior graciously declined.

And so did King Fuad. The proposed $10 million donation to build a new Egyptian Museum was unacceptable in its present form, Breasted was told. The plan had called for the finished museum to be administered by an eight-member commission: two Egyptians, two from the United States (one of them Breasted), two British, and two French. And that was the problem. Since the British Howard Carter had discovered Tutankhamen and Breasted had found Mr. Junior, the French would lose their controlling interest in Egyptian archaeology.

Back went Breasted to New York with a string of revisions that said nothing about French pique. Rockefeller was not amused but agreed to try again. Before the revisions could be made, however, a reporter for the New York Sun got wind of the stalled deal and published tongue-in-cheek letters to the king. “How many million dollars does it take, Fuad, to make you jump?” reporter Amos P. Pipp wanted to know. If Mr. Rockefeller “offers you money for a museum he means a museum and will not attempt to add on a couple of big wings for oil stations.” Always a private man, Mr. Junior did not appreciate the Sun’s attention. Nevertheless, he authorized Breasted to return once again to Cairo-where he met with more prevarication and a new set of demands.

The proposal offered $5.4 million for construction and $4.8 million for subsequent operating costs. But John D. Rockefeller’s Jr.’s patience was exhausted. There would be no $10 million for the Cairo museum and the pseudonymous Amos P. Pipp provided its epitaph. “You see what you went and done!” he wrote. “King, you spilled the beans. What you need is a business manager.” That was May 4, 1926. Six months later, Mr. Junior visited Williamsburg to attend the dedication of the Phi Beta Kappa Memorial Hall and provided Goodwin with a not-to-be-missed opportunity. And of course he didn’t. 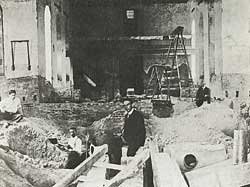 Dr. W. A. R. Goodwin's experience as an amateur archaeologist had been gained in 1905 while digging under Williamsburg’s Bruton Parish Church

If Goodwin had read about the debacle in Egypt, there is no record that he mentioned it when he guided Rockefeller around the remnants of eighteenth-century Williamsburg. It is highly likely, nonetheless, that he mentioned the magic word archaeology as he described the excitement of restoring the Christopher Wren Building, the reconstruction of the Raleigh Tavern, and the acquisition of historic sites and buildings. Goodwin had done his own archaeology inside Bruton Parish Church before its 1905 renovation, and one of his favorite books was the Reverend Frank D. DeHass’s 1884 Buried Cities Recovered or Explorations in Bible Lands. It is safe to assume, therefore, that before he was through, Goodwin had rung Mr. Junior’s archaeological bell. 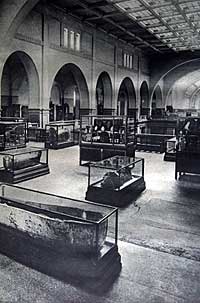 Goodwin’s success as a promoter followed Rockefeller’s 1926 decision not to build a museum in Cairo to replace the antiquated displays then to be seen there.

The rest, as they say, is history.

On more than one occasion Rockefeller said he was prepared to spend up to $5 million on the preservation of Williamsburg, but not a dime more. “Five million dollars,” he said, “is a very large sum of money.” Indeed, in those days it undeniably was.

From where, we may wonder, did that five million figure come? Was it the $5.4 million that King Fuad had let slip through his fingers? Had Professor Breasted succeeded in getting Fuad’s minister’s signature on the revised proposal, would Mr. Junior have been willing to share his interests in the grandeur that was Egypt with a matching concern for the future of a run-down, half-forgotten town in Virginia? We shall never know.

We do know, however, that the first archaeologist hired to dig in Williamsburg was one Prentice Duell, an architectural draftsman who stopped by for several months while on his way to another job. He was headed to Egypt to draw tomb paintings on behalf of Breasted and his Oriental Institute, funded, of course, by John D. Rockefeller Jr. As for the long criticized Cairo museum, it is now a hundred years old, a legally defined antique, and according to a recent guidebook, “It may be the worst great museum in the world.” 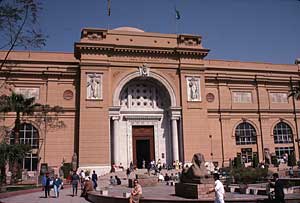 Built to a French design in 1902, the Cairo Museum had changed little when the author first visited it sixty years later. 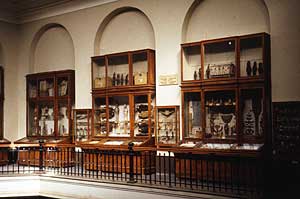 Inadequate labels, poor lighting, and no climate control prompted one guidebook to conclude that “in terms of display, it may be the worst great museum in the world.”