Something Approaching a Parable 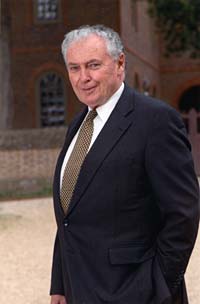 The Colonial Williamsburg Foundation's mission is to tell the story of how the idea of America emerged in one eighteenth-century capital. Our goal is to provide for tomorrow, as well as for today, a deeper understanding of the courage, perseverance, and intellect required to reject crown and country and give birth to a new nation.

Parts of that story are told by this journal. Parts of it are told through our distance learning programs, and in our teacher institutes. But the Historic Area is the place where we pull the threads of Williamsburg history together in a tapestry of the life and culture of an eighteenth-century town. It provides a context in which to appreciate how Patrick Henry and Thomas Jefferson, James Madison and George Washington, and all their daring colleagues put Virginia and the nation on a bold and uncertain course toward freedom and independence.

From the day more than seventy-five years ago when Williamsburg's restoration began, the foundation's aim has been to preserve not just the buildings but a community-a community of memorable men and women, of philosophies and ways of living, of belief and experience.

Our purpose was related as well as anywhere on the front page of the local newspaper, the Virginia Gazette, in a winter interview with master boot and shoemaker, D. A. Saguto. Historic trades are an essential part of our educational program; people are fascinated by tasks performed by hand, and Saguto is among the few craftsmen in the world who still fashion footwear entirely by hand. He practices eighteenth-century techniques and skills in a small Duke of Gloucester Street shop. More important to him, however, is passing those techniques, those skills, his art, on to his apprentices. Saguto, you see, creates more than shoes, he creates shoemakers, new heirs of their colonial counterparts.

In microcosm, that is what Colonial Williamsburg is about. It does more than preserve the past; in a manner more comprehensive, more tangible, more immediate than at any other museum, it maintains a living legacy.

Let me share with you a letter that vividly makes the point, something from journal reader Eunice R. Campbell of Andover, Massachusetts-no relation. A Writing Group member at the Andover Senior Center, she penned for her friends and shared with our magazine a story approaching a parable.

Strolling the Historic Area one damp, dreary morning with her daughter Nancy and her son-in-law Frank, she came upon "a quite ordinary young man in his late twenties, and a small lad, about six, presumably his son. The father was attempting to find a dry spot for the two of them on one of the rain-soaked wooden benches that line the street. There was nothing unusual about their appearance, nothing to alert me to the fact that I would remember them from that day to this.

"By the time we reached them, both father and son had settled. Paying no attention whatsoever to the people passing, the father was reading to the child. Our steps slowed as we heard the text: ïWe hold these truths to be self-evident, that all men are created equal. . . .' Though I wanted to stop and listen, I realized that I could not intrude upon such an important moment."

Ms. Campbell doubts the boy's memory of that morning will endure, but she is certain his father's will, and someday he will tell his son "about the day they shared a wet wooden bench on the Duke of Gloucester Street in Williamsburg, Virginia, while he read him the Declaration of Independence.

Our mission, our goal, our purpose, is distilled in the shoemaker's shop, and in Ms. Campbell's anecdote, and in our motto: "That the future may learn from the past."