Asynchronous (Adjective: Not coinciding in time)

Eighteenth-Century Clothes for a Twenty-First-Century Pose

Brooke Barrows models a long-sleeved neoclassical white-linen chemise of the late eighteenth century with a pink-and-gold striped sash, all constructed by Colonial Williamsburg's Millinery Shop, where she is an apprentice.

Editor's note: The journal took an offbeat proposition to Colonial Williamsburg photographer Tom Green and producer Abigail Schumann: How about a show of eighteenth-century fashions shot in the twenty-first-century style of, say, Vogue, or Glamour, or the New York Times Magazine? From headgear to footwear the clothes would be 1700s high-style authentic, but the poses would put them and the models in a decidedly 2000s context. The magazine's careful attention to historical verisimilitude would, this once, take a back seat to an ersatz haute couture. The we-don't-always-have-to-take-ourselves-so-seriously idea was to experiment, to have a bit of fun, to push the envelope, and maybe to raise an eyebrow or two. Collaborating with Brenda Rosseau, manager of Colonial Williamsburg's design center, freelance make-up artist Sharon Barrett of Richmond, and Tom Hammond, supervisor of costume research and design, Green and Schumann produced the results, from gracious to Goth—no letters, please, about the Goth—that appear in these pages. Below, Rosseau and Linda Baumgarten, curator of costumes and textiles, provide historical background for the outfits.

In the eighteenth century, "dressing up" meant displaying luxurious textiles trimmed with the finest handmade flourishes. Manual laborers had to wear clothes that were practical, comfortable, and relatively cheap, but people with social standing and money could dress very well, indeed. Society expected as much.

The gentleman's three-piece suit was a waistcoat or vest, skirted coat, and knee-length breeches to show off shapely legs. For dressy occasions, men were not averse to wearing satins and velvets embellished with handmade lace and elaborate floral needlework. Military uniforms and servants' livery were based on the fashionable three-piece suit. These outfits, however, were colored and trimmed to reflect a group affiliation. Livery colors and edgings derived from the master's coat of arms and enhanced the status of the employer, not the servant.

Women's fashionable gowns emphasized trim torsos atop broad hips. The foundation for the fashionable figure was a pair of boned stays laced over the upper body to create a cone shape and push the breasts up into high, rounded mounds.

For formal wear, hoops or petticoats with built-in caning held the skirts away from the body at the sides. The dressier the occasion, the broader the skirt. For less-formal occasions, women often chose jackets and petticoats with more modest dimensions. Fashion is never static, however. By the late eighteenth century, women began to wear slender white gowns inspired by neoclassical styles, and men adopted dark-colored plain suits with pristine white shirts. An era had ended. 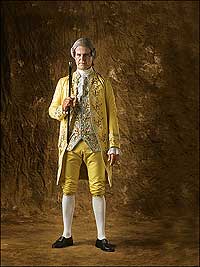 Actor-interpreter Dennis Watson wears a yellow-silk floral-embroidered coat and breeches with a coordinated white-silk satin waistcoat. The embroidery pattern is taken from a purple-silk court suit in Colonial Williamsburg's collections. 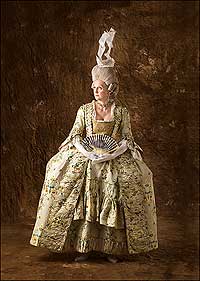 Orientation interpreter Cindy Gunther shows a cream-and-blue floral brocade gown with a gilt bobbin-lace-trimmed stomacher inspired by an antique in the collection of the Costume Institute in Kyoto, Japan. Colonial Williamsburg's Wig Shop made her wig. The silk ship that tops it, based on a period illustration, is from Colonial Williamsburg's Costume Design Center. 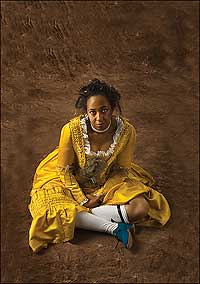 Actor-interpreter Hope Smith poses in a bright yellow silk satin Brunswick—a style of matching petticoat and sack-back jacket—decorated with blue silk and organdy bows and finished with blue-silk-covered heeled shoes by Sara Juniper. This garment is a replica of an antique at the Costume Institute of the Metropolitan Museum of Art in New York City. 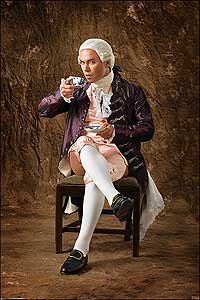 Actor-interpreter Scott Green wears a lace ruffled shirt and stock under pink satin smallclothes with a purple taffeta coat embellished in silver embroidery and spangles. The embroidery design is taken from a suit in Colonial Williamsburg's collections. 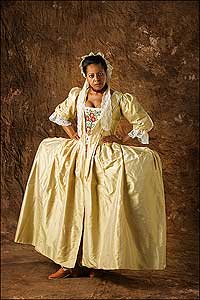 Actor-interpreter Janine Harris models a pale-yellow changeable silk mantua and extreme side hoops of the 1740s with a brown-silk quilted petticoat, wool-embroidered-on-linen stomacher, hand-built rust-silk-covered heeled shoes with buckles and a lace lappet cap, all from Colonial Williamsburg's Millinery Shop. 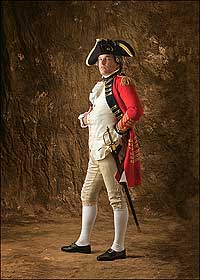 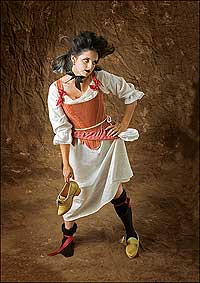 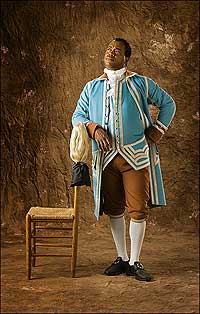