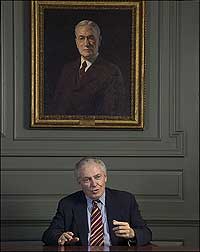 Colonial Williamsburg, an institution focused on the opening chapter and the continuing relevance of the American experiment, has written some instructive history of its own. Embarking on the first restoration of an entire town, the organization pioneered the application of construction, preservation, research, interpretive, and educational techniques to such a comprehensive project—originating ideas that, with more than seventy-five years of innovation and refinement, still serve Colonial Williamsburg and its guests well. An illustration is the concept of the revolutionary-era community as a place to explore the beliefs and values from which America was created, a place to educate its citizens, by precept and example, in the principles of freedom.

The Reverend W. A. R. Goodwin, who in 1926 interested John D. Rockefeller Jr. in the possibilities of reviving the eighteenth-century capital, spoke of the result as "a shrine of liberty and of beauty ...dedicated to the lives of the nation builders."Rockefeller highly valued "the lesson that it teaches of the patriotism, high purpose, and unselfish devotion of our forefathers to the common good."

Colonial Williamsburg's citizenship-education potential was well demonstrated in World War II, when hundreds of soldiers and sailors in basic training visited the Historic Area daily to be reminded of what they would fight for—the rights of free men and women.

The victory they secured, the peace they won, was too soon threatened by a philosophy that denied those rights. In the clash of communism and self-determination began the Cold War. And Colonial Williamsburg considered again what it might do in defense of truths self-evident.

Staff and supporters formed a Special Survey Committee to discuss how the restoration might "play a more active and useful role in the world," and "visualize the areas of opportunity and responsibility." In February 1951 the committee submitted a report that canvassed American concepts advanced in early Williamsburg, detailed threats to them, and identified changes required to meet the challenge. Even a half-century later, the document makes thought-provoking reading. The concepts identified with 1700s Williamsburg were individual dignity, integrity, liberty, and responsibility; opportunity, reason, self-government, humanitarianism, and faith. The report insisted that "to strengthen democracy," attention must be paid to such problems as discrimination, citizenship and leadership failures, nationalism, intolerance, and the waning moral influence of religion, school, and family. The committee recommended "development of a program which will stimulate such thinking on the American heritage as will lead to constructive action."

Such exercises in self-examination, of identifying new opportunities and evolving responsibilities, informed decades of remarkable programs at Colonial Williamsburg, dozens of efforts from the first Prelude to Independence conference later that year to today's National Institute of American History and Democracy in partnership with the College of William and Mary.

Now, with today's opportunities and responsibilities in mind, we envision a most ambitious and inclusive Education for Citizenship initiative, a multilingual, multicultural effort that would emphasize the critical importance of engaged, participatory self-government to the success of the American experiment.

It should be no surprise that the ideas being discussed and debated today are very consistent with the concepts the special committee set down more than fifty years ago when it turned to this old city once more to advance the doctrines of democracy. Clearly an institution founded on the idea that the future may learn from the past can be instructed by its own.