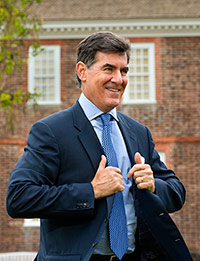 Mitchell B. Reiss
President and CEO

In an election cycle like the current one, it's all but impossible to imagine our Nation speaking with one voice at the polls. Yet that's what happened in 1789, when America's voters unanimously — and enthusiastically — chose George Washington as their first President. Four years later, not a single opponent dared to challenge his bid for re-election.

Oh, what a difference 227 years make.

It was one of the only times in our history when Americans would witness a national election so profoundly unencumbered by politics. Washington's years in office, however, were a different matter. The epic sparring between Thomas Jefferson and Alexander Hamilton, Washington's secretaries of State and Treasury, distressed the President greatly. In that political struggle and others, he foresaw to his chagrin the emergence of two powerful, dueling parties, the Federalists and Republicans.

The influence of partisanship on our Nation's affairs weighed so heavily on the President's mind that he railed against it during his farewell address in 1796: "It agitates the community with ill-founded jealousies and false alarms, kindles the animosity of one part against another, foments occasionally riot and insurrection," he warned. "It opens the door to foreign influence and corruption. …And there being constant danger of excess, the effort ought to be by force of public opinion, to mitigate and assuage it."

These days, anyone with access to a TV, newspaper or the Internet can find the prescient wisdom in Washington's words. Hyperbolic, hyper-partisan rhetoric floods the airwaves, while inside our halls of government, those we have elected to represent us are casting record numbers of party-line votes on even the most complex issues of our times.

"In the 21st century, the United States has entered a new age of partisanship," Emory University political scientists Alan Abramowitz and Steven Webster declared earlier this year. "Sharp party divisions now characterize all of our major political institutions.…Our findings suggest that confrontation and gridlock are almost certain to characterize the policymaking process in Washington for the foreseeable future."

As voters, we are not helping matters. In recent elections, the experts found, Americans have demonstrated "the highest levels of party loyalty and straight-ticket voting" seen in at least 60 years. In so doing, we remove any incentive for our elected officials to listen to one another, to compromise, or even to consider the needs of constituents outside their own party.

This is hardly the picture of representative government which Washington and so many other Americans fought so courageously to establish more than 230 years ago.

But as has so often been said, our democratic republic was begun as an experiment that continues to this day. As such, America possesses a unique willingness to self-examine and a talent for self-improvement. We are forever striving to do better.

It was in this optimistic spirit that Colonial Williamsburg's own George Washington took to the presidential campaign trail this fall. His charge: to inspire all of us, as voters, to engage actively — and thoughtfully — in our Nation's political process.

I should note, perhaps, that it was not in a fit of nostalgia for America's past that we dispatched our Washington to Iowa and New Hampshire. Much as fledgling America may have benefited in 1789 from a strong, wise President who appealed to all voters — a miracle, to modern eyes — we know that this reflected the will of a single demographic — that of property owners, the only Americans permitted to cast a ballot at the time, nearly all of whom were white males over the age of 21. Today, we would never trade the diversity that so enriches this country's electorate, not to mention its culture and its economy, for the comforts of unanimity. But with our diversity has come a deepening of the political fissures that divide us — ironically, strengthening the forces of partisanship that drown out the voices of so many.

As modern Americans, it is our privilege and our responsibility to glean wisdom and perspective from the examples of our forebears, even as we rise to meet challenges they could never have envisioned. President Washington could not have foreseen the sort of electorate we have in America today. Nonetheless, we find in his words inspiration — a mandate, even — to demand fair representation of all of America's voters, and not just those on the winning side.

The time has come once again for us as a Nation to self-examine, and to improve. What better time to try, than in the middle of a national election? Standing together on the broad shoulders of our country's Founders, I believe that we can do it. That we must — and that we will.