by Sally and Roddy Moore 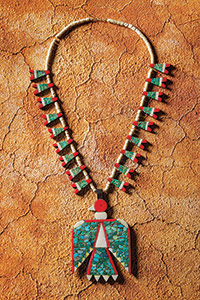 The exhibit blends images of the pieces with early photographs of Native Americans. 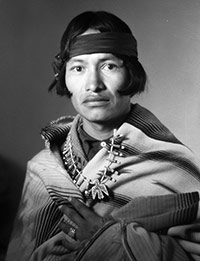 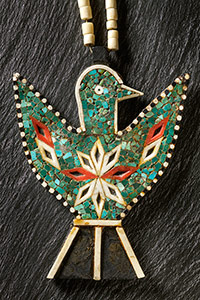 The jewelry's popularity extends beyond the Pueblo. 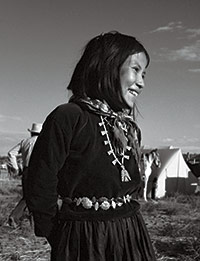 A Navajo girl shows off a Thunderbird necklace. 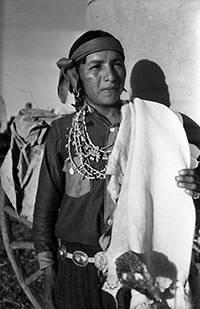 Manuel Nieto wears the Thunderbird jewelry that is part of his Pueblo ancestors' creative tradition. 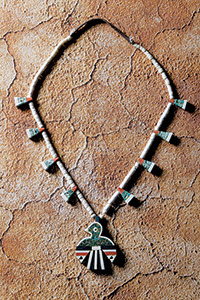 During the Depression, the Pueblo developed a method of jewelry-making that remains largely unchanged to this day

Jewelry-making was a family activity for Pueblo artists.

Their wares were produced for a tourist market.

During a 2007 visit to New York, we stopped at an antique show where we spotted some intriguing Native American jewelry, the likes of which we had never seen before. A far cry from the traditional silver and turquoise pieces — some of which Roddy wears — this unusual jewelry had been fashioned out of plastic!

It was the "folk art" feeling that drew us to them. Eventually we found our way back to that booth, this time with questions about the jewelry. And we found that our "discovery" had practically been right under our noses.

The Santo Domingo Thunderbird or "Depression" jewelry is made by Pueblo people who live close to Santa Fe, N.M., where our daughter has made her home for 20 years. We had driven past the Pueblo every time we visited.

We often bought a few pieces of jewelry on our trips to New Mexico. We weren't interested in collecting rugs or pottery or in building a collection of "significant" pieces of Native American jewelry.

And we certainly weren't looking for a research project.

But as soon as we got home, we began researching this jewelry and found that virtually nothing had been written about it. We found one short article that appeared in a regional monthly newspaper in May 2001. The author, Dr. Rita Yokoi, was married to a Santo Domingo jeweler and his family had made Thunderbird jewelry. We borrowed every book we could find on Pueblo Indian folkways and culture, Native American jewelry or jewelry making, area railroad development and the onset of tourism in the Southwest. We found that when people referred to "Santo Domingo" jewelry, they usually meant heishi — or shell necklaces — rather than the Thunderbird jewelry.

Even eBay proved to be a valuable information source. We could find a range of necklaces for sale and we began printing copies of many of them as references of the different decoration styles.

To learn more about the makers and the way the necklaces were crafted, we had to do our own research. We quickly learned that there was practically nothing in print â€” and very few collectors. What's more, the dealers who handled a number of these pieces apparently knew little or nothing of the history and origins of the jewelry. The basic story was this: The Santo Domingo people made the pieces during the Depression using car batteries and plastic and turquoise scraps, and sold the jewelry to tourists.

But we wanted to understand why.

Thunderbird jewelry doesn't look the way we expect Indian jewelry to look. The Zuni's inlaid jewelry, which features colored stones set in silver, seems closest, but the two traditions aren't really connected. The Santo Domingo history indicates their jewelry-making tradition came straight from their Pueblo ancestors, and today's jewelry-making methods have been relatively unchanged for at least 1,000 years. Zuni history, on the other hand, traces their jewelry tradition to the late 1800s, when their people learned silversmithing from the Navajo.

We met "rock sellers" on our first trip to the Pueblo. Pueblo residents can buy shells, stones and jewelry-making supplies from sellers' trucks in the Pueblo square. This has been a tradition for decades, and since so many of the people there still make jewelry, the practice continues. We soon met a man who asked us whether we were interested in buying jewelry and for the first of many times, we heard the story of families who made Thunderbirds. Since the pieces had been made for sale, most families didn't keep any of these pieces, but on this trip, we were able to buy an older Dance Shell, which gave us a comparison for the decoration on the Thunderbird jewelry.

We soon realized that many of the jewelry sellers under the Portico at the Palace of the Governors at the Plaza in Santa Fe were from Santo Domingo. When Sally wore a Thunderbird necklace around the downtown area, she was often stopped by Santo Domingo women who recognized it and wanted to tell the story of how their family had made pieces like it. These family stories were the basis of many of the details in "Thunderbirds of the Santo Domingo Pueblo," which is now on exhibit at the Abby Aldrich Rockefeller Folk Art Museum. Through these stories, we learned about the materials used, the tools used and the roles that different family members played in the process.

Over the years, we searched the photo archives of all the museums in the Santa Fe area when we were in New Mexico visiting our daughter. We checked used bookstores for out-of-print books and visited small regional museums, as well as the large museum exhibits, always looking for avenues to lead us to new information or photos. And we met amazing "scholar/dealers" throughout the Southeast who shared enormous stores of knowledge with us.

The real eye-opener was an exhibit at the Wheelwright Museum in Santa Fe in 2008. "From the Railroad to Route 66: The Native American Curio Trade in New Mexico" recounted the manipulation of the Native American arts and crafts by the Anglo traders and merchants in the Southwest. They had virtually designed what "Indian" jewelry, pottery and rugs were to be like, in order to sell them to an eager market that they controlled. Not only did they own the trading posts and curio shops, they also did a large amount of mail order business through catalog sales. Beginning as early as the 1890s, they ordered in bulk, buying pottery and rugs directly from craftspeople in order to supply their businesses. By the 1920s, some jewelry that was touted as "Indian made" was manufactured by machines in "factories."

We didn't know how early the manipulation had started and how widespread it had been. It showed that much of the Southwest arts and crafts had been modified by outside influences.

But the Thunderbirds — although produced for the tourist market — had been created by the Pueblo artists. They used their own traditional methods of jewelry making, producing pieces at home, in a family setting with all family members involved. Even though a number of family members helped in the construction of the Thunderbirds, the character of each piece was a reflection of the person who cut out and glued the designs pieces. That's the true folk art.

Roddy Moore is the director of the Blue Ridge Institute of Ferrum College.